Have you ever wondered what we authors look like when we work. Here's a picture of my friend Pamela Tracy at her desk. That's some of her books in the foreground. However, today we're going to feature her Love Inspired Suspense--The Price of Redemption 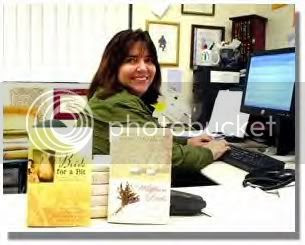 Pamela, tell us how much of yourself you write into your characters.

I wonder if there’s a writer out there who doesn’t write themselves into their characters just a bit. When I’m writing suspense, there’s only a little ‘me’ in the characters. There’s more of the ‘me’ I’d hope to be: brave, dedicated, and adventurous. For example, in this month’s release The Price of Redemption, Ruth takes her daughter to kindergarten. I was a kindergarten teacher for six years, so I’m more the teacher than the heroine. I have two characters who are mothers and they stick around peeking in the classroom door until the teacher shoos them. Been there; done that. In a romance that releases next year, Lucky in Love, I have a heroine who attends a rodeo, and, yup, the rodeo I describe is one I’ve been to. For a short while, it’s not Natalie traipsing through the rodeo, it’s me.

For my writing? I once went to a resort and asked it I could draw one of their suites. I was using it in my book. They let me. So ten minutes later I’m standing in the room drawing, and jotting down notes, and finally I realize that the cleaning staff is a bit apprehensive. Finally, one asked if I was immigration.

Outside my writing? LOL, you want me to pick only one!

During my early years, I wrote short stories about running away and meeting David Cassidy. During my teenage years, I had a friend (Debby Klein) and we would stay on the phone for hours and make up stories about the boys we had crushes on at our local skating rink. That’s probably where I learning brainstorming. Those hours also encouraged my mom to install a teenline (think pre-cellphone days)

I’m reading Hometown Cinderella right now by Victoria Pade. There’s a line in it that states had the heroine not had books, she’d have had an easier time moving. When I married my husband, and we moved to the home we’re in now, I remember him saying, “Why do you have ALL these books?” I love all kinds of books. I read historicals. My favorites are Mrs. Mike, Years, and Gone with the Wind. I love mysteries. I can’t even begin to list my favorites. I’m hooked on Sue Grafton and Patricia Moyes. I love chick lit, hen lit, contemporary, and even young adult. My keepers include Front Porch Princess, the Potluck Club ladies, and Junie B. Jones.

Right now I spend most of my time writing for LI, but in September I had a prayer book out from Barbour. My second prayer book. I also write novellas for them. I think I’ve done about ten.

Posted by Lena Nelson Dooley at 9:58 AM

Please enter me in your contest for the free copy of The Price of Redemption. Thanks!

Would love a copy of The Price of Redemption. Thanks for the humor in your interview. Looking forwarding to turning the pages in front of my fireplace this winter. K

OOOOH I love suspense, its my fav. genre. Please put my name in the drawing.

I'd love to win this. Please enter me. Thanks! I absolutely loved the first book in the series! :-)

Sounds interesting! Count me in please.

Sounds like a great read! I loved the interview and also the picture. Thanks for showing us your office, Pamela!

Thanks for the comments. Suspense is one of my favorite genres. Hope, you absolutely made my morning when you said you absolutely loved the first book. And, Laura, I must tell the truth. I hate having my picture taken (remember, my favorite food is brownies. It shows). I only like maybe 1 out of 1000 pictures. That's my office at work. My home office is much messier.

great interview! the book sounds so interesting! i'd love to enter to win! hsmuda[at]gmail[dot]com

I'd love to learn more of this story.

Hello, Please enter me in your fun contest! I love to read especially during the winter. Thanks, Cindi
jchoppes@hotmail.com

I am always looking for new books to review on my blog! I love to read.

I love all of Pamela's books. She's a great writer and if you buy her book you know you're getting a great and satisfying read.
She had wonderful character development and is good at upping the pace to keep a reader from putting the book down and/or turning out the light and going to bed.
I'm really looking forward to getting her newest book.
Roz

I think one of the books pictured is "Bride for a Bit" - I have read and enjoyed that one. I would love to win this book and I think I will have to check out the rest of the series as well. About the books - I have way too many and yes, it does complicate moving! :)

I enjoy this blog and this is an author I have to check out. Her newest release looks great, enter me in the contest, please!

I really enjoyed the blog-particularly the Mommy bit. I like the cover on the new book and am enjoying reading the first book. Have always loved mystery and suspense. Hope to see many more from Pamela.

Pamela, David Cassiday, you too?! You're my friend and writing buddy and even I didn't know that! Can't wait to read The Price of Redemption.
Carrie

What a fun and interesting interview.

Please enter me to win a copy of The Price of Redemption.

I just read one Pamela's novellas last night. I didn't know she had any full-length novels out. This sounds good.

Somehow I missed this one until today. I love suspense and thrillers. This looks good. I enjoyed the interview. I feel like I know A little about Pamela after reading it.

This sounds like a great book! :) I'd love to win a copy.

This sounds like one to curl up with! Enter me please

Please enter me to win Price of Redemption. Thank you!

Thanks for sharing yourself with us! Please enter me in the stupendous contest. I appreciate it. This is the kind of reading I really enjoy! Cindi
jchoppes[at]hotmail[dot]com