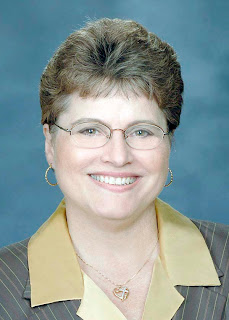 A Cloud of Suspicion is book # 4 in the Without a Trace series. It’s an April release from Steeple Hill Love Inspired Suspense, and it’s my first attempt at a suspense book.

Who came up with the idea for the series?

You know, I’m not sure who had the original idea. The projects are proposed and developed by Steeple Hill editors. I got into the series because I was contacted by Steeple Hill through my agent and asked if I would like to participate. Since I had just finished a book for the Love Inspired continuity Homecoming Heroes, I wasn’t too sure that I wanted to take on another one just yet. However, I’m certainly glad I did.

I know that working on a series that weaves together takes a lot of work. How did your team schedule the work?

I love people who schedule their lives and work. I always wanted to be one of them. Instead, I’m a crisis junkie. Take housework. If I did it every day the house would be clean, and I wouldn’t have to break out the backhoe when my mother calls to say she’s coming over. Nope, that’s not me.

But I digress. Back to the question. All the authors received what’s called “the bible” or outline of the stories and character sketches and then we had a certain amount of time to draft our first three chapters and turn them in. The first thing we did was to set up an e-mail loop, then we read all the story lines and picked apart and repaired any contradictions we found. There were a few. Things like one character’s name had been inadvertently changed from book one to something different in another book. Details are so important in a suspense book. Once we ironed those out, we got underway. This entailed lots of e-mailing each other.

Did you find it hard to work within the series framework?

Yes and no. How easy or difficult a continuity is depends a lot on the authors involved. I was privileged to work with some great women on this series. A Cloud of Suspicion was difficult for several other reasons. First, it was my first suspense novel, and I wasn’t sure I could write suspense, and I really didn’t want to let the other authors down. Second, I didn’t get to reveal the killer. For me, that was worse than cleaning the oven. Did I mention I hate housework? 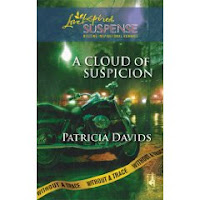 What other books have you had published?

Thank you for asking. I have seven previously published book. They are all from Steeple Hill Love Inspired. His Bundle of Love, Love Thine Enemy, Prodigal Daughter (book 5 of the Davis Landing series), The Color of Courage, Military Daddy, A Matter of the Heart (book 4 in Homecoming Heroes series) and A Military Match.

Besides A Cloud of Suspicion, I have two additional books coming out this year. Speed Trap, another suspense book in September and A Family for Thanksgiving (book 5 in the After the Storm series)

When you aren’t writing or spending time with your family, what is your favorite activity?

Not housework. I like movies. My husband has this enormous DVD collection and we watch a lot of our favorites when we aren’t puttering around in the yard. I love to travel and I get to do a fair amount of that when I’m researching storylines.

Where do you do most of your writing?

I have a home office. I’m chained to my computer most days. I have a new series I’m working on that will feature Amish characters. My writing time is 10 p.m. until 2 a.m. Yes, you read that right. I’m a night owl. It’s easier to ignore dust bunnies in dim light.

I am a Kansas girl, born and raised on the Great Plains. I’m a farmer’s daughter, but I moved to Wichita many years ago. I love the open grasslands, the push of the wind, the ripples of waving wheat fields.

A Cloud of Suspicion features Loomis librarian, Shelby Mason in the role of heroine. Shelby’s friend Leah has been missing for four months and several murders in Loomis remain unsolved. The hero, Patrick Rivers, the town bad boy, has returned after ten years to settle his step-father’s estate. Patrick, once the town’s football hero was accused of rape, but the charges were dismissed for lack of evidence. As soon as he rumbled into town on his custom motorcycle, Shelby begins to receive threats to keep quiet. She isn’t sure about what. As the threats against Shelby escalate, Patrick finds himself drawn to help protect her.

Sounds intriguing. I can hardly wait to read it. How can my readers find you on the Internet?

That’s easy. You can read about me, contact me and enter my contest by clicking over to http://www.patriciadavids.com/

Thank you, Patricia, for spending this time with us.

Readers, for your convenience, I'm including this link where you can order the book:

Leave a comment for a chance to win a free copy. Don't forget to check back a week from Saturday to see if you won.
Posted by Lena Nelson Dooley at 7:12 AM

I would love to be entered into your contest for a free book, May God bless

It was fascinating to read about the process of writing this series. Amazing what goes on behind the scenes.

Sounds like a cool series. I would love to win this book.

Hi all,
I just popped in to see if I could answer any questions. This is a great series and Sheila is right, a lot goes on behind the scenes in putting one together.
Have a blessed day
Pat

Oh, I love Patricia Davids Love Inspired books. It would be neat to read her first suspense.

Thanks for the opportunity to enter.

It was a great interview and I know what it is to go on a cleaning spree when company comes. The story sounds great

Hi Pat,
Your book in the continuity series sounds exciting. And speaking from experience, having the opportunity to work closely and collaborate with fellow authors is great fun. I hope the series does well for all of you who've contributed!

Eileen,
How nice to see you here. Thanks for the compliment about my Love Inspired books.

Jessica,
How neat to see you as well. Another talented Kansas gal and my favorite Medical Romance author.

Maureen,
I'm glad you liked the interview. Red Skelton told this joke many years ago. A little boy listened to the sermon about "ashes to ashes and dust to dust" in church. After the service he reluctantly approached the pastor and said, "You need to come to our house."
The pastor smiled and asked why?
The little boy leaned closer and said, "I don't know if someone is coming or going, but they are definitely under the beds in our house."

I think of that every time I move the furniture to vacume.
Pat

I have read all ( I think) of your Love Inspired books. Your characters are easy to like and get to know. Please enter me into the contest!
God bless,
Mara

I love Love Inspired suspense books. This one sounds good. Love to be in the drawing. Thanks

Pat,
Congratulations on great cover. From reading your previous work I know what's between them will be even better.

Please enter me in the contest for your free book.

Hi Miss Pat, always good information from the woman that loves to teach as well as write. Your book sounds great. I've read everything I own so sign me up. I've got 5 new movie classics just waiting for someone to watch them with. Maybe we can crawl under the couch and share popcorn with Ashes and Dusty!

Please include me in your giveaway.
Thanks
debbie
debdesk9@verizon.net

Thought this was your first suspense book. I always seem to have trouble with suspense because I was the kid who made a point of finding my Christmas presents early! But I am going to try this because you wrote it!

Mara,
Thanks for the kind words about my characters. I think Jennifer in A Military Match has been my favorite heroine, but Patrick, in A Cloud of Suspicion is my favorite hero to date.

Joan,
It's always good to hear from you. I did get an awesome cover this time. For those of you who wonder how much control an author has over the covers, let me tell you it isn't much. We get to make suggestions. But for Cloud, I found the picture of a motorcyle parked on a foggy street and sent it to my editor because I loved it. The art department came up with a much cooler image that fits perfectly with the feel of this series.

Becky,
Thanks for stopping in. Yes, I do like to teach. Now, if I just knew what I was talking about.

Julie,
This is my first suspense book. The other books in the series have been written by Margaret Daley, Robin Caroll and Shirlee McCoy.
After my story is finished, Roxanne Rustand picks up the thread and Terri Reed finishes it all up.
Thank you for saying you'll read it because it's mine. I'll warn you, the murderer isn't caught until the last book.
Pat

I love reading suspense/thriller books. I would love to include this in my collection. :)

thanks for sharing this giveaway. :)

Thanks for the wonderful interview, Lena,..... Pat your website is great and all of your books look so good.... thanks for the opportunity to be included in this drawing...

Thanks for the chance.

I would love a chance to win A Cloud of Suspicion. I am always amazed by a series developed by several authors.
worthy2bpraised{at}gmail{dot}com

Fabolous interview! I love your sense of humor. I hate housework too, and fortunately all my husband is real picky about is clean socks and clean dishes. He also likes me to vacuum by the dog's food bowl once every couple of days, LOL!

I've been reading his series because the first three in the series are my friends and Shirlee was a mentor. You all have done a great job. I can't wait t read your installment. I have someone very dear to me named Shelby. :)

Thanks to both of you.

Pammer,
I have a friend with a daughter named Shelby. She was excited to see my heroine's name, too.

In Military Daddy, I named a teenage character Olivia because a co-worked had just had a daughter named Olivia. I had given my friend a little grief about such an old-fashioned name so I thought I'd make it up to her. She was delighted.

You VACUUME by the dog food bowl? Honey, my dog is the vacuume. Anything that hits the floor she eats. Paper, paperclips, business cards, my slippers if I'm not wearing them. We should have named her Hoover instead of Sadie.

Best to all.
Pat

Please enter me in the contest. This sounds like a great read! Blessings. Holly

I sooooooo love Love Inspired Books, my mom and I trade them all the time. Please enter me in teh contest.

Sounds like a very good suspense novel. Thank you for offering these awesome giveaways. I so appreciate it.