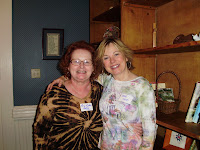 In February, I was blessed to spend almost a week at a writer's retreat at the Round Top Retreat Center in Texas with many of my favorite authors, including Deeanne Gist. While we were there, she gave a presentation about the collaboration on this book. I knew I had to feature her and Mark on this blog.

How did the two of you decide to write a book together? Dee: I wanted to collaborate on a romantic suspense with Mark, but I knew if I called it that, he’d say no. He, at the time, considered himself way too high-brow to write a romance. So I lied. I asked him to collaborate on a novel with me and told him it would be a crime fiction. Never mentioned the romance part.

Mark: Eventually I did figure out what was going on. But by then, like the frog in the boiling water, it was too late! A lot of writers dream about collaborating. Only a few get the opportunity. In television and film, it’s not uncommon, but novelists typically fly solo. I love a challenge, and since Dee and I were already great friends and knew each other’s work inside and out, writing Beguiled together seemed like the perfect thing to do.

What is the hardest thing about writing as a team?

Dee: I wanted our hero to look like this:

And Mark wanted our hero to look like this: 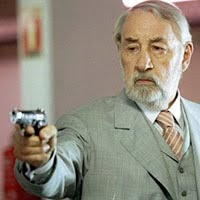 Mark: Guess who won that argument? By the way, the older gent holding the Beretta is the late Philippe Noiret, probably best known to American audiences for playing Pablo Neruda in the film Il Postino. He did inspire another character in the book. I won’t say who, but here’s a hint for those who’ve read Beguiled: 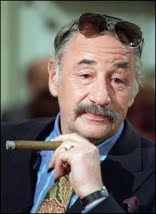 How did you choose your characters’ names?
Dee: I chose them. And Mark made fun of them. In the book. No lie. He has the hero thinking, and I quote:
“Rylee?” Logan smirked. “Seriously, she’s got to hate her parents.”

Mark: Guilty as charged. Not only would she hate her parents, but she’d spend half her waking life correcting misspellings. My wife’s name is Laurie, which most people seem to think is spelled Lori. If I wrote historical novels, I’d be tempted to change the spelling of my name to Marque—as in, letters of. 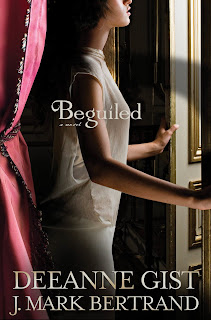 Would you want to work on another book together?

Dee: If I was ever to do another collaboration, I can’t think of anyone I’d rather do it with than Mark. But I found that I simply cannot write two books in one year. So, in order to keep my work schedule manageable, I’m going to have to go back to my one-book-a-year historicals.

Mark: Absolutely. Of course, to wrench a passage from the Bible way out of context, the spirit is willing but the flesh is weak. The challenge is finding the time, and as Dee says, writing two books in the space of a year is quite a feat. In theory, having two authors should split the work in half. In reality, it probably doubles it. After all, there are so many extra arguments over what the hero is going to look like!

What do you want to tell us about the book?

Dee: Rylee Monroe, a dogwalker in Charleston's wealthiest neighborhood, never feared the streets at night. But now a thief is terrorizing the area and worse, someone seems to be targeting her.


Reporter Logan Woods is covering the break-ins with the hope of publishing them as a true-crime book. The more he digs, the more he realizes this beguiling dogwalker seems to be at the center of everything.


As danger draws ever closer, Logan must choose: Chase the girl, the story, or plunge into the shadows after the villain who threatens everything?

Mark: Beguiled isn’t a Deeanne Gist book set in modern Charleston. And it’s not a J. Mark Bertrand book with an added romance plot. It’s an ideal collaboration in that, working together, we came up with a book neither of us could have written on our own. There’s suspense, romance, mystery, and a sense of humor.

Where can our readers find you on the Internet?

Mark: The best place to find info about my writing is jmarkbertrand.com. And readers who want to know about about my upcoming crime fiction release, Back on Murder, should check out the dedicated site BackonMurder.com and read the excerpt!

Thank you, Dee and Mark. I believe this is the most fun interview I've ever done, and I can't wait to read Beguiled.

Readers, here's a link to the book. By using this link when you order, you'll help support this blog.

http://lenanelsondooley.blogspot.com/
Posted by Lena Nelson Dooley at 7:01 AM

Hey, am I first?? What a FUN interview! Sounds like a great book and one I would enjoy reading. Thanks for the chance! :)

Oh, I've been looking forward to reading this book. I love mysteries, Charleston, and have enjoyed reading Deeanne Gist's other books.

Hi!
I loved reading how the collaboration occurred. What a hoot!
I also enjoyed reading how the different parts of the story meshed. It is this combination that makes me want to read it. Of course, I'm a sucker for romances, mysteries, suspense, and humour, so this is obviously a good fit. I'll add it to my TBR list, but would love to win it obviously!
Have a great day!

This book is on my wish list.
I have read the review and would really, really like to win it.

I love mysteries and romance put together into a story. They are the best of books. I would love to win Beguiled, I love the name.
Thanks for the opportunity to enter.

The book sounds great! Thanks for entering me!

Please enter me in the contest!

Love hearing your comments, girls. It really was a lot of fun to work with Mark and the fun keeps on coming. We received an email from a fan who noticed that the hero's eyes are brown at the beginning, but blue at the end (I can't believe I did that).

This was Mark's reply to the fan: "Logan's eye color changed when he fell in love." LOL!!

I had a great time doing the book -- and doing the interview, too! Thanks, everybody, for stopping by. I hope you'll enjoy Beguiled!

I love Deeanne Gist...Please enter me! I would love to have a chance to read this book...and I'm glad she won, when it came to who the hero looked like!!! :)

I love the 2 pictures of the hero. How funny! Great interview, Lena!

This ought to be interesting. Thank you for the opportunity to win.

I actually bought the book for a friend, but was interested in reading it after browsing through the first chapter. It's interesting to hear about the collaboration of working on a book together. How does the writing process work though--taking turns and then reading through and making suggestions? Just curious.

Please enter me in the book drawing.

This sounds good. Hope I win.

Great interview! I really like the part about the names :)
The book sounds very interesting.

This book sounds like a great mix of suspense, romance, and humor. The way the authors interact even in interviews I get the feeling they mesh well together as a writing team. Please enter me.

Sounds like a suspenseful read! I'd love to win!

a fabulous interview/posting...please include me in this giveaway.

I've heard about this book before and think it sounds interesting. Please enter me.

Wow! You two are a bundle of laughs--I'm sure that helps the collaboration process. The book sounds like one I'd enjoy.

This has got to be the funniest interview I've ever read! What a sense of humor. Thank you. Please enter me for the book. I love mysteries.
desertrose5173 at gmail dot com

Looking forward to reading another book by Deeanne!

I think this would be a good book. Thanks

Interesting how they worked together to write this book. Great interview. Please enter me.

What a fascinating interview!

This was a great interview--how fun! I really enjoyed the banter between them. :) Please enter me for a chance to win! Thank you!

I saw this book in the CBD catalog and was interested in reading it. Now, after reading the interview, I am even more interested.
Please enter my name into the drawing. ~Tammi

sounds like a good book and that was a great interview

I've been following this author around. i'd really love to have the chance to read the book !

Don't enter me - I read "Beguiled" a few weeks ago and just wanted to say that I loved it. I'm a southener, so I loved the feel of Charleston. The mystery and romance elements were also very good. I hope to see more books by this duo.

Sounds like a book I would enjoy. Please enter me in the drawing.

I've have read this book and really enjoyed it...Please don't enter me, I just wanted you to know that we posted about this giveaway at Winning Readings.

Please enter my name in the giveaway for the books. Thanks!

I would really love to win this book! Please enter me and thank you for the opportunity.

I loved the pictures of who they wanted to play the main characters, that was quite funny. I would love to read the book.
debp
twoofakind12@yahoo.com

I would love to read this book. Please count me in.

Please enter me in this giveaway. Thanks!