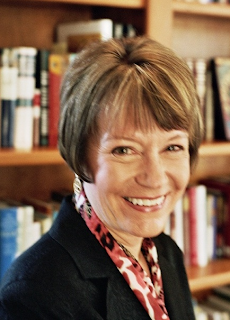 Welcome, Christine. Tell us how much of yourself you write into your characters.
I write a good deal of myself into my characters.  Every character has some of me or my life in them.  I draw on my own experience, at times dramatize and exaggerate it, but there is usually a kernel from my life.  My time spent in , , and as well as has been a major resource, and the characters reflect not only me but folks I have known, their desires and their fears.
What is the quirkiest thing you have ever done?
I'm not very quirky, but I've had some experiences that were unexpected and remarkable.  Once while hiking in a Hawaiian rain forest, I tripped on a rock, flew through the air, arms outstretched, and softly landed in high grass where an angry guinea hen, defending a nearby nest, batted her wings and glared at me with menacing beady eyes. (an experience I used in Hana-lani)
When did you first discover that you were a writer?
Quite late in life.  In our European travels I kept detailed journals, and with descriptions of people I met along the way as well as settings.  Then I thought it would be fun to add a plot.  One thing led to another, and quite late in life – my fifties – I found I had written a novel which I called Pilgrimage, set in .  OakTara offered me my first contract in 2007, and they followed this with the publication of Offerings, set in , Inheritance, set in (a trilogy), and Hana-lani, set in (a stand-alone).
Tell us the range of the kinds of books you enjoy reading.
I love history and good fiction.  Not being a scholar, I prefer my history to be "popular" with attention to irony and interesting moments that created the culture in which we live today (Paul Johnson, Barbara Tuchman, Gertrude Himmelfarb).  I prefer fiction with attention to metaphor, but with compelling thought-provoking themes and a good story.  (Children of Men by P.D. James; The Memory Keeper's Daughter by Kim Edwards; Father Elijah by Michael D. O'Brien; War in Heaven by Charles Williams; Never Let Me Go by Kazuo Ishiguro; The Death of a Pope by Piers Paul Read, Father Elijah by Michael D. O'Brien).
How do you keep your sanity in our run, run, run world?
Good question!  I limit television and my to-do list and try not to over-extend.  I begin and end my days with prayer – morning and evening (ten minutes) and pause to give thanks at meals and during the day.  I exercise regularly and try and remember to breathe.  I worship God weekly in my local parish church.  I try to do my best and leave the rest up to God.
How do you choose your characters’ names?
At first I used family names and still do when I can, personalizing the writing experience.  I make lists and Google them to see what associations might crop up in the reader's mind, associations I might not have thought of.  The names need to be dissimilar in a particular book and somehow sound like the character as well as reflect the ethnic background.  They may be names that have a payoff in the end.  In my work-in-progress one of the main characters has a middle name that later becomes meaningful.  It's surprisingly difficult to meet all these criteria so I usually change them a few times during the writing process.

What is the accomplishment that you are most proud of?
Giving birth to my son, raising him (for a time as a single parent), and seeing him now as a responsible, loving father and husband who has a strong faith in God, with a lovely wife and two adorable children.
If you were an animal, which one would you be, and why?
A cat.  They seem so contented, clever, and sociable.  I love cats and we have two remarkable ones who are making a cameo appearance in my novel-in-progress.
What is your favorite food?
Salmon lightly cooked.  But I also love apples with soy nut butter, and green salads with tomatoes.
What is the problem with writing that was your greatest roadblock, and how did you overcome it?
Making my sentences too long for the modern reader, and sometimes creating phrase lists that go on and on so that the reader gets bored and confused and generally wants to toss my book far far far away, in a dark dreary place where there is no light, or so a local editor once warned me, and another said the practice came from reading the Psalms which I find fascinating.  I try and watch out for the tendency.  Varying my sentences helps.   I'm not sure I can say I've overcome it.
Tell us about the featured book.
Hana-lani is the story of old Nani-lei who lives in Hana-lani, her family home in rural .  She looks after her grandson Henry, 52, and his daughter Lucy, 6, who have returned to Maui from after the death of Maria, Henry's wife.  Henry and Maria, both professors, had been working on A History of Ethics, and now the grieving Henry struggles to finish it.
The story also follows the life of city girl Meredith Campbell, 36, fast-paced, self-centered, and beautiful, who believes her body will ensure her happiness.  After losing her job and finding her lover unfaithful, she flies to , sure he will follow…but her plane crashes near Hana-lani.
As their worlds collide in a natural world both beautiful and dangerous, Henry is forced to act on his words, and Meredith comes face-to-face with her own life choices.
Hana-lani considers the “permanent questions” T.S. Eliot asks – what is goodness, truth, and love?
Please give us the first page of the book.
an Francisco magazine said she was one of the most eligible women in town, and Meredith Campbell agreed. It was nice to be appreciated since moving from , nice to be admired in the party circuit. She had arrived at the City by the Bay in early 2002, so it had taken her only two years to get her name in print.
The workout room was packed with slim bodies, pushing and pulling, engaging steel levers and weights, grinding rubber soles onto moving belts. Above the whirring of the machines and the beeping digital read-outs, a rock band wailed as the February rain fell silently outside the double-paned windows of the tenth-floor club.
She flipped her cell shut, thought better of it, flipped it open, and tapped another number. She had finished twenty minutes on the Stairmaster and read her results: 178 calories. Not bad. Unlike some women who let themselves go, she worked hard, two hours daily, to meet her standards, but it seemed she could never quite meet them; she could never be quite like those models in the magazines. Still, her legs were long with muscular calves, her thighs toned, her tummy almost flat, her hips just wide enough to be alluring, her waist sweet and narrow. Her breasts tilted up nicely, impressive in her stretch camisole. She couldn’t complain about her facial features, either, with the high cheekbones, wide-set blue eyes, star smile, and thick blond hair falling to her shoulders. She had come to expect men to melt at first glance.
Holding the phone to her ear, Meredith waited, counting the rings, not wanting to leave a message.
“Pick up, Parker, pick up.” She wiped her brow and climbed off the Stairmaster.
“Parker Kirby, Accounts,” Parker said in her clipped voice, sounding rushed as usual.
“They fired me,” Meredith hissed as she slipped her magazine, folded back on “How to Find Love,” into her Gucci tote alongside the Chronicle’s horoscope page. The astrologer had predicted today would not be good.
How can readers find you on the Internet?
www.ChristineSunderland.com
http://mytravels.ChristineSunderland.com
Twitter: Chrisunderland
Facebook: Christine Thomas Sunderland
Publisher: www.OakTara.com
Contributor to the Christian Post: http://blogs.christianpost.com/bindings/

Thank you for spending this time with us, Christine.

If you’re reading this on Feedblitz, Facebook, or Amazon, please come to the blog to leave your comment if you want to be included in the drawing. Here’s a link.
Http://lenanelsondooley.blogspot.com
Posted by Lena Nelson Dooley at 2:21 AM

I really enjoyed the interview with Christine. Raising a child as a single Mother couldn't have been easy. She praised him for the Father he is today. That says a lot! Her book "Hana-Lani sounds like a great read and I'd love to win it. Christine is a new author to me.

Blessings,
Judy from IN

What a beautiful cover. It looks like a great read and one that I would love to read. Please enter me.

Hello! I find it very interesting that you Google names to try and discover associations. Very clever! I'm from Ohio. kristiedonelson(at)gmail(dot)com Thank you.

a great posting...thanks for the chance to read this wonderful novel :)

Thank you so much for the chance to win this. This book sounds great. I would love to read this. Thanks again.

Please include me in the book giveaway thanks

I live in ND

Looks like a really great read! Thanks for the chance to win!
Kari in ORegon

Thanks for all your lovely comments! Hana-lani was a joy to write and I hope you enjoy it too. It's now won three awards and I'm hoping for a fourth! Best to you all,
Christine

Hawaii is one of my favorite places - pretty cover

Cehryl in IL
msboatgal at aol.com

Great interview. This book sound wonderful.Please enter me in the giveaway.Thank you for the chance to win this.PA.

Thanks so much. Yes, Hawaii is lovely, but also dangerous... and this contradiction was one of the reasons I chose the setting. Those volcanoes, hurricanes, and tidal waves make for a curious contrast to sea breezes, warm temps, waving palm branches, sweet dancing. A fascinating place...

I love reading books set in Hawaii. It's on my bucket list to visit there.

I have been to Hawaii (3 times and it is absolutely beautiful......would love to read this book.....