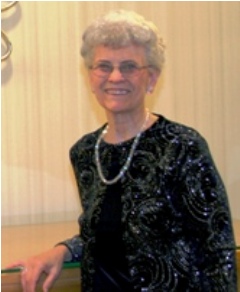 Welcome back, Martha. As an author, I know it takes a lot of people to birth each book. Who were the people involved in the birthing of this book, and what were their contributions?
This book came about as the fourth in a series that I proposed to Debbie Marrie, acquisitions editor at Charisma Media. After I had the story written it went to another editor, Lori Vanden Bosch. She had some ideas for the story and together we worked on it to bring the story to its final form. Deborah Moss read it then and had a few questions that helped clarify a few points. Atalie Anderson sent me the cover and with a few minor changes, we had the beautiful cover that you will see today. Usually I have a critique partner or two read over the manuscript, but there was no time for that with this book. Getting a book from the story idea to final publication involves so many people, and so far my experiences have been very good.

If you teach or speak. What’s coming up on your calendar?
I recently spoke at the Tulsa ACFW group and I will be teaching two workshops at the Texas Christian Writers Conference in on August 4. After that I will be speaking to a women’s group at First Baptist Church of Houston in October.

If you had to completely start over in another place, where would you move, and why?
If you mean at birth, I wouldn’t really want to be another place. I loved , where I grew up and graduated from high school. If you mean starting over later in life, I would have enjoyed living in the country on a ranch somewhere in Texas.

If you could only tell aspiring novelists one thing, what would it be?
All aspiring writers must have patience and learn to wait. We wait on responses from editors and/or agents. We wait on return of critiques. Most importantly of all, we wait for God’s perfect timing. He is always on schedule, and most of the time it doesn’t fit ours.

You’ve been asked to be in charge of a celebrity cruise. Who would you ask to take part, and why? (AS in what program, singers, etc. [it doesn’t have to be writing related])
This is a toughie as I don’t know any of the celebrities from today because I just don’t pay that much attention to them, and we don’t go to movies. However, if I could plan a Christian cruise, I would invite Point of Grace and Steve Green to provide music, and Christian comedian Mark Lowry to entertain us with his wonderful stories. 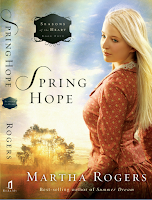 I’d love to be on that cruise with you. Tell us about the featured book.
Spring Hope is a story of forgiveness that parallels my own with my brother. Learning to forgive someone of a lifestyle or crimes that go against everything one has ever believed and taught is one of the most difficult things to do for a Christian, especially when that person is someone close to us. Cody Muldoon must learn that lesson and my agony became his as he wrestled with God about what he had to do.

Please give us the first page of the book.
February, 1891
Chapter 1
The coldest night of winter thus far chilled Deputy Sheriff Cory Muldoon to the bone as he made his rounds in the alleyways of Porterfield. Cold wind howled around the corners of the buildings now closed up for the night. Most everyone in Porterfield had gone home to their families and warm homes. This was all the winter he cared to experience, and even this would be only a few days as the weather in could change in a heartbeat, summer or winter.

Lights and music from the saloon rang out and mocked the dark silence of its neighboring buildings. Friday nights found cowboys and lumberjacks both squandering their hard-earned money on liquor and women. Tonight would be no different despite the cold, near freezing temperatures. Most likely at least one or two of them would end up in the jail for a spell.

Cory turned up the collar of his sheepskin-lined jacket and shoved his hat farther down on his head. When he rounded the corner of the livery, the gentle nickering and snorts of the horses boarded there broke the quietness of the night.

A cat skittered out from behind the general store, and a dog barked in the distance. Ever since the bank robbery last fall, he or the sheriff had roamed the alleys behind the main businesses every night to make sure everything remained locked tight and secure. So far, he’d seen only a typical Friday night with everything as routine as Aunt Mae’s boardinghouse meal schedule. Of course being Friday the thirteenth, anything could happen.
They already had two men put up for the night back at the jail. Sheriff Rutherford took the night duty to keep the jail cells warm so Cory could have Saturday off for his Aunt Mae’s wedding. Ole Cooter probably got drunk and disorderly just so he’d have a warm place to sleep tonight and not have to go out to his shack. Cory held no blame on the man for that. Durand, the saloon owner, caught the other man cheating at cards and had him arrested. Maybe the card shark would move his game on to some other town.

Where can we find you on the Internet?
www.marthawrogers.com

Thank you, Martha, for another interesting interview.


Readers, here’s a link to the book. By using it when you order, you help support this blog.
Spring Hope (Seasons of the Heart)

Martha Rogers is one great author! I would love to win a copy of "Spring Hope". This book sounds so good. I just love the cover of this book. It is so eye catching!

Enjoyed the interview with Martha. Thanks Lena and Martha for this post and giveaway.

Haven't read anything by Martha, would love to read this one!

I haven't read anything by Martha yet and would love to. Please enter me.

Thank you, Lena and Martha for a great interview and the opportunity to win a awesome sounding novel. i really enjoyed this post. Thanks again.

WOULD LOVE TO WIN. ANGELA FROM KY

Thanks for another great interview! Would love to add this book to my collection.

Sounds like a book I'd really enjoy
cheryl in IL
msboatgal at aol.com

I'd love to read this!

thanks for the chance to read this wonderful story ;)

Thanks for dropping in everyone. I wish all of you could win.

This book looks so interesting!!! Please enter me!
Thanks and God Bless!
Abigail
Blanch, N.C.

Would love to read this book...sounds great.Thanks Jackie Tessnair from N.C.

Would love to win a copy. Please enter me in the drawing. Portsmouth, VA