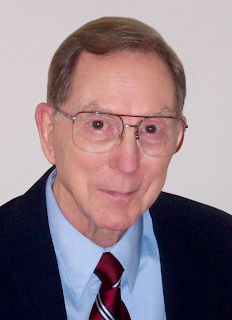 Welcome back, Donn. I'm glad to see you have another paramilitary suspense novel. What are some of the spiritual themes you like to write about?
They’re fairly basic. Chief among them is the reality of evil and the subtlety of it: things good in themselves become evil when pursued to excess or in the wrong way. A subtheme is the inadequacy of any religion except Christianity to provide an explanation of evil. Consequently, anyone who thinks deeply about evil will be driven to Christianity. Another theme is the emptiness and incompleteness of a life without God. And yet another theme is forgiveness.

What other books of yours are coming out soon?
To be honest, I wish I knew. I do have two that are being shopped around. One is a sequel to my mystery Rhapsody in Red. Another is a historical that’s quite different from my other books. And of course there are two others in various stages of completion.

If you could spend an evening with one contemporary person (not a family member of yours), who would it be and why?
I’m very tempted to say Newt Gingrich. I don’t think I’d ever vote for him, but he is probably the best mind on the political scene today. His blend of historical knowledge, Catholic faith, and politics would make lively and interesting evening conversation. But my real choice would have to be Billy Graham. I have no doubt that an evening with him would deepen my faith and spiritual understanding, and that kind of evening would be the worthier goal.

What historical person would you like to meet (besides Jesus) and why?
I'd choose the medieval poet Dante Alighieri. His Divine Comedy is one of my all-time favorites, and I'd like a first-hand reading of what he intended in his allegory, e.g., does the Greyhound represent Dante's patron or does it represent Jesus in the Second coming? I'd also like to know more about medieval than the history books tell. My second choice would be the British naval hero Horatio Hornblower. I’d like to ask him how he rescued that group of European slaves from their African masters without firing a shot or paying a shilling. His biography is silent on that.

How can you encourage authors who have been receiving only rejections from publishers?
That’s always difficult because you don’t know the basis of the rejections. Let’s assume that flaws in the writing caused the rejections.  I think the best way is to emphasize things that the writer is doing really well. After the praise sinks in, you can make suggestions on how to tighten up the writing to achieve a more favorable reception.

The book is a suspense novel titled Deadly Additive. To soldier-of-fortune Jeb Sledge it seems like a simple job: Rescue an heiress and her journalist friend Kristin Halvorsen from their kidnapping by Colombian guerrillas and collect a sizable paycheck. But Kristin has other plans.

After stumbling onto a mass of dead bodies, she won’t leave without the proof she needs for the story of a lifetime. While she and Jeb wrangle over her obstinacy, they discover a hidden factory where the guerrillas build a new and deadly type chemical weapon for the international black market.

Their discovery triggers a raid on the factory, followed by a desperate search through the Caribbean and the to prevent a catastrophic attack by weapons the factory has already produced. But who is behind that attack, and what are the planned targets? Finding out brings Jeb and Kristin again into peril for their lives. Unexpectedly, their experience also leads them into a spiritual odyssey. As always in my novels, the suspense is often laced with moments of humor.

Please give us the first page of the book.
By habit, Jeb Sledge disapproved of people who pointed weapons at him. The present offender’s tuxedo did not qualify him for an exception, and the silencer on his pistol only aggravated the offense.

They stood in the living room of Sledge’s drab one-bedroom apartment in north . That morning his doctor had pronounced him fully recovered from last year’s wounds by an assassin. In the afternoon he’d refused an offer of two hundred thousand dollars to rescue the daughter of billionaire Steve Spinner from her Colombian kidnappers.

Later that day he got a call from Roger Brinkman, the retired CIA officer who now ran an “information service” known among experts as the best source for data on international crime. Brinkman didn’t say how he'd heard about Spinner’s offer, but he chided Sledge for turning it down. He’d heard vague rumblings of something new among the Colombian guerrillas, and the Spinner problem might make a good takeoff point for the right operative.

Sledge said he’d think about it.

He did—for thirty seconds over dinner at a good Italian restaurant with reasonable prices and servers who didn’t introduce themselves. The dinner celebrated his advent as the “New Sledge.” The old one was a hard case with a bad habit—volunteering for dangerous jobs to support noble causes. The cantankerous Old Sledge also enjoyed throwing his weight around, all two hundred and fifty pounds of it. But that Sledge had not survived the assassin’s bullets. The new one sprung from his ashes would be too smart to take risks where there was no tangible reward. He would live the quiet life and avoid noble causes.

Savoring the thought, Sledge drank a toast to his new self.

Afterwards, when he opened his apartment door, the security system gave no warning beep. Had he forgotten to set it?

Then the intruder switched on the lights, and the New Sledge found himself looking into the silencer on a Walther PPK. He was caught. Too far in to dodge back outside and too far from his captor to attempt disarming him. Besides, the man weighed at least as much as Sledge and looked like he’d be hard to handle even without a gun. The ugly curl of his lip said he was itching for an excuse to pull the trigger.
Sledge’s anger blazed, but he raised his hands and controlled his voice. “You're welcome to my fortune—thirty-three dollars and sixty-two cents. You’ll find the silverware in the kitchen drawer, but it's actually stainless.”

Thank you, Donn, for another interesting interview.

Readers, here are links to the book. By using one when you order, you help support this blog.
Deadly Additive

Posted by Lena Nelson Dooley at 6:44 AM

Thanks Donn and Lena for another intriguing interview and fabulous giveaway. This sounds like a novel i would love to win. (i'm actually only adventurous through the books i read...otherwise i have a hard time taking the road less traveled...literally)

The opening line in the excerpt wholly captured my attention. Well done, Don. And thank you for the giveaway. I'd love a chance to win this book.

I'm from the state of Texas.

Intriguing answers, Donn. Thanks for sharing.

Thank you Marianne, Gillian, and Davalyn for your kind comments. I wish all three of you could win the free book.

Breanna said...
This comment has been removed by the author.
9:23 AM

Thank you, Breanna. Hope you enjoy it.

I, too, love a good suspense novel, and today's looks fantastic. Can't wait to get my hands on it!

And thank you, Eldra. Hope you enjoy it.

What a thrilling story. I look forward to a great read.

Looka like an interesting reading. Praying about the publication of your other works. Blessings, Susan New Mexico

Thanks for the opportunity to get this book.

We have quite a few men readers in the church library. The book, "Deadly Additive" by Donn Taylor would be a wonderful addition to the library.
Janet E.
Florida
von1janet(at)gmail(dot)com

I enjoyed this interview. Thanks for the chance to win this suspense novel.
Beth from IA

Interesting book, Donn. I have one of your earlier books on my Christmas list. Hope I get it!
Wes
campruston@gmail.com
Louisiana

This sounds like an awesome book!! I'd love to read it!!

Hi Don,
Thank you for giving me a chance to win "Deadly Additive" I love suspense story and this story about this guy had to go in and two people who had been kidnapped and bring back safe. Which there was dead bodies. Can't wait to find out how the rest of the story goes. God bless you and Merry Christmas.
Norma Stanforth from Ohio

Thanks to Mary, Susan, Lyndie, Janet, Beth, Wes, Leauphaun, Sharon, Nathaniel and Norma for your interest. I hope all of you enjoy the book.

I do like mystery and intrigue and altho I haven't read Don's work, I would love to. Please enter me in the drawing. Blessings, Darlene MO
spangldlady[at]gmail[dot]com

Enter me I would love to win this book!

This sounds like such an exciting book! I'm in MN.

I love reading and spend a lot of time at it when I can. I have found I really just want to read Christian authors because others tend to either use language I don't want to read or other things I am not comfortable with. I love intriguing stories with plots that twist and turn.