MEMORY'S DOOR - James L Rubart - One Free Book on This Blog, Plus More 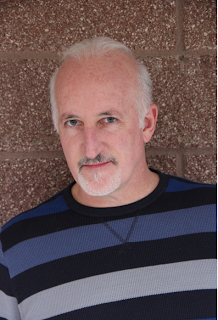 Bio: James L. Rubart is the best-selling and Christy award winning author of, ROOMS, BOOK OF DAYS, THE CHAIR, SOUL’S GATE, and MEMORY’S DOOR. During the day he runs Barefoot Marketing which helps businesses and authors make more coin of the realm. In his free time he dirt bikes, hikes, golfs, takes photos, and occasionally does sleight of hand. No, he doesn’t sleep much. He lives with his amazing wife and teenage sons in the and still thinks he’s young enough to water ski like a madman.

Tell us about your salvation experience.
It’s summer after seventh grade. I’m at a Christian basketball camp and after one of the nightly talks I’m lying in bed and it strikes my little eleven years old heart that I want what the speaker talked about. I tell Jesus I’m going to follow him the rest of my life. Good choice. He is Life and restoration and freedom.

You’re planning a writing retreat where you can only have four other authors. Who would they be and why?
Only four? Wow. Tough. First on the list without question would be C.S. Lewis (did you say they had to be alive?) Lewis has been my biggest influence as a writer. Here’s a guy who wrote fiction, non-fiction, and excelled at all of those forms. Not to mention he’s one of the most brilliant minds of the 20th century.

I’d probably send an invite to Ted Dekker. Reading his early books gave me hope my kind of stories could find an audience, and in one of those fun perks of being an author, Ted and I have become friends. His brain works somewhat similar to mine so the rapid fire ideas we’d develop would be tremendous fun to brainstorm on.

Next would be Stephen Lawhead. When I first discovered Lawhead in the mid 80s I was blown away. Wildly entertaining stories with deep spiritual significance even though his stories weren’t overtly Christian. My deep, deep, dream (so deep I never told anyone but my wife) was to someday do what he was doing. Stephen has become a friend as well, and because he’s so different from me, I know he’d make the retreat a extremely memorable experience.

For the fourth member of my retreat I’m going to bend the rules slightly and invite Allen Arnold, the former Sr. Vice President and Publisher at Thomas Nelson Fiction who signed me there. He’s become one of my closest friends and helped me brainstorm Soul’s Gate, Memory’s Door, and The Spirit Bridge (the third book in the Well Spring series out next spring). He loves story and is brilliant at shaping novels from both a macro and micro level. So I’m going to call him an honorary author.

Wow, that would be a weekend to remember. Hang on, be right back, I need to make a few phone calls.

Do you have a speaking ministry? If so, tell us about that.
I do. I love speaking almost as much as writing. I’m mediocre at best in many things, but speaking and writing come naturally to me and they both make me come alive. I love seeing people set free. Love seeing light bulbs explode above their heads with hope and the belief they can step into the destiny and purpose God has planned for them. I love seeing people realize they have great worth and that they are truly loved. I’ve keynoted, done workshops, lead men’s retreats, and spoken to MOPS groups.

What is the most embarrassing thing that has happened to you and how did you handle it? In the mid 80s, I worked at a radio station in the area. I was the punk-kid reporter sent to cover a Navy station that was being built a bit north of . The Secretary of the Navy was there. Booth Gardner, then governor of was there. Every TV station and radio station in the area was there. I got lost and arrived after Booth had begun to speak. So I carefully and quietly set my mic up on the podium Booth stood behind. But I didn’t do such a great job of setting it down. It slid off the podium and went BOOM!

Governor Gardner stopped speaking, looked down at me and said, “So where are you working tomorrow?” The entire room erupted in laughter which went on for thirty seconds. I’m not imagining it went on for that long. I had my recorder, remember. So I have the whole thing on tape. Not my finest moment, but in retrospect, it was pretty funny. A quick side note to that story: Years later I accompanied my wife and her 6th grade class to on a field trip. As we were crossing the capital, Booth Gardner of all people was coming straight toward us. He chatted with Darci’s class for a few seconds and then we asked him if he remembered the young reporter who interrupted his talk years earlier. He laughed and said, “Of course, that’s one I’ll never forget.”

People are always telling me that they’d like to write a book someday. I’m sure they do to you, too. What would you tell someone who came up to you and said that?
Buy a good pair of running shoes. Put them on. Sprint in the opposite direction as fast as you can. Then I’d get serious and tell them the story of the woman who came up to one of the world’s most famous violinists after a concert and praised him lavishly. She ended her comments by saying, “You’re so wonderful. I’d give my life to be able to play like you.” He responded by saying, “I did.”

Most people who want to write a book don’t want to pay the price. But if I sense they’re willing, I tell them to start reading excellent writing blogs like Rachelle Gardner’s, to go to writing conferences, to buy books on the craft and study them with the same intensity as if they were training to become a brain surgeon. That’s the kind of focus and dedication it takes.

Tell us about the featured book.
Memory’s Door is the second novel in my Well Spring series and as well-received as Soul’s Gate was (Christy Award winner in June), I think people will like Memory’s Door even more.

The stakes are higher, the lows are lower and the battles are bigger. There were a number of scenes that brought dust to my eyes as I wrote them, and that’s always a good sign that I’ve captured a few elements that will go to the deep parts of people’s hearts.

This is a deeply personal story that came out of time of spiritual and personal crisis and having to face my own regrets. Writing the novel was incredibly freeing (from my regrets) and in some ways is an expression of my journals and the struggles I went through while writing it, coming out in published form.

Here’s the back cover copy:

The prophecy brought them together. But the Wolf has risen, and now their greatest battle begins.

The four members of Warriors Riding have learned to wage war in the supernatural, to send their spirits inside people’s souls, to battle demonic forces, and to bring deep healing to those around them.

But their leader Reece is struggling with the loss of his sight. is being stalked at his concerts by a man in the shadows. Dana’s career is threatening to bury her. And Marcus questions his sanity as he seems to be slipping in and out of alternate realities.

And now the second part of the prophecy has come true. The Wolf is hunting them and has set his trap. He circles, feeding on his supernatural hate of all they stand for. And he won’t stop until he brings utter destruction to their bodies ... and their souls.

I read the book as soon as I received it. I love your books. They take me to spiritual places that make me grow in my knowledge of the spiritual world and our awesome God’s place in it. Tell my readers how can readers find you on the Internet?
Facebook: https://www.facebook.com/JamesLRubart
Twitter: @jameslrubart
Website: http://jameslrubart.com/

Thanks much for having me!

Thank you, James, for allowing me to introduce my readers to you and your marvelous books.

One winner will receive:
Enter today by clicking one of the icons below. But hurry, the giveaway ends on September 7th. All winners will be announced September 9th at James' blog.

Don't miss a moment of the fun; enter today and be sure to visit James' blog on the 9th to see if you won! (Or better yet, subscribe to his blog (enter your email in the blog sidebar) and have the winner announcement delivered to your inbox!)

Readers, here are links to the book. By using one when you order, you help support this blog.
Memory's Door (A Well Spring Novel)

If you’re reading this on Google +, Feedblitz, Facebook, Linkedin, or Amazon, please come to the blog to leave your comment if you want to be included in the drawing. Here’s a link.
Http://lenanelsondooley.blogspot.com
Posted by Lena Nelson Dooley at 6:42 AM

We have his books in our church library.
I've entered the contest too.
Thanks for the giveaway.
Janet E.
von1janet(at)gmail(dot)com
Florida

I have heard wonderful things about James Rubart's writing and look forward to reading his books! Thank you for sharing this interview and giveaway.

Interesting anecdote with the violinist. To be creative, & good at it, takes dedication+++

I have seen this book around and it looks interesting.
Rebekah TN

Melanie Backus said...
This comment has been removed by the author.
5:43 AM

This book sounds so interesting and I would love to read it. Thank you for the interview and the giveaway.

Good interview! His books have been highly recommended to me and are on my TBR list. I'm also a Dekker fan so I know I'll enjoy his. :)

Thanks for the support, all!

Wishing everyone could win.

Great interview!
Thanks for the chance to win this exciting read!

a wonderful posting...thanks for the chance to read this novel :)

Thanks for an opportunity to win a copy of your book!

I have been a fan of James Rubart's since I read Rooms several years ago. Since I have Souls's Gate it would be great to read what happens in the next book in the series!

Memory's Door sounds awesome, I love how James makes me think on the spiritual. Add me please!]
worthy2bpraised at gmail dot com