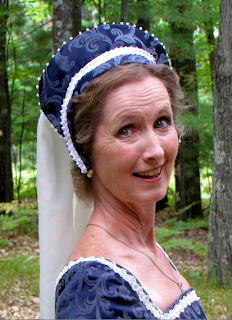 Readers, here's another author, who is new to this blog. I first met LeAnne on the night at the American Christian Fiction Writers conference when we could dress like one of the characters in our books.

Welcome, LeAnne. Tell us how much of yourself you write into your characters.
Who was it who said, “Writing is easy; just open a vein and bleed onto the page”? I think all authors put a lot of themselves into what they write. Some of my early characters were consciously autobiographical. My family lived in during their civil war. When I wrote The Wooden Ox, about a family kidnapped by rebels during the war, I was very much thinking, what if this had happened to us? How would I feel? How would I react? I am the mother in that book. I’m also the daughter who questions God. And part of me is the wounded little boy acting out what he has experienced. For Between Two Worlds I drew on my own feelings about moving between cultures as well as my teenaged daughters’ experiences trying to fit into my home culture in the . The Glastonbury Grail series is told from the viewpoint a young man in the sixteenth century. My life experiences have been very different from his, but that doesn’t mean I’m not feeling his emotions as I write and wrestling with issues of guilt and God’s silence along with him.

What is the quirkiest thing you have ever done?
I’m weird in so many ways. I had my babies in . I hauled them off to in the middle of a war. I worked on an archeological excavation in . We once swam in a river within sight of alligators. I took up figure skating in my 40s and won my first adult competition. I made a sixteenth century costume for my recent book launch (and wore it at ACFW!) Oh, yeah, and I write fiction. If that isn’t quirky, I don’t know what is.

When did you first discover that you were a writer?
I was in my mid 40s. I had this day-dream about a figure skater that kind of took over my mind. I actually wondered if I were going crazy until I found out that making outlines and writing character sketches were things that writers do. That original file is still password protected in my computer; I was so afraid someone would find out what I was doing. Then I got up the courage to share my outline and a few scenes with my kids. “Mom, this sounds like a real book. You should write it!” So I did. Learning to skate started out as book research before it became an addiction. But then addiction figures into the story of Crossovers too.

Tell us the range of the kinds of books you enjoy reading.
I grew up on Lewis and Tolkien and still listen to the audio book of LOTR (Lord of the Rings) once a year. That love extends to all the British fantasies and histories. I’m a huge fan of Mary Stewart’s Arthurian series, Rosemary Sutcliff’s early , and Edith Pargeter’s medieval historicals as well as the Brother Cadfael mysteries she wrote as Ellis Peters. I enjoy modern thrillers and mysteries as well, as long as they don’t involve putting children at risk. I get too emotionally involved in those! I don’t do horror (other than the classics of Frankenstein and Dracula) and avoid romance unless it’s written by a friend. (Or Jane Austin. I’m sure she would have been a friend if we had lived in the same century.)

How do you keep your sanity in our run, run, run world?
I live on a lake in the woods, and avoid the run, run, run as much as I can. When I’m stuck on a scene, I go for a tromp to let my subconscious deal with the problem. I also make it a point to focus on time alone with God first thing every morning. I bring a cup of tea back to bed, read my Bible, and pray through a list I have collected over the years. I find that if I get dressed first, my mind has moved on to what I need to do that day and I can’t get that quiet fellowship back.

What is the accomplishment that you are most proud of?
Raising two lovely daughters who are great moms to my grandchildren and delightful company to me.

If you were an animal, which one would you be, and why?
We have a set of carved napkin rings from . I’m the giraffe. I’m not tall, but I’m thin. I might have chosen the impala, but it was already taken by my daughter.

What is your favorite food?
Raw veggies. That’s why I’m thin. No credit to me. Green salads are my favorite food. I have recently discovered the joy of twenty-five-year-old balsamic vinegar. Try it on greens with a chopped pear, crumbled blue cheese, and a few toasted walnuts. Yummm.

What is the problem with writing that was your greatest roadblock, and how did you overcome it?
“Write what you know” is everyone’s advice. The problem is that what I know is not mainstream —where most inspirational fiction is sold. I returned from three years in doing story hours with at-risk children to learn that being previously published was not an asset. I didn’t have the sales figures the publishers were looking for. No one wanted my novel about a promising African figure skater afraid people at the rink would find out her father has HIV. Glastonbury Tor had been a finalist for a Christie award, but I couldn’t find a publisher willing to do the sequel because the first book had not sold well. It was a major agent at ACFW who encouraged me to self-publish. It has been a long learning curve, and I will not get rich from it, but I have the satisfaction of having my work available to the fans who have been asking for it.  Keeping Secrets, the story about the African figure skater, will be out December 1.

Tell us about the featured book.
Honddu Vale is the second book in the Glastonbury Grail series. In it, Colin Hay returns home from to reconcile with the father he blames for his mother’s death. But he finds Sir Stephen in the arms of a bewitching young woman with designs on more than a place in Sir Stephen’s bed. Belle covets the ancient olivewood drinking bowl that Colin brought with him when the abbey at was closed by King Henry VIII. Yet the cup, which once showed such supernatural power that some whispered it was the Holy Grail, now lies cold and empty in Colin’s hands. Were the glorious promises of God’s presence nothing more than a dream?

Please give us the first page of the book.
Chapter 1
November 1539
I came over Offa’s Dyke, that crumbling line of ancient earthworks that once marked the border between and . The valley where I had been born twisted below me, a green serpent resting between the bracken-covered slopes of the . A thin trail of smoke rose from the stone chimney of Cewi Glen, my father’s manor. It carried a few bright orange sparks that the rain quickly extinguished.

“I can’t,” I whispered, though there was none to hear. I had been gone from Honddu Vale for more than a year, my hands stained with my father’s blood. He had lived, though ’twas no fault of mine. I fingered the scar his sword had left on my wrist as the old feelings of inadequacy and resentment closed over me. There was no sound on the mountaintop except the dripping of fine rain on heather and my breath entering and leaving my lungs as my chest heaved with half-forgotten emotions.

I felt frantically in the breast of my tunic for the cup wrapped in old wool. It was there. Safe. I clutched it and murmured a quiet prayer for strength. Slowly my breathing steadied, and I knew what I must do.

“God, help me,” I said and started down the hill.

A sliver of light slipped into the shadowed valley through a gap in the lingering clouds before the sun disappeared behind the western ridge. The man-at-arms standing guard at the gate of …

How can readers find you on the Internet?
www.leannehardy.net You can see a slideshow of the Welsh setting of Honddu Vale, information about my books, discussion guides, and more. I hope to see you there.

Thank you, LeAnne, for spending this time with us.

Readers, here are links to the book. By using one when you order, you help support this blog.
Honddu Vale (Glastonbury Grail) (Volume 2)

Leave a comment for a chance to win a free copy of the book. Winners in the US will receive a choice of a print or ebook. If the winner is from a foreign country, an ebook will be given. Please tell us where you live, at least the state or territory. (Comments containing links may be subject to removal by blog owner.)

If you’re reading this on Google +, Feedblitz, Facebook, Linkedin, or Amazon, please come to the blog to leave your comment if you want to be included in the drawing. Here’s a link.
Http://lenanelsondooley.blogspot.com
Posted by Lena Nelson Dooley at 6:39 AM

This is the first I have heard of this author. Adding Honddu Vale to my wish list.
Thanks
Amy C
VA

Thank you for having me, Lena. Wasn't that a fun night at conference?

Amy and Angela, I hope you enjoy!

Such a fabulous author photo & a most interesting time period.

Thanks for bringing LeAnne's books to my attention.
what a fascinating life story she has.
Book sounds very good will add to my list.
Thank You
mcnuttjem0(at)gmail(dot)com

Mary, I had so much fun making the gown and French Hood. My next book is about a South African figure skater afraid people will find out her father has HIV. But I'm not sure I want to use me in a skimpy skating skirt as an author picture.

We read Glastonbury Tor out loud as a family and thoroughly enjoyed it. Looking forward to Honddu Vale.

Thank you for such an interesting interview. I can't wait until Keeping Secrets is out!

This book sound really interesting and different. TONJA IN VA