A DATE WITH DEATH - Ace Collins - One Free Ebook 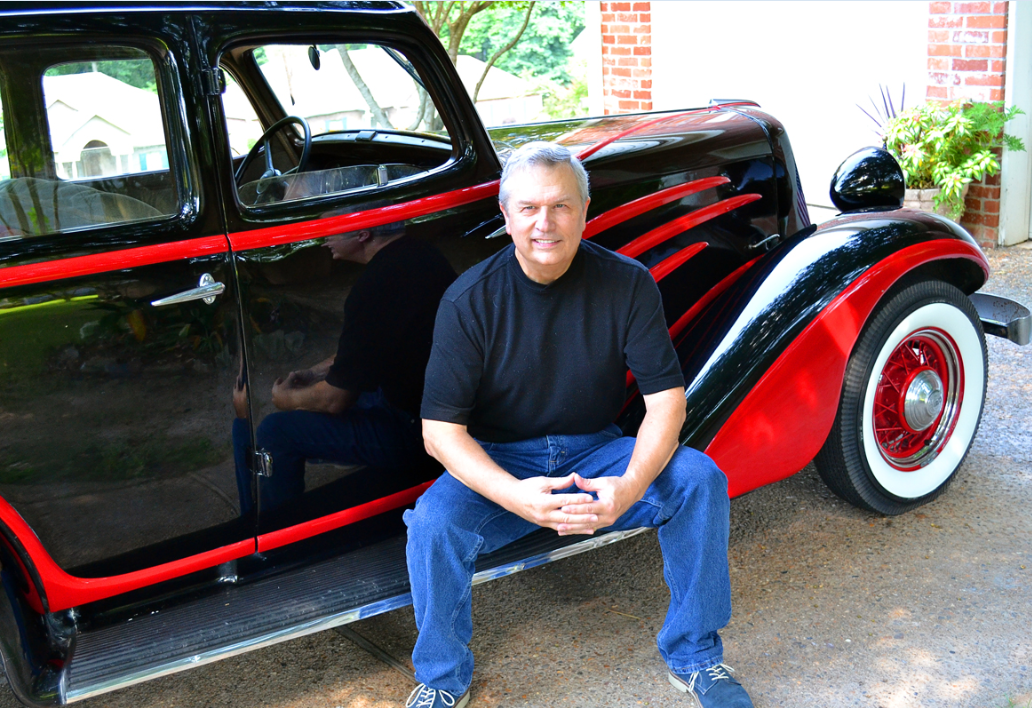 Welcome back, Ace. I love your classic car. How did you come up with the idea for this story?
I so enjoyed creating the lead character, Helen Meeker, as a part of the novel The Yellow Packard, and I wanted to get to know her better. As World War II is a ripe field for mystery and adventure, I opted to look for ways to immerse Helen into actual historical events of that time period and let that lead to exciting fictional plots. As she is a beautiful, bright, and stylish woman with an important job these elements also opened the door for romance. With all that in mind, I created a series of ideas that would take her through the war. A Date With Death is the first episode in the series, the second, The Dark Pool, is out as well, and I just finished the third, Blood Brother. I’m going to continue to spin out an episode a month for the rest of the year, and, if it sells well, maybe even beyond 2014.

If you were planning a party with Christian authors of contemporary fiction, what three people would you invite and why?
Brandilyn Collins, Kathy Harris, and Camy Tang. I have visited with each of them via phone and email but never met them in person. Kathy and I have a great deal in common and therefore would have no problem talking about passions for music and pets. I’d love to pick Brandilyn’s brain on where she gets some of her high-octane plots. I have long had a fascination with Asian-American culture and thus Camy could provide me with new insights in that area. It would be an interesting evening.

Yes, it would. Now let’s do that for a party for Christian authors of historical fiction, what three people would you invite and why?
As I love to write in this genre I would pick people who have really been successful in this area and try to find the secrets to building large fan bases. So I’d grab Francine Rivers, Margaret George, and Lorna Seilstand. The fact their writing is varied and different in style and tone would allow me to learn a great deal more about the craft of writing. I will toss in a bonus guest as well … Don Reid. He is writing fascinating fiction after a career as the lead singer of the Statler Brothers.

Many times, people (and other authors) think you have it made with so many books published. What is your most difficult problem with writing at this time in your career?
To be honest … it is harder than ever to find readers and bookstores. We live in a world where magazines, newspapers, and books are fighting for interest. The publishing business is changing and thus figuring out where it is going and how to market is often more mysterious than my novels. So everything has flip-flopped for me. Now I actually spend more time concerned about marketing than I do creating. This series, In The President’s Service, is an attempt to try something new and see if it might win over some new folks to reading books and take marketing in a new direction.

Tell us about the featured book.
A Date With Death is the follow up to A Yellow Packard and is set in the opening days of World War II. The lead, Helen Meeker, works out of the White House for FDR. In this episode of the series, she tries to save an innocent man from execution and is unexpectedly tossed into world of romance and intrigue where things and people are not as they appear. As the plot unfolds, she has to survive by her wits and instincts as death literally lurks around every corner. It is a fun ride and Helen is the dynamic, interesting woman needed to survive what is thrown at her on every page. The cast around her is fun as well.

Please give us the first page of the book.
Sunday, September 21, 1941
A field in France
Just past midnight, Private Nigel Andrews lay flat on his stomach, hiding in some tall weeds just beyond a French pasture.

The twenty-seven-year-old native was a college graduate. Blond and green-eyed, he was stocky, just a touch over five-eight and an ounce short of 150 pounds. But in this situation, size didn’t matter.

He was tough as shoe leather and hard as iron. In his unit’s boxing tourney, he had whipped men six inches taller and more than fifty pounds heavier. So in spite of his schoolboy appearance, those who knew him never crossed him.

His strength and grit notwithstanding, Andrews had once wanted to become a pastor and was even engaged to a preacher’s daughter he’d met at . But for the moment those plans had been supplanted by a driving desire to get off of French soil alive. His mother and father had already lost one son; they likely couldn’t survive losing two. They’d even fought his being drafted.

He hated the military and everything about it. So no matter the odds, he vowed he would survive this unholy war. He also vowed to make sure that whatever it took, short of his death, ultimate victory would be realized.

“Where is that blasted plane?”

Andrews turned his attention from the horizon to an obviously frustrated Col. Reggie Fister. Speaking to no one in particular and likely just yapping to defuse his anger, Fister continued to lash out. “It was supposed to be here and ready for takeoff. Blimey! We do our impossible job perfectly, and the Air Force can’t even manage to get the easy part right. Whose side are they on anyway?”

I can’t wait for my copy to get here, so I can read it. How can readers find you on the Internet?

Thank you, Ace, for sharing this new book with us.

Readers, here are links to the book. By using one when you order, you help support this blog.
A Date with Death - Christianbook.com
A Date With Death (In The President's Service)

If you’re reading this on Google +, Feedblitz, Facebook, Linkedin, or Amazon, please come to the blog to leave your comment if you want to be included in the drawing. Here’s a link.
Http://lenanelsondooley.blogspot.com
Posted by Lena Nelson Dooley at 6:46 AM

Email ThisBlogThis!Share to TwitterShare to FacebookShare to Pinterest
Labels: A Date with Death, Ace Collins

Cool! I love high-action thrillers and this sounds like it'd be just my kinda thing!
J.C. -Indiana-

Thank you for sharing a great interview with Ace. I am intrigued by this series and the release of a new episode each month. How exciting! I would love the opportunity to read A DATE WITH DEATH. Thank you so much.

I need some fictional action and this book sounds like a good fit.

A Date with Death sounds full of action and intrigue. Please add me!
Merry in MN

Great post! I love this series. Helen Meeker rocks! But I've already read it, so give it to someone else. Blessings!

What an exciting read this promises to be.

I love books by Ace. Winning a copy of A Date With Death would be great!

Working on the 4th episode today and the whole series is fun. Thanks for stopping by and commenting.

A date with death really looks interesting.
Kandra in OK

We have Ace's books in the Church Library.
I would like to win this book to add to our collection.
I enjoy his antique cars too.
Thanks!
Janet E.
von1janet(at)gmail(dot)com

Love the car. I haven't read any of your books Ace, but from the looks of this first page I need to!
Tonja in VA