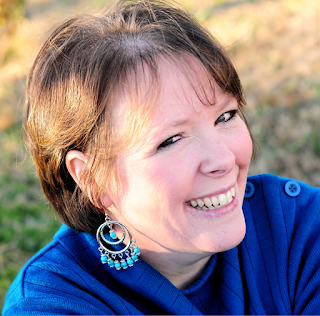 Welcome back, Ginger. God has really been moving in your writing life. What do you see on the horizon?
Good things. God has blessed me to be involved with some great writers in the last year on two different, and successful, boxed sets. He’s also given me story after story to keep the flow going. As of this moment, I do not have any books scheduled to release, but if I can get my health concerns under control, I hope to re-release my Broken Holidays Series as a boxed set and make it available in print in the next month or so. And I would like to get a new Christmas story written and released, but I don’t have much time before it would have to be done, so… *shrug* it might not happen. Such is the flexibility of being an indie author.

Tell us a little about your family.
I have the most awesomest (yes, I know it’s not a word, but it’s true) husband and seven children, ages 24-12; five boys and two girls. We all reside in northern , though, sadly, no longer in the same home. I did my job well, and two of my children have flown the coop with a third looking to move out early next year. I homeschool the youngest three (the others have all graduated). We used to have a menagerie of animals, but for now we are down to one cat, one dog, two turtles, and a flock of chickens.

Has your writing changed your reading habits? If so, how?
Haha. Yes. I have less time to read, first of all. And second, I can’t read just any old book and be happy with it. I have always been a grammar nazi (ask my kids) and haven’t been able to read truly awful books, but now I see the big no-nos that I didn’t know about before – head-hopping, using was too often, etc. It makes it hard to enjoy certain books.

I know what you mean. When the story can silence my inner editor, it’s a good one. What are you working on right now?
Honestly, nothing. I had surgery to remove a tumor on my pituitary gland just over two weeks ago. I had a set-back a week later and was re-hospitalized, so I am still in recovery mode. I plan to get back into it asap and write that Christmas novella I spoke of above, but it depends on my continued improvement.

I’m sure my readers will join me in praying for your recovery. What outside interests do you have?
I love to sing in the choir in my church. I also enjoy playing video games with my sons, coloring in adult coloring books (it’s a great way to brainstorm a book), and various needlecrafts, but I have to be “in the mood” for those. J

How do you choose your settings for each book?
For the Belikarian Weddings Series, I originally intended Belikaria to be just outside southern Turkey, but it was a little too Middle-Eastern for my story, so I went searching slightly more toward Europe and found a little island in the Aegean Sea that belongs to Greece. It worked perfectly for my setting. I could incorporate Middle-Eastern and Greek customs and make my own story world.
As for my other stories, it sort of comes to me as I’m working out the basics of the story. I know a general setting, maybe, and I search Google maps for a corresponding topographical area, or I set it some place I’ve been.

I think my next few books are going to be based in my home state of .

If you could spend an evening with one historical person, who would it be and why?
I think I’d like to meet Robert Frost. I have loved his poems for a long time, and I wonder what he was thinking when he wrote some of them.

What is the one thing you wish you had known before you started writing novels?
How involved the whole process is. I don’t mind writing. I can handle editing. I can make my own covers. I can even do the multiple blog posts required to market. But “pushing” my books on my friends via Facebook, Twitter, and all the other available social media outlets feels so intrusive. Yes, I want to tell them. Yes, they probably want to hear about them. ONCE. But when do I know? Did they see my announcement post? Re-posting about “me” is hard.

What new lessons is the Lord teaching you right now?
Ahh. To be WITH Him. I went to the ACFW (American Christian Fiction Writers) Conference this year and sat in on a class that challenged me not only to write better, but to BE better by doing my writing WITH God, allowing Him the reins in my story, listening to His voice tell me where to go, and trusting in the outcome. Even if the story is not like what everyone else writes. Easy in theory. Hard to practice.

Yes, but it makes the stories so much better. I’m not a plotter, but I do have a storyline and a timeline. God often shows me things that improve my stories so much. What are the three best things you can tell other authors to do to be successful?
Never stop learning the craft. Be willing to try something new. Never give up if you feel called to tell a story. 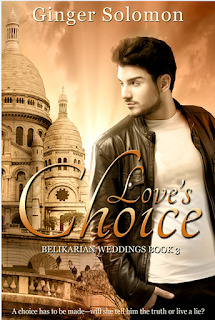 Love’s Choice is the third and final book in my Belikarian Weddings Series. For those who’ve read books one and two, this is Matthias’s story. Here’s the blurb:

Aileen Najjar joins the royal household when her boss marries the princess. She loves working in the kitchen, but when the head cook allows her to prepare most of the meals, trouble finds her. The handsome head of security turns out to be her ally as she struggles to fit in.

Matthias Firat wants to find the mole who leaked information leading to the attempts on the princess’s life. His attraction to the new kitchen helper prompts him to ask for her help.

When she discovers the truth, it might very well break both their hearts.

Please give us the first page of the book.
A sudden movement on one of the security monitors drew Matthias Firat’s attention. What was going on in the kitchen? He leaned forward to get a better look.

Someone stood in front of the stove, stirring something in a large pot. From the back, he couldn’t tell who it was, since most of the women in the kitchen wore black head coverings, blouses, and jeans.

Every few minutes one of the other kitchen servants would walk by and give her a little shove. She didn’t react, just readjusted her stance after each assault.

Another servant started her way. This one shoved harder, and the stirrer bumped into the pot, knocking it over and spilling the contents all over the stove and herself, if her sudden step back was any indication.

He glanced at a different screen with another view of the kitchen. The other women laughed. No one moved to help the stirrer. His gaze shifted back to the original scene. She turned to get some paper towels, and he grunted. Aileen. Pain flitted across her expression as she bent to clean the mess.

Just then Cook walked in, arms flailing. The spoon she always had in her hand waved like she conducted an orchestra. Aileen straightened but kept her gaze aimed at the floor. She nodded a few times but didn’t seem to reply. Cook stomped away, and Aileen resumed her cleaning. Without sound, Matthias had no idea what Cook had said, but by her angry gestures, he doubted it was anything complimentary.

Thank you, Ginger, for sharing this book with me and my readers.

Readers, here’s a link to the book. By using it when you order, you help support this blog.
Love's Choice

If you’re reading this on Goodreads, Google+, Feedblitz, Facebook, Twitter, Linkedin, or Amazon, please come to the blog to leave your comment if you want to be included in the drawing. Here’s a link:
Http://lenanelsondooley.blogspot.com
Posted by Lena Nelson Dooley at 9:51 AM

Thanks for having me, Lena.

I'm in west TN not too far from AL. I have a cousin I visit in Northern AL. The book Love's Choice sounds like a good mystery.

Hello, Ablst nlki I. Lest you be disappointed, Love's Choice is not a mystery. It is a romance with a hint of mystery. I hope you enjoy it anyway. :)

Thanks for sharing.
Connie from KY
cps1950(at)gmail(dot)com

I'd like to think it only gets better from there. 😜

Of the three, this one quickly became my favorite.

Thanks for stopping by.

Vera Godley said...
This comment has been removed by the author.
7:13 AM

This sounds like an interesting plot! I'd love to win :)

Great first page. THis is going on my wish list.

Thanks, Beth. I hope you enjoy it.