When buying a horse don’t consult a pedestrian;
When courting a woman don’t ask advice of a bachelor.
- 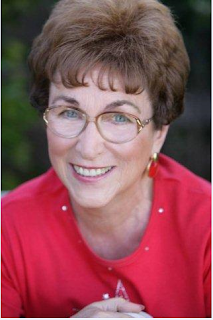 Welcome back, Margaret. Since you’re being published regularly, what new avenues will your future books take?
One of the biggest challenges of being a multi-published author is keeping stories fresh. Through the years, my books have gradually become a combination of romance and mystery, and that seems to be what my readers like. So, for now, I’m staying the course.

If you were in charge of planning the panel discussion at a writing conference, what topic would the panel cover, and who would you ask to be on the panel, and why?
The title of the panel would be Career Survival in a Changing World. I’ve been published for more than thirty years and I can’t tell you how different the publishing landscape is today from when I started. My panel would include writers who have been around for a while yet have managed to thrive in changing times. My dream team would be Susan Wiggs, Susan Elizabeth Phillips, Nora Roberts, Debbie Macomber and, of course, Lena Nelson Dooley

Wow! It’s an honor to be included in that list. How important is it to you to be active in writing organizations?
I would not have reached my writing goals had I not belonged to a writing organization. I’ll always be grateful to the friend who dragged me to my first writers’ meeting. I felt like I had found a home. It was through the organization that I learned my craft and how to be a professional writer.

Where in the community or your church do you volunteer?
I love working with young people and for that reason I’m a Boy Scout counselor. So far, I’ve worked with nearly a thousand boys.

That’s wonderful. I was blessed by a boy’s Eagle Scout project when I was a theater director. Who are the three people who have made the most impact on your life, and how?
I tell my grandchildren that the most important decision they will ever make will be choosing a life partner. I’m glad to say, I chose well. Before his passing, my husband was my biggest supporter. He truly was the wind beneath my wings. His last words to me were, “Keep writing.”

I have to mention the eighth-grade English teacher who flunked me and said I would never make it as a writer. It was years later that I realized she did me a huge favor; for I was determined to prove her wrong and did!

I also can’t forget a former pastor. After I’d made the church picnic read like a Grisham novel for the church newsletter, he suggested that maybe God was calling me to write fiction.

I love that. If you could write the inscription on your tombstone, what would it be?
I would want it to say; “A great big thanks to all who helped walk me home.” 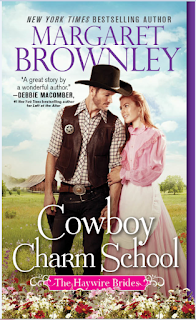 Tell us about the featured book.
I played with the idea for for five years before I actually got around to writing the book. Book ideas generally come to me in scenes. I’ll suddenly visualize someone atop a runaway stagecoach or scrambling over a roof and then have to figure out who and why. The scene that popped into my head for Cowboy Charm School was a wedding scene with a man running down the church aisle yelling, “Stop the Wedding!”

It took me awhile to figure out that the man was a Texas Ranger who thinks he’s saving the bride from marrying an outlaw. He’s mistaken, of course, but his accusations cause the couple to break up. It’s only right that he tries to get the estranged couple back together and that’s when the fun starts.

Here’s the First Page:
Haywire,
1885
Brett Tucker hunkered low in the saddle and urged his galloping horse to go full chisel. The wind in his face and sun at his back, he pressed his boots hard in the stirrups. He didn’t know her name or anything about her; all he knew was that he had to save her.

With a slap of his reins, he yelled, “Giddup!”

His mind raced along with his mount’s pounding hooves. But what if he was too late?

A farmer pulled his wagon to the side of the road, allowing Brett to race by unhampered. Mavericks raised their tails and ran. A buffalo lifted its shaggy head and bellowed.

Jaw tense, Brett narrowed his eyes against the dust, and glare of the hot white sun. The only things identifying him as a Texas Ranger was the Colt at his side and the shotgun slung from his saddle. That and maybe his grit.

It was his grit that brought him to this moment. The moment he’d waited for. Waited too long for; Three years, two months and twenty-one days to be exact.

The road sloped upward, slowing his progress. Digging his heels into his horse’s flanks, Brett urged him up the hill. “Come on, Soldier, come on.”
His mount crested the hill and the steeple of the white church came into view.

Behind him lay the town of ; Before him the moment he’d hoped would forever define him as a man.

The horses and wagons parked outside the church gave Brett a small measure of comfort. In less than two minutes, the wait would be over, and he would have done a woman a favor in the process. That is, if he wasn’t too late.

One minute. Anticipation coursed through his body.

Reaching the church, he pulled hard on the reins and Soldier’s front legs rose in the air. He slid out of the saddle, boots hitting the ground hard. With one quick move, he wrapped the reins of his horse around the hitching rail and reached for his holstered Colt.

Surprise was on his side and he dared not waste a minute. Taking the steps two at a time, he rushed through the double oak doors leading inside the hushed chapel and ran past the two startled ushers. He hated ruining a bride’s wedding day, but better now than later. No woman in her right mind would knowingly marry an outlaw.

“Stop the wedding!” he yelled, and a collective gasp greeted his outburst.

Dear Readers, you can see why Margaret is one of my favorite authors. Her stories never disappoint.

Thank you, Margaret, for sharing this book with me and my blog readers. I’m eager to read this story. I have been since I first saw the title. When my book arrives, it will go the top of my to-be-read pile.

If you’re reading this on Goodreads, Google+, Feedblitz, Facebook, Twitter, Linkedin, or Amazon, please come to the blog to leave your comment if you want to be included in the drawing. Here’s a link:
Http://lenanelsondooley.blogspot.com
Posted by Lena Nelson Dooley at 10:53 AM

Oh, sounds like a fascinating book. Thanks for the chance.
Mindy from NJ

This sounds like a good read. Cowboys in those days needed to be taught manners and how to behave in front of people. Vivian Furbay of CO

Thank you for your interest.

How fun! Sounds like a book not to me missed.

I can always count on a Margaret Brownley book to bring me fun and entertainment and a light read that takes me out of the doldrums. Such fun!

Vera in North Carolina and we were spared the flooding and winds of Florence in our area, but sadly so much of North Carolina is once-in-a-thousand-years disaster. My birth city of Wilmington is still isolated and can't be reached by major highways since they are still flooded.

I've been seeing this book and looking forward to reading it. Love the cover by the way!

Thank you for telling me about "COWBOY CHARM SCHOOL" - Margaret Brownley.

Loved reading the interview and learning more about this new to me author. Really liked her selection for her tombstone.

After reading about the book and getting to read the first page, I know that would be a book that I would thoroughly enjoy so it's definitely going to my TBR list.

Appreciate the chance to win a copy of the book.
Kay Garrett from Mountain View, AR
2clowns at arkansas dot net

Oh, this book sounds so fun! I'd love to win a copy!

I always enjoy reading Margaret Brownley''s books. I enjoy her mix of humor, faith, romance, and action. Cowboy Charm School sounds like another great book. Thanks for the chance to win it.

This looks good!
Abigail in VA

Thank you for sharing your great interview. Would love to read your book.

"COWBOY CHARM SCHOOL by Margaret Brownley sounds wonderful.PA. Thank you for the opportunity to win.

I have read several of her books in the past and have always enjoyed them, as historical fiction is one of my favorite genres. Thank you for the interesting interview. Jane TX