Dear Readers, Gail is a long-time friend of mine who lives in . We both started out being published by Barbour. I’ve not met her husband, but he’s the one who put up my first web page. I’m really interested in this book they’ve co-written. 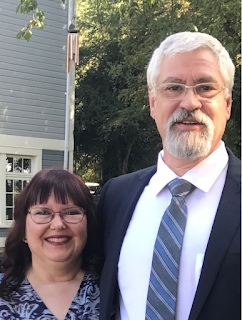 Bio: Tim and Gail Sattler have been (happily) married for 40 tears, In that time, Gail has published 43 novels/novellas, and 6 works of non-fiction. Tim and Gail enjoy having recently become empty nesters, and this is their first co-written book.

Back cover blurb:
Michael wants to save his daughter, but first he’s got to save the world.

Michael and Charlotte meet when Michael is trying to find Ashley, his missing daughter who has fallen into drug abuse, and is searching for her son Jon, a brilliant and aspiring young scientist who has also gone missing.

Ashley and Jon should have nothing in common, but after the murder of Jon’s favorite professor, they become ensnared in a tangled web that becomes worse with every new discovery.

When Michael and Charlotte join together to figure what their children have become involved with, they, too, are sucked into a sinkhole for which there are no answers, only more questions.
When all seems lost, will they all recognize the source of strength offered to them, and… will they take it?

Welcome back, Gail. How did you come up with the idea for this story?
Mercury Rising was actually my husband's idea. When I was working graveyard shift at my job and he was working from home, we would take our youngest son to school, then on the way home we would take the dogs and walk along the dike path and talk.
Unfortunately no one took notes while we were walking, but we weren't in any rush, so it took almost the entire school year. Once we had the premise, we kept building the series of events, and at the end of the school year, we had a story with all the details. I always do a full outline when I write a book, so we were ready to go.

Gail, you and I are exact opposites in the way we write. I’m a seat-of-the-pants writer. If you were planning a party with Christian authors of contemporary fiction, what six people would you invite and why?
Rebecca - she was the managing editor for Heartsong Presents when I first started writing, and she's a fantastic editor and a great person
Lena Nelson Dooley - and I first started writing for Heartsong Presents at about the same time. She's a kind and gentle lady, and a great writer.
Colleen Coble - she's a great writer and a wonderful person
Jim Rubart - a great writer and a great guy.
Debbie Macomber - my favorite author, and she's written so very many books and she they never get old or repetitive.
Frank Piretti - he's a groundbreaking author, and I've met him in at an OCW conference, and he's a nice guy

I would really love that party. Those other authors and our editor Becky are some of my favorite people. Many times, people (and other authors) think you have it made with so many books published. What is your most difficult problem with writing at this time in your career?
Marketing. When I first started writing, all I had to do was write the book. Now the author has to promote the book, and themselves. With the advent of Amazon, so many bookstores and publishers have shut down or dropped fiction, the market has changed so much. Unless you write a lot, and have time to market, it's hard to make a dent. Not only that, a lot of books are flooded into Amazon so it's hard not to get buried. 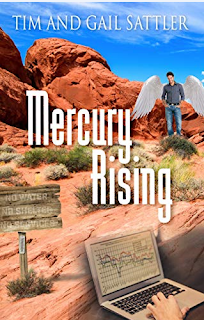 I know what you mean. Tell us about the featured book.
This is the story of two single parents Michael and Charlotte (one widowed, one divorced) and their adult children Ashley and Jon, who are in their last year of college and university. Jon's professor has been murdered and left specific instructions in the event of his death. Following cryptic clues, the answer must be found before it's too late … for humankind.

Please give us the first page of the book.
“Ashley, I’m home!” Michael pulled the door shut behind him.

He held his breath, hoping to hear some normal, homey stuff. Noise from a blaring television and the latest sitcom. Giggles from his college-aged daughter watching dumb videos on YouTube. Even the smell of a neglected supper starting to burn.

Instead, there was nothing.

He unlaced his work boots and tossed them onto the rubber mat. On the positive side, even though he didn’t smell supper cooking, he also didn’t smell the pungent odor of pot or the cloying stench of dollar store candles trying to hide it.

Michael headed straight toward Ashley’s bedroom, hoping to find her with headphones on and her music turned up full blast, oblivious to the outside world, but at home.

The wide open door told him she wasn’t.

Inside, clothes littered the floor. Makeup, lotions, and hair products lay askew, spread all over the dresser.

He sighed. On the rare days Ashley actually talked to him, he didn’t want to make things worse by nagging about her pigsty of a room. She shouldn’t need to be reminded to clean up after herself. She was technically an adult.

Michael squeezed his eyes shut. Ashley hated when he said it out loud, but regardless of her age, Ashley would always be his little girl.

A little girl who had fallen in with the wrong crowd, growing further and further away from him. He couldn’t remember the last time they’d sat together in the living room watching television and sharing a bowl of bad microwave popcorn.

“I guess I’ll just make supper for myself,” he announced to the teddy bear lying in the middle of the unmade bed then turned and headed for the kitchen.

Once there, a red light indicating a new message flashed on the telephone.

It wouldn’t be for him. It never was.

I’m eager to know what happens next. How can readers find you on the Internet?
Visit Gail Sattler's website at www.gailsattler.com
Facebook - https://www.facebook.com/gail.sattler.3
Gail's blog topic is What Goes On In The Mind Of A Writer - http://www.gailsattler.com/category/new/
Gail Sattler's author page at https://www.facebook.com/Gail-Sattler-author-568988573496833/?modal=admin_todo_tour

Thank you, Gail, for sharing this new book with my blog readers and me. I can hardly wait for my copy to arrive.

If you’re reading this on Goodreads, Google+, Feedblitz, Facebook, Twitter, Linkedin, or Amazon, please come to the blog to leave your comment if you want to be included in the drawing. Here’s a link:
Http://lenanelsondooley.blogspot.com
Posted by Lena Nelson Dooley at 9:42 AM

This sounds very intense and intriguing! Thanks for sharing.
Connie from Kentucky
cps1950(at)gmail(dot)com

Thanks, this was a really fun book to write.

Thank you for the chance to win a copy.