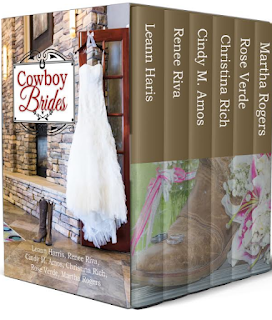 Welcome, authors. How did the stories for your collection come about?
Once our publisher, Cynthia Hickey of Winged Publications, set out the collection title Cowboy Brides last February, the bones started falling into place quickly. Early on, we landed on the idea that all six parties headed for a trip down the aisle could be from one large ranching family, and the matrimonial die was cast! Enter the Danner family, where three sons and three daughters would find romance while living on ’s . Martha Lou needed a visual on the ranch house, so we decided on a sprawling home with separate wings for the guys and gals. The next essential: the order of the weddings—which would not parallel birth order! To lend credibility, that also set the order the stories would fall inside the collection. Here’s a look at that wedding order: Melissa Danner (by Leann Harris), Brandy Jo Danner (by Renee Riva), Rait Danner (by Cindy M. Amos), Noah Danner (by Christina Rich), Wyatt Danner (by Rose Verde), and Kylee Danner (by Martha Rogers). Characterizations developed along the way, ranging from feisty (Brandy Jo) to downright rebellious (Kylee). You could say that most of the romances occurred out of the blue! Tied together by ranching chores and civic duties at the nearby fictional town of , the love stories blossom despite the open range’s isolation and family obligations. Don’t expect sibling support at first appearance, however, as the love interests all have to meet with collective approval—not an easy task!

What is the hardest thing about writing in a collection:
Cindy Amos: Above all, I wanted to represent the characters belonging to other authors in
the correct light. If I chose to alter my assigned character later, or have them go through
transformation, I had full liberty to do so. But to verify I had handled another person’s
Danner character true to form, I would send that author snippets of scenes for approval.
Often, that would spark the next idea, and so we fed off of each other’s creativity.
LeeAnn Harris: Getting all the details right. What the ranch looked like, the town, how
each brother or sister related to the others.
Renee Riva: Coordinating the time lines and actions of the other characters with five other
writers!
Christina Rich:
Rosa Verde: Getting the facts straight like what does the house look like, when did their
mom die, what's the order of the siblings and when they got married, the town, to mention a
few.
Martha Rogers: Keeping every character in the right voice and staying true to
the personalities. I had to read all of the others first to make sure I kept all the facts in order
and include more information about their lives after the weddings,

How did collaborating with this team impact you?
Cindy Amos: Fun to co-ordinate with others and read their stories.
Leeann Harris: I needed to remember the others were following me. Missy is the oldest
daughter, but the second child.  The oldest is a boy, but in family dynamics it is usually the
oldest daughter that ends up the family caretaker.
Renee Riva: It was challenging, but by the time we finished I felt like we really were the
Danner family. I really got to know my fellow authors better. That was a nice highlight
Christina Rich:
Rosa Verde: Basically, it showed me we could work as a well oiled team if everyone is on
the same page.
Martha Rogers: We all enjoyed collaborating with each other and getting to know the
different authors and read their stories.

A peek into our stories: (In order)
Leeann Harris: Going Home:
Melissa:
Once back in his truck, Nate glanced at the girl he’d known all his life. She was Noah’s little sister, who always tagged along with them. Tonight, however, having her backside in his face for several minutes changed things. This was not the skinny tomboy he remembered. When she turned, bringing them face to face, he didn’t remember her eyes so blue or her lips so kissable. Whoa-—what was going on? The electricity scrambled his brain.

Renee Riva: To Love a Cowboy:
Brandy Jo has had a crush on shy Dane Bronson since third grade. After eating at the Branding Iron Grill where Brandy Jo waitresses, he finally works up the nerve to invite her on a sunset ride on horseback. Alot of drama and humor cross their trail before they head for the altar

Cindy Amos: In Renegade Restoration:
Rait: civic-minded Rait Danner heads the restoration project for Silverdale’s district. After hiring the most outstanding candidate as the nonprofit’s new director, Serena Thornton turns out to be both beautiful and resourceful—but her tattered jeans distract Rait from the lovely woman inside until a family-plotted slow dance at a sibling’s wedding reception brings him to his senses.

Rose Verde: Lassoed By Love:
Wyatt Though recovering from a near career ending injury, Wyatt Danner is determined not to be just another washed up bull rider. Months before his doctor thinks he's ready, he's preparing to get back on the circuit. Then his neighbor asks him to care for her horses while she deals with a family problem. Despite his schedule he agrees. In the most unlikely of circumstances, he meets magazine journalist, Christole Spencer. But he's sworn off people like her. Except that God had other plans.

Martha Rogers: Rodeo Mix-up
Kylee: Now the last one home, Kylee is determined to quit college and join the rodeo circuit as a barrel racer to be with her boyfriend, Jesse Martin. Her brothers are dead-set against it and believe Jesse is an ex-con out to charm Kylee for the Danner fame and fortune. However, startling revelations come to light to show Jesse he isn’t who he says he is, and a lot more than the Danner reputation is at stake.

Where Can Readers Find You:
Leeann Harris: www.leannharris.com , Facebook https://www.facebook.com/authorLeannHarris/

Thank you for sharing this new collection with my blog readers and me. I’m eager to read it.

Readers, leave a comment for a chance to win a free copy of the book. There will be 4 winners who will win the collection or whatever individual book they choose. You must follow these instructions to be in the drawing. Please tell us where you live, at least the state or territory or country if outside . (Comments containing links may be subject to removal by blog owner.)

If you’re reading this on Goodreads, Google+, Feedblitz, Facebook, Twitter, Linkedin, or Amazon, please come to the blog to leave your comment if you want to be included in the drawing. Here’s a link:
Http://lenanelsondooley.blogspot.com
Posted by Lena Nelson Dooley at 12:04 PM

Wow, Rose here from Alabama. I love all these authors, would love to win one of these books, Congrats ladies

Hi, enjoyed reading this, the books sound very intriguing. I live in West Texas. my email is aliciabhaney@sbcglobal.net

Loved how you all worked together. Enjoyed the comments from the writers and how they were able to connect with details and bring a story together.

Illinois, USA
These sound like such fun books.
I love reading about how different ladies respond to different men.
quilting dash lady at comcast dot net

I have not seen this book, thank you for bringing it to my attention and the chance to win a copy.

The COWBOY BRIDES collections sounds amazing. I only has one sibling and I can imagine the interaction, disagreements and love between all the kids of the Danner family. I would really enjoy having the opportunity to read each book and see how they relate to one another while learning more about this clan.

Enjoyed reading the interview with all the authors learning more about how the series came about and a bit of each story.

Appreciate the chance to be one of the fortunate four!
Kay Garrett from Mountain View, AR
2clowns at arkansas dot net

Thank you all for stopping by. We loved the Danner family and we think you'll love then as well and enjoy seeing a little of what happens with each couple as the stories progress. I had fun with the last girl, Kylee, because I got to reveal some new stuff coming down the pike for the Danner clan. Wishing you all the best in winning a copies of our book.

Love to read about cowboys!! Happy Valentine's Day Y'all!!

So fun to read all of your comments. Thanks for stopping by! I loved writing with all of these ladies, and hope all of the winners enjoy the Danner stories.
Xox
Brandy Jo
Aka:Renee

I like historical Christian fiction and wuold enjoy reading these books. Vivian Furbay of CO

I would love to read this series. I live in Escondido California. ohdothellodothiyaatgmaildotcom

I've loved reading your comments and wish all of you could be winners. Thanks for visiting with us and learning more about Cowboy Brides.

great authors! love to in the book! Shelia from Mississippi

I always enjoy collections. Thanks for this chance!
Blessings!
Connie from Kentucky
cps1950(at)Gmail(dot)com

Love this all really good authors, would love to win.