Editor's Bio: Jamie West is an executive editor with Pelican Book Group. She has been integral to the Pelican Book Group acquisitions process since 2009, and has had the privilege of working with many talented authors.

Why I bought these book to publish:
As an editor, I am always thrilled when I come across an author with a unique, interesting story. Sometimes, especially at conferences, the authors have only a few chapters written when they pitch a book, so while we ask to see the manuscript when they finish, it is actually rare to see those books, as authors lose interest or change direction in their careers.  At a conference a few years ago, I met Edna Lee Allen. She didn't pitch one story, but three, and with the exception of the final chapters on the third book, they were all finished. I was pretty excited because the synopses were intriguing and on a subject near and dear to my heart: Western stories about mail-order brides. 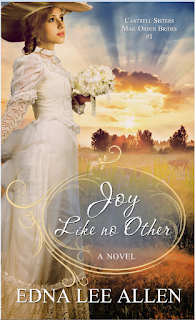 The years before the Civil War were filled with fighting over states' rights and slavery. As the Western Expansion began, opening up vast territories to be settled, tension increased over what was seen as a grab for power. Congressmen manipulated events to set in place what they felt the people wanted. While they settled issues back East, many men were already migrating West, looking for new opportunities to own land, build empires, or even running from whatever they wanted to leave behind. There were whole communities of mountain men, soldiers, gold miners and settlers.


With the move West came issues of territory. The rights of the Natives who lived in these territories were determined by "peace treaties" that were often broken by both sides, which made for volatile living conditions for all.  While there were camp-followers and wives who moved with their husbands, there still weren't enough women to marry. 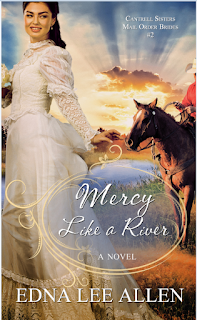 For fear of someone staking a claim on the homesteads they had traveled so many miles to obtain, men didn't want to leave their lands to travel back to the East to find wives, so the "heart and hand" columns in Eastern newspapers became a real thing. Men started advertising for wives, stating their needs plainly, giving their own qualifications in providing for a woman, and often showing hints of their own personalities.
Into this rough-and-tumble time in 's history, Edna Lee Allen's stories are born. Three sisters with no prospects in their own hometown decide to run West to find husbands. The oldest sister has already been corresponding with a man, and has slated her second eldest sister to be the wife of another man in the same territory. The youngest sister has been given a school teacher job in a small community nearby, where, despite there being children to teach, men still outnumber the women. Circumstances being what they are, each woman finds the new, scary prospect of traveling West in hopes of being married better than their past life of poverty and abuse. And thus, Edna Lee Allen’s Joy like no Other, Mercy like a River, and Grace like a Whisper come to life. 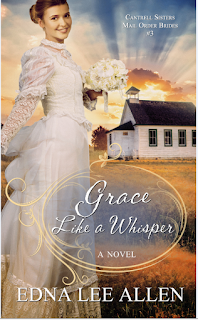 With surprising plot twists, Edna Lee Allen dives deeply into each character's personality.  The women, out of place in history's social mores, show emotions with graceful dignity, despite their fears. The men, reaching out to meet society's expectations and their own hopes and dreams, question their decisions and strength of character. The reader learns and is enlightened by each character as they navigate the stormy waters of relationships founded on mutual benefits, rather than the stirring emotions evoked by love. When love finally enters each story, a whole new set of problems arise, and the characters have to adapt to the changes before confessing their love for each other.

I hope the reader finds these stories to be as refreshing and unique as I did. While the romance of history is there, I felt Edna Lee Allen captured the real feelings of people who have to do what they must to survive, and when they find love in the situation, they live with peace and hope for the future.

Thank you for sharing these books with me and my readers. I’m eager to read them.

Readers, leave a comment for a chance to win a free copy of one of the books. You must follow these instructions to be in the drawing. Please tell us where you live, at least the state or territory or country if outside . (Comments containing links may be subject to removal by blog owner.)

If you’re reading this on Goodreads, Feedblitz, Facebook, Twitter, Linkedin, or Amazon, please come to the blog to leave your comment if you want to be included in the drawing. Here’s a link:
Http://lenanelsondooley.blogspot.com
Posted by Lena Nelson Dooley at 12:18 PM

Thank you for sharing this post. I would love to read this authors book. I also love mail order brides. quilting dash lady at comcast dot net

Such beautiful covers! Thanks for sharing! Have a wonderful day!

I'm from Virginia, and love the look of these books! The covers are amazing and the descriptions are intriguing!

I love these covers and the titles! I am adding these to my wish list, thank you for bringing them to my attention.

Edna Lee Allen is a new to be author. After reading about her books I'd love to get to know her through her writing. Lovely covers that would draw me in.

Thank you for the opportunity to win one of these great sounding books.
Kay Garrett of Mountain View, AR
2clowns at arknasas dot net

Hello Lena and Edna! These books sound like ones not to miss.

As a history buff who majored in History in college, my emphasis was Civil War and Reconstruction. These books sound absolutely terrific. I can't even imagine how terrifying it was for a woman to travel west in the hopes of finding love. But on the other end is a man terrified of the woman coming out, hoping to impress her enough to love him. I find mail-order brides so fascinating. Thank you for sharing this with us!
Tamara from TX

I love books set in the Civil War period and Reconstruction. Thanks for the chance to win one of these books.
Beth from Iowa

Edna Lee Allen is a new to be author. I would love to read Edna's books. Edna Lee Allen's books sounds wonderful.PA.