Bio: CLARE REVELL is a British author. She lives in a small town just outside with her husband, whom she married in 1992, their three children, and unfriendly mini-panther, aka Tilly the black cat. Clare is half English and half Welsh, which makes watching rugby interesting at times as it doesn’t matter who wins.

She currently looks like the photo below, although her hair style changes daily depending on how the hair dryer actually dries it. This photo was taken on a good hair day.

Welcome, Clare. Tell us how much of yourself you write into your characters. 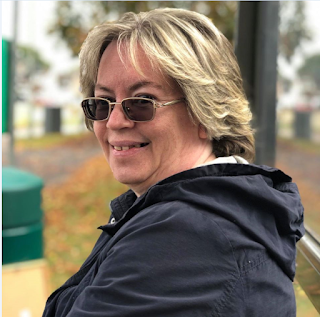 There is probably more of me in them than I realize. Hubby says they use the same phrases I do, afty instead of afternoon for example. But it’s hard not to. They also all sound British…funny that since I am British. But none of them like peas, they are all terrified of spiders, and all the heroines crochet in their spare time. Even if that’s not in the book it’s in the character notes I have on every single person I’ve included in a book.

Dad would say a lot. I sneak little bits from real life in to everything I write and Dad always finds them. Sometimes really little things, like the couple who hold hands in church on a Sunday, to big things like events from holidays when I was growing up.

What is the quirkiest thing you have ever done?
I’ll think about that one and come back to it. OK, thought and came back to it. Still don’t know. Let me go and stir the slow cooker – yes it’s only 11.46am but dinner’s been in there since about 9.30 and it needs a stir.

OK, it must have been eighteen months ago when I dyed my hair. Instead of blonde it went orange. Bright orange. So I redyed it and it went a revolting dark orange. So I gave in and went to the hairdresser. She said she could fix it but it’d cost £60. I asked how much to have it all chopped off. She said £15. No contest. I had a grade two. It’s finally long enough to tie back again now. Needless to say, the hairdresser now dyes it for me. Well, highlights it blonde to hide the grey. Kids say I’m not old enough to be grey yet…

When did you first discover that you were a writer?
When I was five, I always wrote detailed stories in school. I got a commendation for creative writing when I was ten and never looked back. I started in fanfiction – sci fi actually – Blake’s Seven, Dr. Who, Stargate – and then turned to my own stories.

Tell us the range of the kinds of books you enjoy reading.
It’d probably be easier to say what I don’t like reading. I love romance, thrillers, sci-fi. Action books as well as long as police procedural novels. So Tom Clancy, Patricia Cornwall, Elizabeth George, Marianne Evans, and Mary Manners are a few that spring to mind.

How do you keep your sanity in our run, run, run world?
I bury myself in a new book. I crochet, play games in the evening with my daughter. I’ve also started to read the Bible in a year. The version I have is a chronological one for my kindle and it’s fascinating. Really hard not to just keep going, and it’s much easier to read this way than in columns for some reason.

How do you choose your characters’ names?
I have a notebook with all the names I’ve used so far. I’m trying not to use the same letter quite so much. The letter J features rather a lot. So if I have an unused letter, I’ll go to a baby name site online and pick one that way. Or if there’s a name on the TV I like, then I’ll use that.
I also cast the characters which usually comes before their names. So they have to look like an Yvetta or a John or a Toby or whatever. It’s no good having a character called Juan Hernandez and making him white and Scottish for example.

What is the accomplishment that you are most proud of?
Trying not to be proud of anything, but that would be my three children and being married for 27 years.

If you were an animal, which one would you be, and why?
An owl, because they, like me, are up all night long or at least awake for a great part of it. Does make good writing time though as the house is quiet.

What is your favorite food?
Chocolate! Other than that it’s roast beef, puds, roast spuds, roast parsnips, swede, cauliflower, cheese, carrots, cabbage, and leeks. Covered in beef gravy made with the juices of the meat.

What is the problem with writing that was your greatest roadblock, and how did you overcome it?
Getting distracted. Best avoided by not doing laundry, hoovering, ironing, cooking, or working on the computer. Although that leads to people complaining there is no uniform and no dinner. And missing deadlines as nothing is typed up. 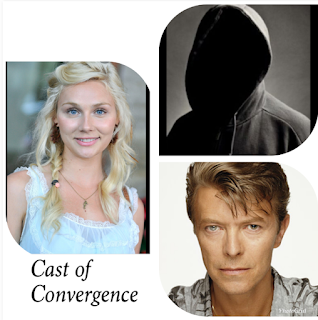 Tell us about the featured book.
Convergence is a time travel romance with a fantasy edge. It started life about three years ago, under the title Dancing Man, then a dozen other titles before we settled on Convergence. Draft one was written during nanowrimo as an add-on to the already completed 50k of something else.  In my head, Yvetta was played by Claire Bowen and Blaize/John by David Bowie. So this picture  is what I had in front of me as I wrote.

And I’m totally in love with the cover. It was designed by Nicola Martinez and she did an amazing job as always.

Blurb:
Even as a teenager Yvetta Graham had vivid dreams. Ones she couldn't tell from reality. Only now she's almost thirty and beyond such things.
Only the new store manager is a dead ringer for the man from those dreams. Who is John Smyth? What is his reason for coming to Headley Cross? Is he really a time traveler?
As dreams and reality converge, Yvetta is in a fight for both her sanity and soul.

Please give us the first page of the book.
Prologue
Where you go I will go, and where you stay I will stay. Your people will be my people and your God my God. ~Ruth 1:16
Yvetta ran down the stone hallway of the huge castle and stopped breathless as a tall boy with spiky yellow hair moved from behind the pillar to stand in front of her. His funny clothing looked weird, but somehow suited him—even if he was wearing tights with a long shirt over the top of them, and an even longer blue coat over that. 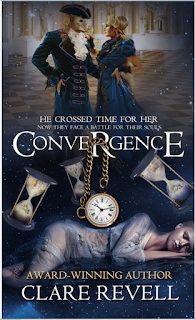 The boy hunkered down to her height, balancing easily on the balls of his feet. His strange eyes glinted in the torch light. One was green and the other one was brown. “Hello. I’m Blaize. What’s your name?”

The young man smiled. “In that case, Yvetta May Graham, my name is John Blaize Smyth Kilpatrick.”

She squeaked out a nervous giggle. “That must take ages to write in school when they want your full name.”

“Which is why everyone calls me Blaize. At school they call me Smyth Kilpatrick, but that is just as much of a mouthful, and I really don’t care for it much.” He tilted his head. “It seems to me the last time we met you said your name was Etta.”

She nodded, twirling a long strand of hair around her fingers.

“So, how about I call you Etta and you call me Blaize, and we forget the long names and formalities?”

She thought for a moment. He wasn’t a stranger because she knew his name. Plus, she’d met him before, so it must be all right to talk to him. “OK.”

Thank you, Clare, for sharing this book with us. Time Travel fascinates me.

Readers,  leave a comment for a chance to win a free copy of the ebook. You must follow these instructions to be in the drawing. Please tell us where you live, at least the state or territory or country if outside . (Comments containing links may be subject to removal by blog owner.)

If you’re reading this on Goodreads, Feedblitz, Facebook, Twitter, Linkedin, or Amazon, please come to the blog to leave your comment if you want to be included in the drawing. Here’s a link:
Http://lenanelsondooley.blogspot.com
Posted by Lena Nelson Dooley at 12:25 PM

Thank you so much for having me here.

Hi Clare. I like your favorite foods. Chocolate is on top of my favorites, too. Congratulations on your new release.

I love how you just chopped your hair off. LOL! I've done that in the past, but not recently! Congrats on your new release! It sounds great!

Great interview. Thanks for sharing.
Connie from Kentucky
cps1950(at)gmail(dot)com