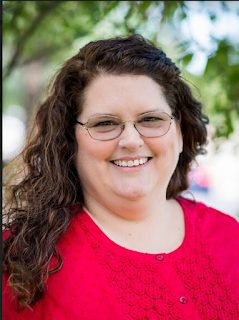 Erica Vetsch brings her much beloved Serendipity and Secrets series to a close with the highly anticipated release of The Indebted Earl. This latest installment tells the story of Lady Sophia Haverly, the free-spirited and energetic younger sister of Marcus Haverly readers will remember from The Gentleman Spy, and Captain Charles Wyvern, a longtime naval officer trying to find his footing on dry land.

Q: Both Lady Sophia Haverly and Captain Charles Wyvern feel a responsibility to care for someone who is left behind. From where does that sense of duty come? Lady Sophia’s care of her fiancé’s mother is born out of her love for him. She was also instilled from birth with the social customs of noblesse oblige. As a woman of noble birth, she has an obligation to live up to that nobility by behaving nobly. While her fiancé is at war, he has entrusted her with the care and companionship of his mother, Lady Richardson. Sophie is delighted with the responsibility, because it allows her to demonstrate her love, and it gives her a bit of freedom that living in her older brother’s household would not afford.

Captain Wyvern naturally shoulders responsibility for his ship and his crew. As the leader, everyone under his command is also under his care. This responsibility extends to the dependents of his crew, including the fiancée of his late best friend. Charles feels he bears the blame for his friend’s death, and he must attempt to make some sort of amends. His natural leadership abilities cause him to throw his mantle of responsibility over Lady Sophia, Lady Richardson, the three waifs who wash up on his shore, and the estate and community he’s inherited.

Q: What is Sophie struggling with spiritually in The Indebted Earl? Is Charles facing something similar? Sophie struggles with the idea that God is both good and sovereign. It’s easy to accept one or the other, but both? How can God be good when He’s taken her beloved fiancé away? How can He be sovereign when bad things happen? How can she trust in His plan when it seems everything is spinning out of control? 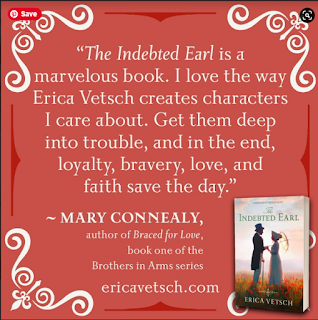 Charles’s struggle is similar in that he is all about control, about ordering his life according to his plan, but with the cessation of war, he is on the beach without a command. And he’s carrying a tremendous weight of guilt over the death of Major Richardson. Did God make a mistake, having Rich die in his place? What Charles wants—to continue his naval career—is both noble and reasonable. Why won’t God make it happen?

Both Sophie and Charles are learning to trust in the sovereignty and goodness of God’s plans, and realizing that His ways are not our ways and His thoughts are higher than ours.

Q: Marcus tries to get Sophie to come back to Haverly Manor with him after her fiancé dies. Would a single woman in her situation during the Regency period have the choice to live on her own?

It would be difficult for an unmarried woman in the Regency era to live on her own. Though Sophie had the financial means to live independently, it would have been considered improper for her to live alone. However, for her to continue to live with Lady Richardson, as her companion and friend, was entirely proper.

Though Marcus is acting out of an abundance of compassion and brotherly concern, Sophie is reluctant to return to his home. She’s reluctant to give up the freedom she’s gained, as well as reluctant to live in a house where everyone will be watching her grieve. She wants to remain at Primrose Cottage with Lady Richardson.

Q: All of your leading men in the series end up with titles and responsibilities they weren’t expecting. Within moments of arriving at his new home, Charles’s new responsibilities multiply. Can you tell us about the surprise he receives?

Charles finds himself as the guardian to three young girls, sisters who were born on the estate. His uncle, the previous earl, had, for reasons of his own, taken on the orphaned girls as his wards and paid for them to go to boarding school. But at his death, the girls were returned to the estate.

The eldest is nearing womanhood and is a romantic, eager to fall in love and bewildering to Charles. The second is a daredevil, tomboy, and adventuress in whom Charles sees glimpses of his younger self. And the third is a girl barely six summers old, who is fascinated by Charles and imitates him at every turn. He’s not certain which of the girls scares him most, and as a collective, they have that crusty old sea captain shaking in his boots.

Q: Something doesn’t seem quite right with the staff at and the surrounding village. What does Charles pick up on? What trouble does he find himself in?

Charles encounters inconsistencies in the behavior of those on the estate and in the nearby town. The town is more prosperous than he anticipated, people have possessions he didn’t expect, and there are signs that something is amiss. 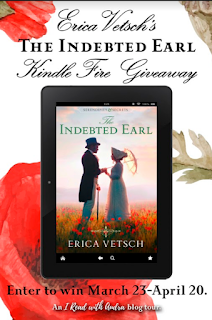 Q: Will you be sad to let this trilogy—your first Regency series—go? What can readers look forward to next?

There’s such a sense of accomplishment and satisfaction in seeing this series completed, but to answer your question . . . YES! I am so reluctant to let these stories and characters go that I’m bringing some of them back in my new series, the Thorndike and Swann Regency Mysteries!

The first book, The Debutante’s Code, should arrive in the fall of 2021 and features Lady Juliette Thorndike and Bow Street Runner Daniel Swann in a fast-paced tale of intrigue, espionage, and art thievery!

Q: Where can Regency fans go to interact and talk about books on Facebook? I am thrilled that we have a place on Facebook to discuss all things inspirational Regency romance. There is a lively and growing community of readers that can be found at https://www.facebook.com/groups/2568745689914759 . We have contests, giveaways, polls, notices of sales, reviews, and much more, and we’re always welcoming new members. Learn more about Erica Vetsch and her books at www.ericavetsch.com . She can also be found on Facebook (@EricaVetschAuthor) and Instagram (@EricaVetsch).

Thank you, Erica, for sharing this book with my blog readers and me. I so enjoyed the first two books so much, and this one is at the top of my to-be-read pile.

Readers, here are links to the book.

Leave a comment for a chance to win a free copy of the book on this blog. You must follow these instructions to be in the drawing. Please tell us where you live, at least the state or territory or country if outside . (Comments containing links may be subject to removal by blog owner.)

Can't wait to read this. It looks so good!
Abigail in VA

Thank you for the interview with Erica Vetsch. Enjoyed learning more about the author and "THE INDEBTED EARL" which is already on my TBR list. I can't wait for the opportunity to read this fabulous sounding book. Love the cover!

Shared and hoping to be the very fortunate one selected. Thank you for the chance!
Kay Garrett from Mountain View, AR
2clowns at arkansas dot net

Don’t enter me, but just wanted to say how much I loved this book. Erica is a wonderful author. Blessings

The Indebted Earl sounds like an intriguing book with fascinating characters I would love to meet.


This is the only one I don’t have yet in this series. LOVE the covers on all of them!😍
Elly -Indiana-

Love the book covers and excerpt/review. Would love to read and review author's books and this book in print format. Love books like this. Look forward to getting to know the author and their books. Look forward to reading this book.
Crystal from Bruin, PA in USA
Hope I Win

Hi, Caryl! Thanks for being such a loyal reader! <3

Hi, Abigail! I hope you enjoy the story when you get a chance to read it!

Hi, Kay! Thanks so much for sharing and spreading the word about The Indebted Earl!

Hi, Lucy! Thanks so much for stopping by and saying howdy! :)

Hi, Sandy! I hope you get a chance to read the story someday! :)

Hi, Elly! Thanks for reading and commenting. If you don't already know, Cilla's story is told in the Joy to the World Regency Christmas collection available from Kregel now! :)

Hi, Crystal, there are so many opportunities to read and review books for authors, especially if you have a blog! I recommend I Read With Audra publicity tours, JustReads, NetGalley, and checking publishers' websites to see if they have review crews! :)

I absolutely adore Regency novels, and yours are some of my favorites, Erica! I'm so happy that more are coming in the future!

I loved the first two books in this series so reading The Indebted Earl is a must. I also liked Erica's western/cowboy books. Thanks for the interview with Erica and the giveaway.

The Indebted Earl sounds wonderful! I am so looking forward to reading it!! Thank you for the chance to win a copy!!!

I've not read your other books, but I am interested.
-Melissa M. from TN

I am from North Carolina and really enjoyed reading the first two in this series. Regency books are always favorites of mine.