I've known Wanda online and at ACFW conferences for several years. We are both published by the same publisher, too. You're going to love getting to know her. 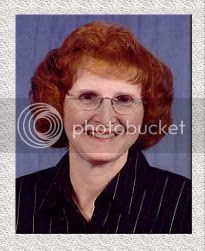 You received wonderful recognition last year. Tell us about it.

I learned ventriloquism when my husband and I first became involved in a puppet ministry over twenty years ago. I bought a book on the subject, practiced every day in front of a mirror, and six months later I was talking for two.

My daughters and I started the puppet ministry in the church we attended when they were teenagers. I wrote the scripts. When did you first discover that you were a writer?

When I wrote a poem to go with a picture of a moth I had drawn in the second grade. My teacher was more impressed with the poem than the picture, and from that moment on I began writing poems and short stories.

I enjoy reading historical novels, as well as mystery, and suspense, and I always enjoy a bit of romance.

I have written several romance novels for Heartsong Presents, as well as some novellas that have been included in collections with other authors. More recently I began writing women’s fiction novels, and I’ve also written an Amish devotional, entitled The Simple Life. This spring, I will have an Amish cookbook published, as well as a series of children’s books with Amish characters that will come out in July.

I can hardly wait to get the cookbook. How do you keep your sanity in our run, run, run world?

I try to keep my focus on God, asking Him daily through prayer and my devotional reading to guide me and give me wisdom. I try to make some time to spend with my grandchildren every week, and I find that a simple thing like sitting on our patio glider, watching the birds and listening to the trickle of our backyard pond, helps me relax. I also enjoy riding on our son’s boat, which I do as often as possible during the summer months.

I keep a notebook full of names I’ve heard, or sometimes I use names from someone I know personally.

What is the accomplishment that you are most proud of beside your family?

Having my books being on the CBA bestseller’s list, because I know this is a sign that the books are being read and someone out there might have read something that could help them through a difficult time.

I'm sure you've received, as I have, letters from readers telling you how one of your books changed their lives. If you were an animal, which one would you be, and why?

I have never had a desire to be an animal, but I suppose if I had to choose, it would be miniature poodle dog, because they are so cute and lovable.

I like many foods, and I’m not sure I have a favorite, but a couple of things I really enjoy eating are crab, prime rib, and Southern fried chicken. 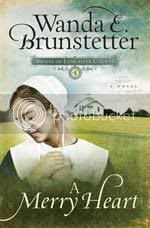 Wanda, you're making me hungry. Is it time for dinner yet? What would you like to tell us about the featured book?

A Merry Heart is a revised/expanded version of my first novel, which was originally published with Heartsong Presents. It was later put into a collection with three of my other Amish novels, and that book was entitled Lancaster Brides. The book has since gone out of print, so my publisher asked me to revise and expand by 20,000 words, each of those four book, which were released as separate full-length women’s fiction novels in a series entitled The Brides of Lancaster County. A Merry Heart is about Miriam Stoltzfus, an Amish schoolteacher who was jilted by her first boyfriend and who is now struggling with a bitter spirit. Amos Hilty, a widowed Amish man, wants to court Miriam, but she’s certain he only wants a mother for his daughter and a wife for convenience sake. Miriam’s heart warms to a more interesting friendship with Nick McCormick, an English newspaper reporter, as he’s easy to talk to and makes her smile. Miriam knows she needs to let go of her bitter spirit and surrender her will to God, but can she do that within her own community, or will Miriam leave the Amish faith and find what she longs for in the outside world?

Wanda, thank you for spending this time with us. We'll be on the lookout for your books. I've seen them all over the place, even in Walmart.

Thanks for this info Wanda and Lena. I even have your HP book about a ventriloquist, Wanda! Hope I win this one. rose

Thanks for the great interview.

Thanks as well to Wanda for revealing through her work that the Amish are more than just a tourist attraction or some sort of living angels.

As Betty Goodman put it some years ago, 'Their lives may be simple, but the people are not'.

This is too weird! I just put this on my to be read list. I LOVE LOVE LOVE books on the Amish and have read Wanda's other books but not her Lancaster Bride series.

I'd love to win an autographed copy.

I've read many of Wanda's books, but not this one.

Great interview, Wanda! Thanks, Lena, for bringing it to us.

I have your books wishlisted on paperbackswap.com, but I'd love to win an autographed copy!

I really enjoyed reading your interview. :-)

I really enjoy getting to know authors through your interviews, Lena.

Wanda, I love books with an Amish setting, and the Lancaster Bride series is on my reading list. Thanks for doing the interview.

Great interview! Sounds like a wonderful book to read!

Thanks, ladies. I enjoyed reading your comments, and I hope whoever reads "A Merry Heart" or any of my Amish novels, gets a better understanding of the Amish way of life. -- Wanda