Today, we're interviewing the author of an end-times novel.

Craig, welcome to my blog. Tell us how much of yourself you write into your characters.

Probably more than I realize. I believe there’s really no such thing as pure fiction, as all creative writing contains a seed of truth from the author’s own life experiences and personal perspectives, whether consciously or not. For example, writing my first novel Day Omega was a great emotional and psychological catharsis, as it was as a way to relieve my anger, sorrow, grief, and frustration after my nine-year-old stepson died in a yard accident in 1994. These emotions show up loud and clear in various sections of the story.

Friends, family, acquaintances—and even pets—have also been modeled into various characters, as I think they give the mind’s eye something real to extrapolate from. And this lends an air of authenticity to the entire work.

This is a loaded question because what some people would call quirky, I consider normal. Even my wife Sue tells friends that I “see the world differently than they do,” which I take as a great compliment. I think all creative persons have been blessed/cursed with this trait! I say blessed/cursed because creative persons were probably the one picked on, called names, considered weird, and were perhaps unpopular in school. But while the “normal” students have become “normal” adults, we have put our “differentness” to positive use. So being quirky has paid off.

When, in my pre-teen years, I would sit at my desk in my bedroom, doors closed, and write just because I enjoyed it. I suppose it is like those who fortuitously picked up a musical instrument, paintbrush, or calculator—God gifted us all with unique talents and interests. I was also encouraged by high school teachers and college professors who realized my talent and spurred me onward, although it took me several more years to fully realize this God-given talent and put it to use.

I’ve always enjoyed a balance between fact and fiction/humor and drama. I remember when I was young and enjoyed reading through an encyclopedia—I really learned a lot about the world doing that, and then being entertained by the idiocy of Mad Magazine. I love Mark Twain’s humor and cynicism, Steven King and Dean Koonz’s macabre suspense, and political writers such as the late Molly Ivens, John Dean, and others like them. I am especially fascinated by history and biographies, as it is educational to see why/how an event occurred and its ramifications, as well as learning how successful people “made it.”

Not to brag, but I think that’s why people I meet consider me smart and perceptive. Maybe they’re right, but I got that way from a well-rounded interest from various literary sources, including reading daily newspapers and periodicals.

Day Omega is my first full-blown book, but I wrote a short story that was published a few years ago. Also a booklet on the history of Indian art, a master’s degree thesis, blogs and articles on various subjects, and advertising copy. Again, I think that my writing versatility stems from my eclectic reading list.

Writing, writing, writing! After the nightmare Sue and I went through of losing her only child, it seemed that many times we were dangling by the last very thin, very frayed thread. That hopelessness was compounded when we each lost our good-paying jobs due to outsourcing, and the subsequent financial problems that resulted. Sue got pregnant, but our joy was dashed when she suffered a miscarriage; a few years later her father fell ill and died, we’re now taking care of her elderly mother. These among the stresses of daily living. During these precipitous times, manipulating fictional characters and providing their thoughts, motivations, and actions seemed like the only control I had in my own life. Through the grace of God, we not only survived these ordeals, but are better people for having gone through the fire.

Various sources, depending on their nationalities, backgrounds, age, etc. This is one area of characterization I really don’t fret about. Most of the time, I use “average sounding” appellations because one of my pet peeves in reading is a name that takes me out of the realm of believability because the author tries to be cute. I don’t think the name should distract from the story.

Hands down, without a doubt, that Sue said “yes” when I asked her to marry me! She is the love of my life, my best friend, and I thank God every day He put us together! Though we have been through too many difficulties for one lifetime, we have thrived and strived to become better, more altruistic people. And I know, without a doubt, I am a much better person than I was before we met.

An African grey parrot, definitely one of God’s most awesome creations. Leading avian researchers are discovering that these magnificent medium-sized birds have the cognitive abilities and emotional capacity of five-year old humans, and may be smarter than dolphins and primates. My wife and I are owned by two, and they are amazingly entertaining as they talk in meaningful phrases (“Father give me a cookie”, for example), dance, sing along with their favorite musicians, count, learn colors, mimic various sounds, and keep us laughing, comforted and joyful. I would love to be one, even for a day, to see what really goes on in those feathered covered birdbrains of theirs!

Please don’t be envious, but I gained a whopping eight pounds on my 6 foot one, 150-pound frame since graduating from high school, way back in 1972. Eating is not one of my big thrills in life!

Honestly, no roadblocks. As I mentioned before, Christian fiction writing has been therapeutic, so the last thing I want to do is make it a chore and something I feel I have to do. I have written too many other projects set to deadlines, formats, and specific subject matter, so this is my “fun time” when I can let my hair down and not be constrained by certain rules or rigid styles. I learned to trust God and put it into his Hands. He will give me the story, plots, characters, publisher, editors, as needed—in His time. This has been the most wonderful, unexpected ride—one that has really made me a better Christian. One that I believe God wants me to enjoy and carry out His message, not one to worry or stew about—that’s what real life is for!

Go with you instincts—what’s in your heart and mind—about something you know or are passionate about, and just start writing. Don’t worry about grammatical errors, sentence structure, or how you’re ever going to fill the many blank pages between the book covers—that’s far too frustrating early on. Computers keyboards come with “Insert” and “Delete” keys, and you can use these later at your (or your editor’s) discretion. And if you are writing to make money, go into another profession. 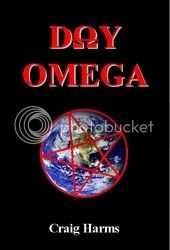 I've often told people who come to me to see about coming a writer not to quit their day job before they can make a living at the writing. What would you like to tell us about the featured book?

Day Omega works on several levels. What began as a fictional account of the end-times became a story about a weary, angry, pessimistic man’s newfound faith, his redemption and salvation. And, ultimately, a warning for readers to question the messages delivered by politicians and the media’s complicity in their motives. From the first word, to the final punctuation mark, to opening the shipping box with the manuscript in book form, this has been a miraculous journey that has taught me much about myself, my purpose, my faith—and came in a time when I really needed direction in my life. When I penned the first hand-written words several years ago in a spiral bound notebook, I had no intentions of writing a book, but as the characters very slowly developed, the parallel plotlines emerged, and the story grew in length and breadth, I had the feeling I may be on to something. I hope you will agree.

Craig, thank you for spending this time with us.

Readers, check out his site. Leave a comment for a chance to win a free copy of the book.

Fascinating interview! Thanks, Lena, and thanks, Craig! Count me in for the drawing, please.

Hello! An interesting man and interview of him! I totally agree with him about the people considered quirky or offbeat. They tend to be the most creative people. Thanks,Cindi
jchoppes[at]hotmail[dot]com

I do want to read this book and will likely buy it someday... but winning it here would sure be better! Count me in!
:)

Thanks Lena for the interview and for the posted comments, they are deeply appreciated!

I should mention I promised God that if the book should get published, I'd give all the profits to charity. The first donation went to Camp Callahan, a local summer retreat for kids and adults with physical and mental disabilities. I know Jamey is looking down, smiling wide. Thanks everyone for your support!

Enjoyed the interview. Enter me please.

Really great interview...I would love to see an African grey parrot! Thanks for the chance to win!

the book seems really interesting! hope i'll win! please count me in! thanks a lot! yanyan_140[at]yahoo[dot]comnybxhp

An interesting man! Thank you for the interview -- I have subscribed to your blog so I don't miss your posts. Thank you. Now I'm on my way to Craig's site...

Sounds like an interesting book ~ I enjoyed the interview!
Please enter me in the drawing.

This sounds like an interesting read. Count me in.