I'm breaking into our regular schedule of author interviews to write about the ACFW national conference. Although many of my readers are just that--people who love to read books, and authors are glad they are--some of you are also aspiring or published authors.

I cannot say enough about the value of attending conferences. I joined ACRW, which later became ACFW, in the spring of 2000, soon after it was established. That year, we had a regional conference in the Houston area. That was my first taste of a writer's conference. Here's a picture of (clockwise from left end of back row) DiAnn Mills, Lynn Coleman who was then president of ACRW, me, Kathleen Y'Barbo, and Pamela Griffin. Pamela is a member of the critique group that meets in my home, but this was the first time I met the other women face to face. What a lot of fun we had. Several other people also attended this conference. 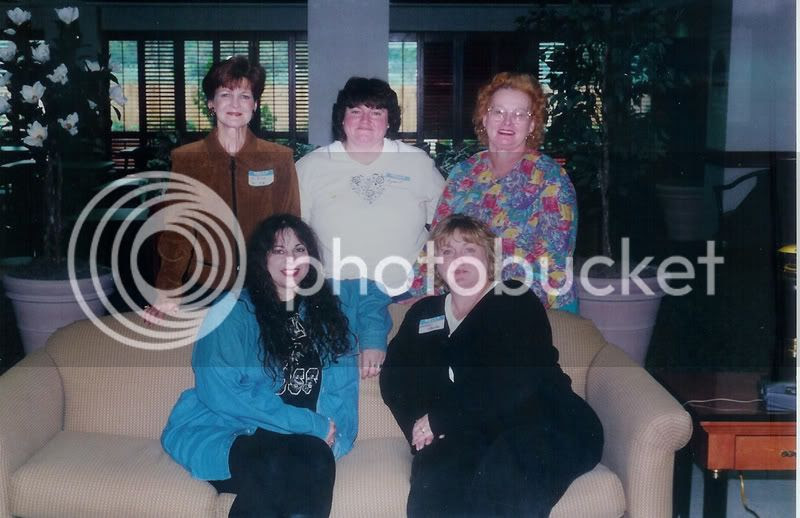 The next year, we also had a regional conference in Houston. Once again, I met more people and learned so much about the business of being an author.


At the first national conference in Kansas City the next year, I felt as if I were attending a large family reunion. I'd met most of these people online, but this was the first time face to face. At this conference, I learned a lot more about writing well, but I also realized that editors are people who can also be our friends.


If you want to know the dangers of going into a tavern (in the hotel) for a soft drink with ice during a session, email me privately.

The next conference was at Houston. I really got to know Joyce Hart at that conference. We became friends, and a couple of years later, she became my agent. 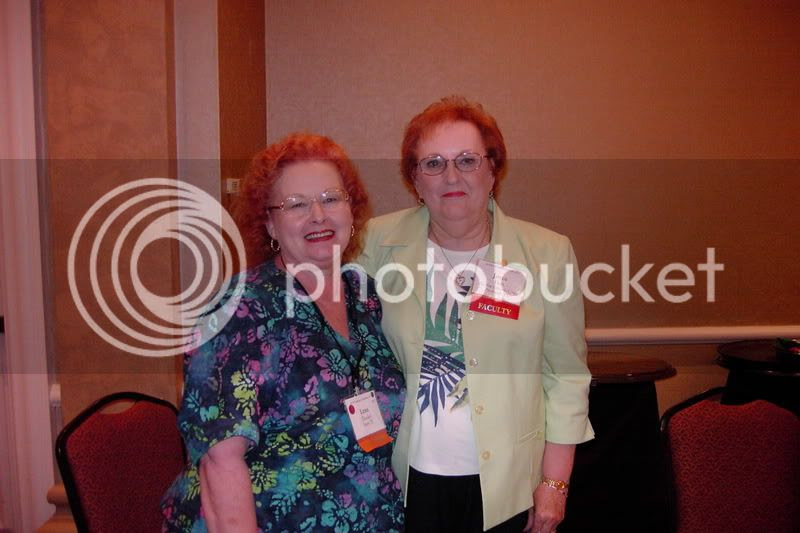 One of my all-time favorite books is Redeeming Love by Francine Rivers. I never thought I'd ever meet her, but she was the main speaker at the Denver conference. I not only met her, but got to visit with her in the lobby a couple of times. 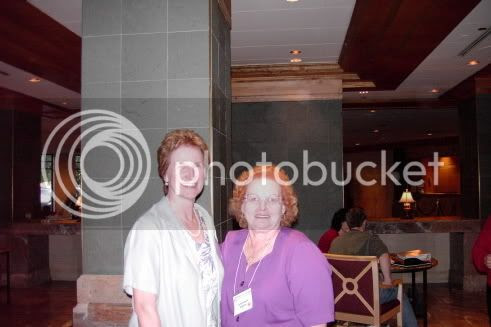 At the Denver conference, we were also blessed with a teaching on Male POV by Randy Ingermanson. It was worth every penny the conference cost us. This was also the year that the conference included Late Night Chats. I was privileged to have one on "Getting the Words Right." 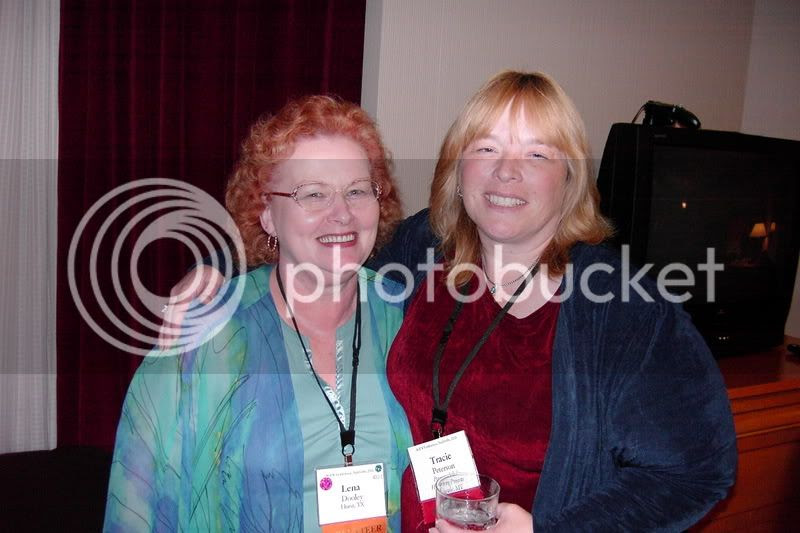 Here I am at the Nashville conference with one of my editors, Tracie Peterson. She and her husband Jim have become good friends who I cherish. At this conference, our book signing was bigger. We also learned what a "goldfish moment" is. I had a Late Night Chat on "Building Your Vocabulary."

The 2006 conference was in Dallas. Our faculty had grown, with many more excellent workshops. More new friends, a better book signing, lots more to learn. 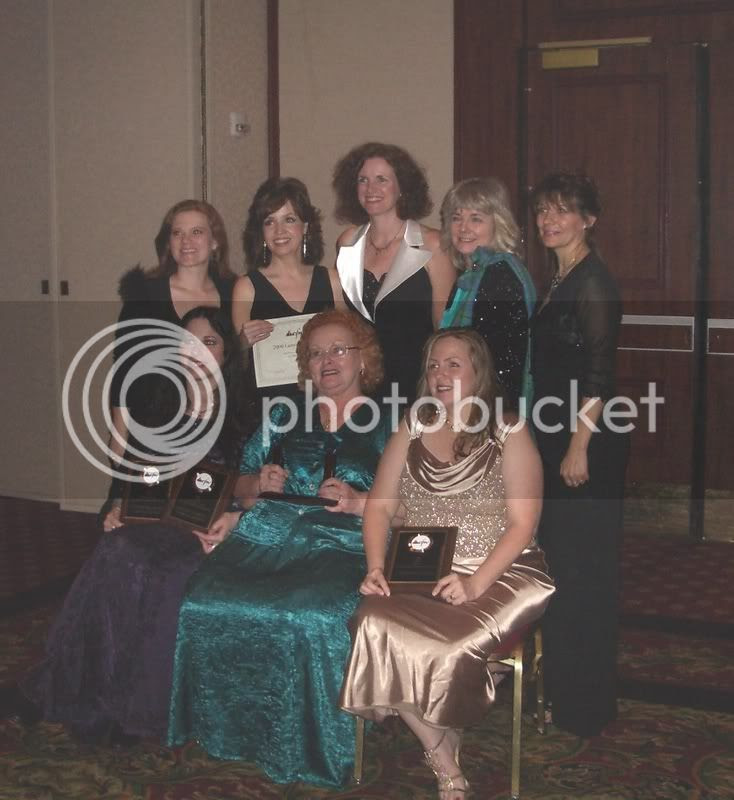 Of course, the highlight for me was receiving the Mentor of the Year award. In this picture are a few of the people I've mentored. (Clockwise starting at the left end of the back row) Khristy Hullett, Lynne Gentry, Jane Thornton, Margo Carmichael, Pamela James, Cheryl Wyatt, me, and Pamela Griffin. God has really blessed me with these people and the others He's brought to my home. 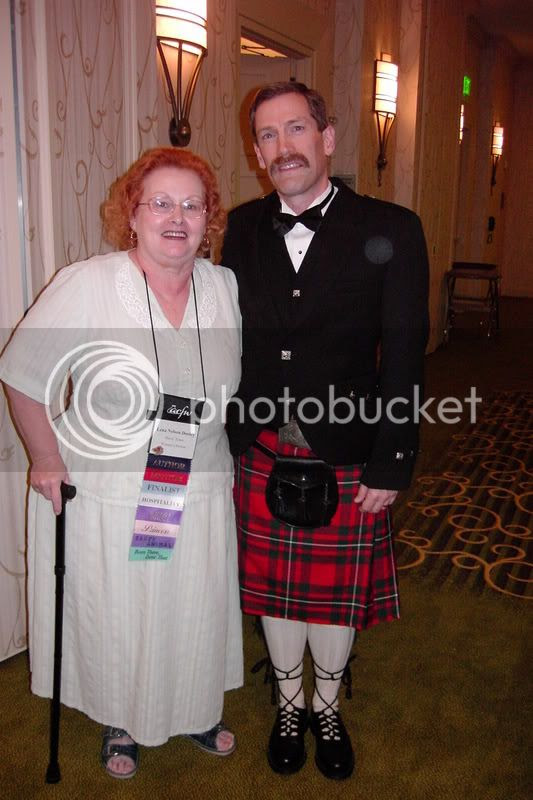 For those of you who didn't attend the 2007 conference in Dallas, here's a picture of Chip MacGregor with me on the night of the banquet. Thank you, Chip.

I attended this conference with my leg in a brace and me in a wheelchair most of the time. I do not recommend this as a way to attend a conference, but I didn't want to miss it. The conference was worth all I had to go through to attend.

Meeting and hearing from James Scott Bell, who hung out with us some of the time. The expanded workshops and sessions, the even larger and better-attended public book signing, and the worship.

Oh, the worship at the conferences will take you to very throne of God and lift you up into His arms. Worship, teachings, encouragement, spending time with old and new friends.

The boost to your writing career through all these connections makes the conference worth every penny you spend. I budget for it all year, making sure I have money in savings so I can go.

And this year, we'll be meeting in Minneapolis, with our book signing at the Mall of America. And the lineup of editors, agents, and faculty is awesome.

Check out all the details by going to: www.acfw.com
Posted by Lena Nelson Dooley at 3:06 AM

LOL, Kath! Amazing, isn't it? When *I* go back and look at my pictures through the years of conferences, I cringe at the years and age increase that are evident on my face.

And Lena, I'm surprised you didn't mention the fact that you're such a great hugger! One of the reasons I attend these conferences is to connect with online friends and other friends I haven't seen in a year. Hugs are the best and you get an armfull of them (pun intended). Lena gives fantastic hugs!

Sounds like a wonderful time! The Mall of America?! I have always wanted to visit there. Cindi

Lena,
Thank you so much for sharing your conference memories with us! It was interesting and entertaining!

The more I read about the ACFW conference the more excited I get!! I cannot wait!!
Blessings,
Patti Moore
(from Georgia)