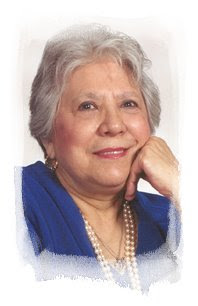 Welcome to my blog, Elena. Tell us how much of yourself you write into your characters.

Actually, I do not to write about myself in any my characters, I prefer to use a combination of people I know, have met, or have seen in one place or another.

Jumping off a moving train. Working as a secretary in the State House, a secretary and I were supposed to meet our boss and other secretaries on a train that was going out to another city to visit one of our sick employees. The thing was, we had the tickets for everyone, and as the train left the station, the others hadn't shown up. So as the train was moving out, we decided to do what our boss said and jump off the train to wait for the next one hoping the others would finally arrive by then. As the train pulled away we noticed that all the others had caught the end of the train and were moving forward to where we were supposed to be. They waved to us as we stood there on the railroad tracks watching them disappear from view. I should add that at the time we were both wearing dresses and high heels.

Probably when I was in Grammar School. I love to read books and go to the movies. It was the endings of stories and movies that inspired me to rewrite them so that they all ended happily. From that point on I continued to write short stories and short plays mostly for my own pleasure.

I love to read historical, mystery, romance, and science fiction novels. Nonfiction books about ancient civilizations, space travel, and the universe. I generally like well-written books that have a plot and a story to them.

At present I have ten books published all as ebooks and Kindle books with three in print. I have two series presently published. One is a four-book science fiction series that is not yet in print, but is due to be released in print this year. The second series is a three-book mystery series all of which have been released in print. Three other books are stand alones. One is based on a true story, the other two are science fiction/mystery novels

Lately, things have been chaotic, with my youngest daughter moving back home, my oldest daughter just graduating from law school, and my husband and I dealing with the deaths of family members in other states. Other than that…the world is still turning, the planet is still in its orbit and the sun will shine again.

That's the hard part. Sometimes I take the names of place and things, mix them all up and see what I come out with. Other times, certain names seem to be just the right ones for the characters in the stories.

I suppose as a mother I can only say the way my four children have turned out. What better accomplishment than to have four beautiful children, who are intelligent, talented, and creative. And a granddaughter as well who has the same attributes. As to my personal accomplishments — that I am a Software Engineer turned author and have ten published books to my credit as well as the love of a wonderful supportive husband. What more can one ask for?

I haven't the foggiest notion. Since I can't think of who I might be, then I guess I wouldn't exist…as an animal that is.

I have lots of favorite foods. Among them are: Lasagna, meatballs, broiled zucchini, steak, stuffed squash, boiled potatoes mixed with olive oil and salt.

Time…time is always a problem. Getting time to myself to write uninterrupted is the greatest roadblock. I haven't really overcome it, I deal with it. When I sit down to write now, my family understands that they have to let me be until I stop for a break or for something to drink.

Be persistent. Talent alone won't make the grade. If you believe in your work, others will as well. Don't despair if you get rejection upon rejection. Keep at it until someone finally realizes what you have is worth publishing. Trying to get into the big traditional publishing houses is difficult. With a few exceptions, most of them want manuscripts submitted by an Agent, they don't want to have to go through a slush pile to find the next JK Rollins. There is always the small press publishing companies who are more easily accessible to new authors. But they too, only want the best.

The House On The Bluff - ISBN# 1-59431-363-6 is published by Cambridge Books, an imprint of Write Words, Inc., Cambridge, MD, and is the first book in the Legacy Series. Books 2 and 3 in the series are entitled, The Gatekeeper's Realm and Adams Point respectively.

The House On The Bluff: Centuries before Leif, son of Eric the Red, roved the seas along the Atlantic coast of the Americas, the first White Man to set foot on the North American Continent, and…"Long before the Magna Carter was signed, or Columbus set sail, or the Mayflower left England the House On the Bluff existed waiting for its rightful owner. More than one intrepid soul had entered the house never to be seen again…"

The last voice heard from the house was an 18th Century ancestor's blood-curdling screams in the dark of night, but no one ever saw or heard from that person again. What was it about the "house" that made people tremble? Why had no one ventured near it since 1789; why had no one dared? Had it not been there for centuries, standing tall ... empty...beckoning?

Abigail Adams Pierce could not envision that the information she stumbled on would take her on a hair-raising journey she would never forget. A journey that once started would have no turning back, even at the risk of losing her life in the physical sense and being trapped within the spiritual realm, which had invaded the Pierce House. And nothing, in her wildest imagination, could have prepared her for the effect her discovery would have on her life from that moment on. This was her family's legacy - handed down from the 11th Century - to the descendant who dared to enter in spite of its warnings. To the day she entered her ancestral home, with its promise of terror or fulfillment, The House On The Bluff maintained its enchantment and its ageless elegance, standing as a silent sentinel waiting for the one long destined to enter who could shatter its secrets.

I have two websites, http://elenadb.home.comcast.net/ and http://www.sarahslanding.com/
From there you can read excerpts and reviews of all my books and my email address. I also have a myspace address and a blog. My books are available from: http://www.amazon.com/, http://www.booksurge.com/, http://www.cambridgebooks.us/, http://www.ebooksonthe.net/, and at your favorite bookstore.

Thank you, Elena, for spending this time with us.

Readers, leave a comment for a chance to win a free copy of the book.
Posted by Lena Nelson Dooley at 8:36 AM

What a wonderful interview! I am so thrilled to be able to have gotten a peek inside the mind of this exceptional author! Thank you!

This is really my kind of book!
This author is quite intriguing, also. Please enter me in your drawing. Many thanks, Cindi
jchoppes[at]hotmail[dot]com

Hi, Jodi, Abi, and WindyCindy. Thank you for reading my interview. I am pleased that you found my interview interesting. I often wondered how readers would react to what I write. Thank you again.

Please.....I would love to win a free book, All these authors are so great and so are you. May God bless

Sounds very intriguing. A great title, and fun to meet the author in your interview.

Please count me in :)

This book sounds intriguing - I would love to win it.

Wow, jumping off a moving train in a dress and high heels! martha(at)lclink(dot)com

This author and book sounds wonderful... can't wait to explore her websites.... thanks for the interview and the opportunity to be included in the drawing... GOD's blessing to all...

Now I just have to say Elena sounds like she has LIVED! Jumping off a train! Whoa! Anyway, this looks really interesting!

the book sounds a little spooky but very exciting. I love that story about jumping off the train. I guess it was a bit of a walk, too, with those heels.

Lena, plaese enter me in the drawing. I have been wanting to read and review a book by Elena for some time now. THanks.

This sounds like a thrilling book. I'm ready for a good page turner. Thank you for the entry.