I've really been interested in this book since I first heard about it. 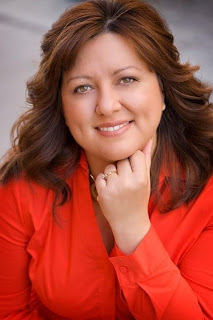 How did The Swiss Courier come about?
Mike: Five or six years ago, Tricia and I met online through the Writer’s View, a place where Christian writers, editors, and agents can gather online to bat around ideas and what’s happening out there. I had just finished writing my first novel, By the Sword, which is a Mideast thriller set in modern times about how Islamic elements in Iran want to take Islam back to its roots, which is conversion by the sword.

I was getting rejection after rejection for By the Sword, and Tricia helped point out why. I wrote and rewrote, and I eventually got By the Sword sold and published with Broadman and Holman in 2006. After that experience, Tricia and I started kicking around some ideas about a World War II novel, which was up my alley since I’ve always thought of myself as a Second World War buff.

Tricia: I think our conversation really took off when I met Mike and his lovely wife, Nicole, at a large book convention. Once we started talking about World War II, it was clear we both loved this time in history. I was also excited because Nicole is Swiss. (Her accent is lovely!) I can't think of many novels that have been written about WWII from a Swiss character. The ideas flowed from there!

Tell us about the book’s cover and what makes it unique.

Tricia: Our publisher actually shot this cover for us with a real model. It took our breath away because the model looked exactly like we picture Gabi. I also loved that they really followed our direction about the tone we wanted to see and even the style of clothes she would have worn.

Mike: I think it’s an arresting image, and it inspired us to do a “book trailer” for The Swiss Courier that is like a Hollywood movie trailer. Here’s the link: http://www.youtube.com/watch?v=2cNPrAArNaQ

Please explain and differentiate between what’s fact and fiction in the book.

Mike: Much about The Swiss Courier is true, which begins with a faithful recounting of the assassination attempt on Adolf Hitler’s life on July 20, 1944. At that time, Werner Heisenberg, a

German winner of the Nobel Prize, was leading the efforts to build the world’s first atomic bomb. American and British pilots were landing their damaged planes in Dübendorf, Switzerland, rather than ditching in Germany, where they stood a good chance of being shot on sight. More than 300 Allied pilots were interned “for the duration” of the war in the Swiss Alpine villages of Davos and Adelboden. Allen Dulles established the OSS—the forerunner of the CIA—in the capital of Switzerland, Bern, in 1943, to start running a spy network. Switzerland did close its borders to Jews and other refugees because “the boat is full.” Switzerland did allow German trains to pass through Switzerland while going back and forth from Germany to Italy.

During research, I read the definitive biography of Werner Heisenberg—Heisenberg’s War: The Secret History of the German Atomic Bomb by Thomas Powers. A couple of books about American and British pilots interned in Switzerland during the war (Shot from the Sky and Refuge from the Reich) were especially helpful. World War II novels dealing with the Switzerland and the OSS were beneficial, such as The Swiss Account by popular novelist Paul Erdman. Once you have this information in your head, you create these characters and let things play out as you envision everything happening. By the end of the novel, I really believed that Gabi Mueller and Eric Hofstadler lived!

Tricia: To balance that, I usually read a lot of “true” stories. I've written about spies in

my Chronicle of the Spanish Civil War series, and I devoured as many “autobiographical” accounts as I could. I'm thankful Mike focused on the technical details so I could play with motivations, fears, and inward battles that these people faced. The people, of course, our fictional, but what they faced—externally and internally—is true!

Mike: Joseph Engel, like Gabi Mueller, Eric Hofstadler, and the others, were figments of our imaginations. But they could have existed, and that is where the fun comes in.

How much research did you have to do for this book?
Mike: My “research” started years before I ever knew I'd need it. My interest in Switzerland stems from being married to a Swiss native, Nicole, for 30 years, and our more than two dozen trips to her home country. Back in the early 1980s, before our two children arrived, we lived one year in Geneva and six months in Zurich so that I could experience Swiss culture. I did a variety of things, from working in a sporting goods shop to teaching tennis at a large indoor club. During that time, I read several books about Switzerland’s role during World War II.

Tricia: I was thrilled when I discovered when Mike already knew so much about the time period we were writing. I filled in bits and pieces here and there, but I can say that between the both of us, hundreds of hours were spent “getting it right.”

What are some of the most interesting things you found about this time period that you weren’t able to use in the story?

Tricia: I would have loved to dig more into the Confessing Church and some of their important leaders who were sent to concentration camps. Some survived, all did not.

A select few of the Confessing Church risked their lives to help Jews hiding illegally in Berlin during the war. A hat would be passed around at the end of secret meetings into which the congregation would donate identity cards and passbooks. Maybe I'll write about this some day!

What inspired and surprised you while you were writing the book?
Tricia: Through research, we learned that the Germans, under Werner Heisenberg, were working on nuclear fission and developing the world’s first atomic weapon. I was surprised the Nazi's were so close! It made me thankful that that didn't happen. I was always inspired by all the brave men and women—many of which may never be acknowledged for their work.

What do you hope the reader takes away from the story?

Tricia: I hope they are swept away in a story with characters they fall along with—and in that story get a glimpse of God at work in lives.

Mike: An appreciation for what those who stood up against the Nazi regime. Living in a police state where all it took was for a jealous neighbor to denounce you to the Gestapo, and you were in for a heap of hurt—and probably a painful death.

What is the next project you’re working on?
Tricia: I’m currently working more historical novels: Love Finds You in Lonesome Prairie, Montana (which I’m co-writing with Ocieanna Fleiss) and Songbird Under a German Sky (another WWII novel). Also Remembering You (a contemporary/WWII novel).

Mike: I’m laying fallow for the moment, but Tricia and I have been kicking around a sequel to The Swiss Courier. It has to do with the Mona Lisa painting during the liberation of Paris in August 1944.

Tricia, sometime I'll tell you about my aunt who was an army nurse in Germany when all this was going on. She has some interesting stories and pictures. What do you do when you have to get away from the story for a while?
Tricia: I take a bath or a nap!

Mike: And I go play three sets of doubles with my tennis buddies.

Thank you, Tricia and Mike, for spending this time with us.

Readers, Leave a comment for a chance to win a free copy of the book.

The only notification you’ll receive is the winner post on this blog. So be sure to check back a week from Saturday to see if you won. You will have 6 weeks from the posting of the winners to claim your book.
If you’re reading this on Feedblitz, Facebook, or Amazon, please come to the blog to leave your comment. Here’s a link.

http://lenanelsondooley.blogspot.com/
Posted by Lena Nelson Dooley at 3:51 AM

Please enter me. I would love to win The swiss Courier.
tarenn98[at]yahoo[com]

It was a great interview.
I'd love to win this book.
Please, enter me.

this book looks very good. Please enter me for the drawing.

I'd love to be included in this book giveaway . Thanks

I would love to be entered in your draw for this amazing book. Thanks. wandanamgreb(at)gmail(dot)com

Please enter me.....sounds like a book I would love to read. Thanks!
jackie.smith(at)dishmail(dot)net

Thanks everyone for stopping by! Thank you, Lena, for hosting Mike and I!

I love her books. Thanks for the chance.

I've heard wonderful things about this book. Please enter my name. Thank you.

I am really interested in reading this book- would love to win it!

I love to read books that center around WWII. Please count me in for this drawing! THanks, Lena!

Thank you for the opportunity to win this book!

This does sound interesting. Well-researched and a fascinating topic.

Enjoyed the interview! Would love to be entered in the drawing.

Please enter me. This sounds like a book I would love to read!

Sounds like a great read! And I love that cover too!

Would love to read this fabulous book..thanks for the opportunity.

Awesome interview. please enter me. I would love to win The Swiss Courier! Esther

This sounds like the most fascinating book. Please enter me!!! Thanks

I'd love a chance to win The Swiss Courier, please include me in the drawing. Thanks!

Wow - lots of comments on this book. I'm always interested in books written by two authors. I would like to have a co-author for my book. Also, it is interesting that this book is based on a real story. Please enter me.
Deborah M.
debbiejeanm[at]gmail[dot]com

This sounds like a great read!
dancealert at aol dot com

I really like the sound of this book. Thank you for the entry.

It sounds great!! Please enter me in your drawing. ~Abby

This book looks so interesting!! Thanks for the chance to win.

I love all of tricia's other books, so would love to win!

I would like to be entered for this book. Thanks!

As the co-author of "The Swiss Courier," it was great to see all the enthusiasm for our World War II-era thriller. Readers have been telling us that we've been keeping them up late to finish the last 50 pages. No one has been able to figure out how "The Swiss Courier" ends yet, so there are some great surprises. Thanks again. Mike Yorkey