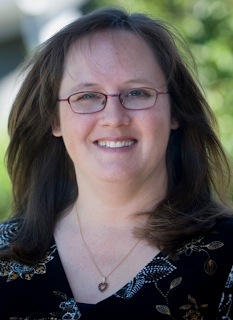 Welcome, Sandi. Tell us how much of yourself you write into your characters.

There's a piece of myself in all my characters. Even the bad guys. My bad guy in this story (the grandfather) is a bit insane and arrogant. E-hem. I'm ashamed to say I see a little of myself in him as well! Aaack! Better work on that. I also see myself in David. He's hot tempered, but has a passion to please God. Yep, that's me. Then there's Alethea. She's carefree and foolish, but at the same time shrewd, especially when it comes to protecting her own hide. Yes, that's me, too. :-)

One morning I climbed out of bed to take my two-year-old to preschool. This took place when we lived in Holland, by the way. So, I fed her, got her dressed and loaded her on the bike (we rode bikes, not cars out there). I dropped her off, and right across the street was the grocery store. There were some items I needed, so I decided to head on over there. Because it was so close, I decided to walk.

I crossed the street, pushing my bike, and then I went into the store. As I walked along, a man looked at me, looked away, then looked at me again. Surely, my hair and clothes weren't in that bad of shape. Yes, I'd just crawled out of bed, or felt like I had, but there was no call for anyone to take extra notice—or so I thought. Another couple walked by and gave me a strange look. Well, maybe I did look pretty bad. Finally, one woman's eyes darted downward and rested on me, or whatever it was she saw, so I also looked down. To my surprise, I was still pushing my bike! I'd walked my bike into the grocery store.

I chuckled and managed to get the words out in Dutch, "I'm not awake yet." I think it was my first official joke in Dutch. The woman laughed, so it must have worked. Well, I managed to get the bike turned around and parked it outside where it belonged. After that, I was wide awake.

While in Holland, before I knew the language, I needed an "out." A way to express myself, since I couldn't in the everyday world. So, I started writing. I always wrote as a kid, but I never planned on becoming a writer.

We had a Dutch exchange student when my daughters were in high school. Tell us the range of the kinds of books you enjoy reading.

Historicals and historical romance. Not much of a range, I guess. It's also what I write.

I wrote a historical romance about a half-breed Cheyenne warrior and a Dutch pioneer woman. I became intrigued with the Sand Creek Massacre and the fact that I grew up in Colorado and never knew about this horrific "holocaust." The idea of a Native American Christian coming face-to-face with white men who claimed to be Christians as they killed innocent people from his tribe, including children (all true according to history, by the way), really challenged me, so I had to write about it.

Not many houses want Native American stories, so that one isn't published.

The business is always changing. It's time may come. There were several books with Native American main characters that came out this year. How do you keep your sanity in our run, run, run world?

Good question. Yes, life in America is ten times faster than it was in Holland. It leaves me breathless. So, we say "no" to a lot of things. We have a family dinner with the kids and simply hide out at home.

I do baby name searches online. Usually it's a name that either needs to be Dutch, Cheyenne, Greek, Latin, or Germanic. So, I look them up online and see what's out there; I also like to choose names with a meaning that "fits" their character. Other times they just come to me.

Writing related: That I finished THE MASTER'S WALL. This story has been in me for years. Now on to the next in the series, YAHSHUA'S BRIDGE.

A cat. So I can curl up and sleep all day.

Not knowing the craft. So, I learned it. My Native American story mentioned above was my "practice novel." It won first place in the 2005 West Virginia Novel Competition, so I don't think it turned out too bad.

Learn the craft! Get your hands on Dave King and Renni Browne's book Self-Editing for Fiction Writers. Or stop by my blog where Dave and other fabulous editors hang out, and learn about the craft: http://thebookdoctorbd.blogspot.com/.

Below is the book jacket description.

After watching Roman soldiers drag his parents away to their death, David, a young Hebrew, is sold and enslaved to serve at a villa outside of Rome. David trains to become a skilled fighter. He works hard to please his master and hopes to earn his freedom. However, an opportunity to escape tempts him with its whispering call. Freedom beckons, but invisible chains hold him captive to the master's granddaughter, an innocent girl with a fiery spirit. David vows to protect Alethea from his master, the murderous patriarch, and contrives a daring plan—sacrifice his own life to save hers.

David tried not to cry, tried not to breathe or make a sound as he crept along the dark street. Careful not to trip on the flat stones, he recalled how that morning he’d taken this same path, chasing friends between the alleys, pretending they were gladiators fighting at the Circus Maximus. Now again he followed the enemy. Only this enemy was real. There were three of them. And they had taken his parents.

Mamma. Abba. He wanted to shout out their names, to cry out to them.

He could still feel Mamma’s hand in his. Could feel her letting go as the soldiers pulled her away. Could feel her stola ripping as he clutched it. All he had left was the shredded fabric from her dress still in his hand. How empty his hand felt now that she was gone.

He made a fist. All he had in the world. Snatched away. And now their lives might depend on him. On what he would do at this moment.

A lot of emotion there. How can readers find you on the Internet?

Sandi, thank you for the interesting peek into your life and writing.

Leave a comment for a chance to win a free copy of the book. New information: Please tell us where you live, at least the state or territory. I’m trying to get a good idea of where the people live who leave comments on my blog. (Comments containing links may be subject to removal by blog owner.)

http://lenanelsondooley.blogspot.com/
Posted by Lena Nelson Dooley at 3:06 AM

I'm quite intrigued by the description of the story. Please enter me.

I love Indian food too! Thank you for the entry!

WOW! That first page alone has me gripped!

would love to win a copy of The Master's Wall. Please enter me and thank you.

Hiya, Sandi! Glad to see you here and learn a little more about you. I'm excited about your book. You don't have to enter me, Lena; just saying HI and best wishes. If you don't win this book, friends, I hope you'll buy a copy.

Sandi, you're alright in my book! Anyone who could pull off what you did in that store in Holland has got to have a sense of humor and appreciation of everyone else's crazy moments. I got a big laugh from that. Your book sounds like a marvelous read. I'm very fond of Biblical stories. Please enter me in your giveaway and I appreciate the chance to win this wonderful book. I sure hope I do!

Thank you for having me, Lena. It's so great to be here! It's also wonderful seeing new and familiar faces. :-)

I hope you get your Native American book published someday. I really like the sound of that one. Thank you for the opportunity to win a copy of The Master's Wall!

What a fascinating first page. Makes me want to weep with the child--then keep reading.

Thanks for the interview

Oh, I've been wanting to read this one for a while!

Lena, don't enter me. I have read the book and it is wonderful. So much history that I never knew about. I think everyone will enjoy it.

Please enter me. Thanks!

One of my fave. time periods for historical fic.

I have read The Master's Wall and it is worth the effort. Sandi knows how to write in a way that keeps you surging ahead to find out what happens. A great book.

would LOVE to read this fabulous novel...thanks for the opportunity :)

would LOVE to read this fabulous novel...thanks for the opportunity :)

Would love to be entered to win the book.

It's great to see so many folks drop by here! I can't wait to see who wins the book. Thank you so much for showing interest in my book. :-)

I loved your comment about taking the bike into the grocery store...I was waiting for something worse!! Glad it worked out!
Please include me!

I loved Sandi's comment that she even puts a bit of herself into her villain.

I would love to be entered for this. Thanks!

I'd love to read this!

Great interview and the book sounds like something very different and I would love to win it. ybutler@oppcatv.com

This book intrigues me to want to enter. Thank you for the chance to win.

Sounds like a great book! I would love to win a copy.