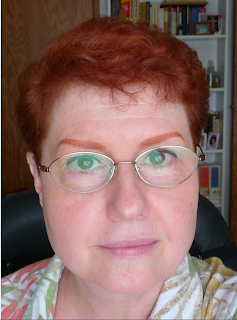 Welcome back, Joan. Tell us about your salvation experience.
I made a public profession of faith when I was 13, during a revival meeting at near . But I don’t remember a time when I didn’t have the complete assurance that Jesus loved me, and I loved Him right back.

I was incredibly blessed to grow up under the guidance of parents, grandparents, extended family, and a church congregation who truly knew and loved the Lord and lived out that faith in such a way that I claimed it for my own at an early age. I know not everyone has that experience, and it doesn’t matter how or when you come to know Jesus as long as you come. And I don’t claim to have always been faithful. I’ve had trials and temptations and given in to sin just as all of us have. But I’ve always considered myself to be truly blessed in the family and church I grew up in. They gave me a solid foundation on which to withstand the assault of the Adversary and always find my way home.

You’re planning a writing retreat where you can only have four other authors. Who would they be and why?
First, Lori Benton and Laura Frantz, who over the past few years have become my dear, dear sisters in Christ and fellow workers for His kingdom, and whose stories and craft I truly admire. I learn so much every time I read one of their books. Then two writers I’ve never met: W. Dale Cramer and Athol Dickson, both of whose ability to tell a mesmerizing story and convey deep emotion through spare language holds me in complete awe.

Do you have a speaking ministry? If so, tell us about that.
I haven’t actively pursued a speaking ministry for several years, but I’ve spoken to a number of groups in the past on history, writing, editing, and publishing. I love the interaction and am open to scheduling engagements. A list of potential topics is posted on my personal website on the Speaking Engagements page, and I’d be happy to talk with event organizers about specific subjects their group might be interested in.

What is the most embarrassing thing that has happened to you and how did you handle it?
My first radio interview, done live, and I didn’t handle it well. I was a new author and uncertain about how to prepare for a live interview. I sent a fact sheet about my book, but the interviewer obviously hadn’t read the book or the fact sheet and didn’t know much, if anything, about the Revolution, so we started off on the wrong foot. I didn’t do a good job of responding to her first question, which was kind of out in left field, and she shuffled me off the show pretty quickly. I prayed nobody I knew had tuned in and swore I’d never do a radio interview again!

Since then I’ve learned that if the question is off topic or you can’t answer it, you need to say something like, “That’s a very interesting question,” and then change the subject and answer the question you wanted the interviewer to ask. When I was invited to do more radio interviews some years later, I got up enough courage to say yes. This time I knew how to prepare, and since the interviewers had read my novels and loved them, it was like talking to good friends. The shows were also pre-recorded, so glitches could be removed before they aired, which raised my comfort level a lot.

People are always telling me that they’d like to write a book someday. I’m sure they do to you, too. What would you tell someone who came up to you and said that?
I have had that experience too, and I’ll bet a lot of us authors get that kind of response. I always try to be sympathetic and encouraging, but if I really said what I thought, it would be the following.

If you really want to write a book, then sit down in front of your computer or grab a pad of paper and pen and get started today. If you keep waiting for someday, it’ll never happen. If you’re really called to write, then you won’t be able to keep from doing it. And if you don’t do it, it’s because you don’t have a true interest or calling, so don’t pretend you’re actually going to do it. Go do something else you’re really passionate about!

But I’m too polite to be that blunt!

Tell us about the featured book.
One Holy Night is set in 1967, when the Vietnam War was tearing the country apart, slicing through generations and shattering families. Because of Japanese atrocities he witnessed as a Marine in the South Pacific during WWII, Frank McRae despises Asians. Now his wife, Maggie, is fighting her own battle against cancer, and his son, Mike, is a grunt in . When Mike falls in love with Thi Nhuong, a young Buddhist woman, and marries her in spite of his father’s objections, Frank disowns him. Then, as Christmas approaches, Frank’s world is torn apart, and he turns bitter, closing his heart to God and to his family.

But on this bleak Christmas Eve, God has in mind a miracle. As on that holy night so long ago, a baby will be born and laid in a manger—a baby who brings forgiveness, peace, and healing to a family that has suffered heart-wrenching loss.

Please give us the first page of the book.
November 19, 1966
Mike McRae dropped his battered duffle bag on the concrete floor and glanced through the bank of windows to where the wide-bodied army transport sat waiting on the snow-dusted tarmac. Waiting to take him and his buddies halfway around the world to war.

The name hung between him and his family as they gathered in the spare, unadorned military terminal, trying to pretend that this trip was nothing out of the ordinary. But it seemed to Mike almost as if he were gone already, that he had moved beyond the point where he could reach out to touch them. Their faces, loved and familiar, blurred before his eyes as though he looked at them through a mist.

His father cleared his throat before shoving a dog-eared, plain, tan paperback book into Mike’s hands. “Thought you might be able to use this sometime,” he said, his voice hoarse. “You and Julie used to like to sing some of these old songs when you were kids. Remember?”

Mike looked down at the book he held. It was his father’s old service hymnbook that he’d gotten as a young Marine at Sunday worship aboard a ship headed out to the South Pacific during World War II. Frank McRae wasn’t much of one to attend church, and the gift surprised Mike. Maybe spiritual things meant more to his father than he had thought.

Thank you for inviting me to join you, !

And thank you, Joan, for sharing this Christmas book with us. I love to read Christmas stories in October, November, and December.

Readers, here are links to the book. By using one when you order, you help support this blog.
One Holy Night - Christianbook.com
One Holy Night

Leave a comment for a chance to win a free copy of the ebook. Please tell us where you live, at least the state or territory. (Comments containing links may be subject to removal by blog owner.)

Posted by Lena Nelson Dooley at 6:52 AM

J M Hochstetler is a fabulous writer and would love to have One Holy Night. Thank you for the lovely interview with her.
Amy C
VA

I enjoyed this interview with J M Hochstetler and would love to win a copy of her book. ONE HOLY NIGHT sounds like a very touching and inspiring story!

I am sure this will be wonderful. Just from the description and the first page, I got caught up in the story. I remember that time so well. I'm hoping Frank came around and that Maggie got her miracle, too. I hope I get lucky.

Thank you for another good interview, Lena. I think One Holy Night would be a wonderful read. Thank you for the opportunity to be a winner!

Love the storyline of One Holy Night, & would love to read the book! Thanks for the opportunity to win a copy!

Thank You for this opportunity!

Thank you for this opportunity

what a beautiful cover :)

I would love to win this book. Like the cover it fit the book. God blessing.
Norma from Ohio

Thank you, ladies, for stopping by and for your kind comments and interest in One Holy Night! I wish you could all win. :-) It's so good to meet all of you, and good luck in the drawing!

I would love to win this book and review it!!! Thanks! Rhonda
rhonda_nash_hall (At) comcast (DOT) net

Rhonda, thank you so much for stopping by! Good luck in the drawing!

What a lovely inspiring interview with Gods filling amazing wonders in each and every one of us. Would love to read this inspiring and majestic book. Thank you for the invitation
Anna
Children's Author of "My First Travel Book" with "Captain Frankie" on "Angelic" flights

Thank you for your kind words, Anna! I'm so glad you stopped by. Good luck in the drawing!

I don't usually read books about Vietnam. I think that's an unusual subject for a novel. I'm intrigued. Kristie From Ohio. kristiedonelson(at)gmail(dot)com Thank you.