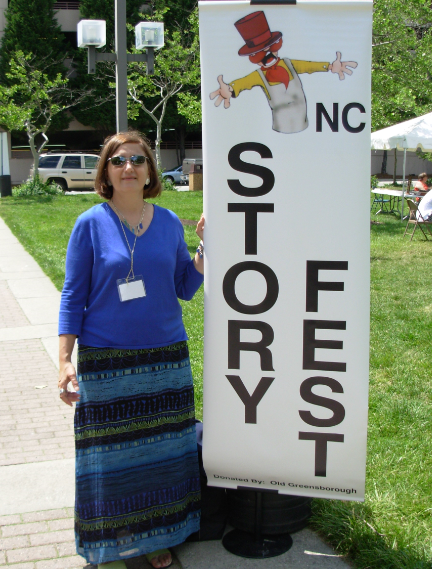 Welcome back, Joan. Tell us how much of yourself you write into your characters.
My characters all contain a little bit of me—and my daughter—and the other strong women in my family and circle of friends. In this book, I actually make a cameo appearance as a three year old—which is the age I would have been in the time period of this story!

What is the quirkiest thing you have ever done?
Hard to say. My friends all think I am very quirky. I give the wrong answer to questions, like to travel alone, enjoy watching other people win things—stop in the middle of pulling up my hose if a thought or story idea comes. I guess the strangest thing I ever did was agree to get into the ring with a bullfight bull in training. I survived but it was terrifying.

When did you first discover that you were a writer?
Practically at birth. Ok, a bit later, when I could hold a crayon and tried to make words even before I could form them. I used to tell stories all the time, make up things about pictures, daydream, “rewrite” actual instances into a more favorable ending when I got home from school.

Tell us the range of the kinds of books you enjoy reading.
Mystery to romance, to history, to literary fiction, to biography—a bit of science and science fiction once in a while

How do you keep your sanity in our run, run, run world?
Prayer, meditation, and spending time with my loved ones

How do you choose your characters’ names?
What pops into my head, obituary columns, friend names, (permission), and FB people

What is the accomplishment that you are most proud of?
Being a mom to my amazing daughter and the beloved of my wonderful husband

If you were an animal, which one would you be, and why?
Lioness—I love lions. Lioness is a strong female

What is your favorite food?
Pasta

What is the problem with writing that was your greatest roadblock, and how did you overcome it?
Laziness, the tendency to procrastinate—I set deadlines.

Letters from Korea takes on the story of Gina, Giulia's younger sister. Gina is in love with Sal, a man who thinks of her as a sister—a little sister. By the time he realizes he is in love with her, he has been sent to . Afraid to reveal his feelings by letter—he is not sure she loves him—he writes carefully bland letters. Gina’s friends and cousins advise her to try to make him jealous and the game begins! At the same time, Sal is trying to perform his duties in and help save lives when a spy tries to rescue enemy prisoners. Wounded in the effort, Sal is now fearful that he cannot live a normal life and decides to go home and keep quiet about his love for Gina so she can marry someone else. Fortunately for him, his sister and mother are more insightful about his feelings, Gina’s feelings, and Gina’s ability to commit to him even though he will have a permanent disability.

Please give us the first page of the book.
December 23, 1951
Somewhere in the Pacific
between , , and
Sergeant Sal Leonardi looked down at his knuckles, white from clenching the ship’s rail. He had gripped the rail this hard on his way to the Pacific to battle the Japanese in World War II. Before his first battle, he had feared what he would see and how he would react to carnage all around. Sal no longer feared his reactions in battle. He had faced those awful sights, sounds, and smells of battle before.

Thinking about the unknown at home preyed on his mind during this crossing, driving Sal to grip the rail so hard his nails dug into his palms. He had resolved his feelings for Gina but wasn't sure how and even if he should express what he felt. He was no longer a short drive from seeing her in . He was speeding across the Pacific to . He closed his eyes, fearful, not of facing the enemy, but of facing the thought that Gina might not love him as he loved her.

Sal leaned over the rail and looked down. A pod of dolphins splashed about, close enough to the ship to spray his army greens with saltwater. Maybe this time the war wouldn’t be as immediate for him. This time he was a pharmacist instead of a corpsman. Sal looked forward to helping the wounded. He couldn’t solve the problem with Gina easily. He was too far away now to tell her he loved her as a woman, not as a little sister. He needed to discuss his feelings in person.

One of the dolphins leaped up, looked Sal in the eye, and did a back flip. In spite of his worries, Sal laughed.

“Well, Sarge, what are you smiling about?”

Sal turned around. His friend, Bob Diehl, had joined him at the rail to watch the dolphins.
Bob tossed some bread crusts to the aquatic acrobats. “They say seeing dolphins on the high seas means good luck.”

“Hope so. We need all the luck we can get going into combat. Signing up for the National Guard after I finished my degree seemed like a good idea, but the closer we get to , the more I remember how awful battle really is,” Sal confided to Bob.

Bob changed the subject. “Do I see a pencil in your hand? Are you about to write to your girl? Again?”
Sal laughed. “Again? You’re one to talk. You write to Joyce almost every day. I only write to Gina, once a week.”

“We're engaged,” Bob countered. “Last I heard, you had barely even admitted to yourself how much you like this girl, let alone told her. So, once a week when you hardly tell her more than a list of our activities, is a lot.”

Sal shook his head. Bob was right. “I'm off to my bunk to write the letter. You can take over my spot here on the rails staring at the ocean.”

Bob turned toward the expanse of dark green water. The dolphins had disappeared. The wide water stretched out to meet a gray December sky. “Seems peaceful when you look out there. Makes me feel alone in the world. Not like I’m one of thousands stuffed into this ship on my way to a war.”

How can readers find you on the Internet?
www.joanleotta.wordpress.com
They can purchase the book at my page on Amazon

Thank you, Joan, for sharing this book with us today.

Readers, leave a comment for a chance to win a free copy of the book. Please tell us where you live, at least the state or territory. (Comments containing links may be subject to removal by blog owner.)

If you’re reading this on Google+, Feedblitz, Facebook, Linkedin, or Amazon, please come to the blog to leave your comment if you want to be included in the drawing. Here’s a link.
Http://lenanelsondooley.blogspot.com
Posted by Lena Nelson Dooley at 6:33 AM

Sounds like an enticing tale. Great interview by the way.
Thanks
AprilR
tarenn98 at yahoo dot com

A very pertinent topic, Letters From Korea, to today's military situation. Love to win and read your book. sharon wileygreen1(at)yahoo(dot)com

Thank you for sharing this delightful interview and the opportunity to win! Letters from Korea sounds like a special story!

A wonderful first page. I'm going to enjoy this book.

Sounds like a good book. Would love to win and read a copy. Thank you for the chance.
Karen G., NY
kmgervais(at)nycap(dot)rr(dot)com