Laurie Alice Eakes has been a friend of mine for a number of years. We were part of a three-author team, who wrote a Heartsong series set in . She came up with the theme that tied the books together. They later released in one volume titled Wild Prairie Roses.  I’m always thrilled when we both are able to attend the same writer’s conference and get to connect again. And right now, she’s living in , too, but not very close to me. I love her writing, especially her novels about midwives. They are so authentic.

Welcome back, Laurie Alice. As an author, I know it takes a lot of people to birth each book. Who were the people involved in the birthing of this book, and what were their contributions?
A woman named Juliana Fehr helped me with inspiring the initial thought of writing this book when I was in grad school in 1998. She is the director of the nurse-midwifery program at in , and a midwife herself, who helped me with a history of medicine project on which I was working. My talk then and her book Diary of a Midwife inspired me. She helped me with more research for this book. Authors Kristi Ann Hunter and Becca Witham also gave me much input in plot ideas. And, of course, my agent Natasha Kern, and my editor, Becky Phillpot offered many suggestions. Those are the major players.

If you teach or speak. What’s coming up on your calendar?
I have a speaking engagement/book launch on December 12 at the Bristol Public Library in . I will also be speaking at the Booksamillion there, but the time is not set. I also have an interview on Saturday December 5 on WHCB Radio 91.5 FM at 3:30 p.m. That is out of , but can also be streamed.

If you had to completely start over in another place, where would you move, and why?
Probably somewhere in either the Midwest like or , or . I am one of those rare people who likes winter, and I miss the lakes of the .

If you could only tell aspiring novelists one thing, what would it be?
Do not rush your craft and seek and accept constructive criticism. In other words, have a teachable heart and mindset. No one is perfect out of the gate.

You’ve been asked to be in charge of a celebrity cruise. Who would you ask to take part, and why? (AS in what program, singers, etc. [it doesn’t have to be writing related])
I would choose several people, underprivileged children, I think, or perhaps some older people, and have them on the cruise to be treated like celebrities. 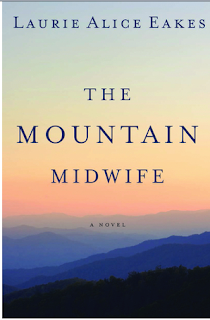 Tell us about the featured book.
The Mountain Midwife:
For nearly two hundred years, women in Ashley Tolliver’s family have practiced the art of midwifery in their mountain community. Now she wants to take her skills a step further, but attending medical school means abandoning those women to whom she has dedicated her life, the mountains she loves, and the awakening of her heart. Ashley Tolliver has tended to the women of her small Appalachian community for years. As their midwife, she thinks she has seen it all. Until a young woman gives birth at Ashley’s home and is abducted just as Ashley tries to take the dangerously bleeding mother to the nearest hospital. Now Ashley is on a mission to find the woman and her newborn baby ... before it’s too late.

Please give us the first page of the book.
The doorbell rang sometime after midnight. The electronic tinkling of the telephone in the middle of the night meant a patient had gone into labor. But this was the double-toned chime of the doorbell in the darkness, and that meant trouble.

Heart pounding, Ashley Tolliver rolled out of her queen-size four-poster, dislodging several cats in the process, and snatched up the jeans and T-shirt ever ready on a chair beside her bed. By the time the bell chimed again, she was dressed and shoving her feet into a pair of ballet flats. The third ring found her halfway down the steps.

A shadow loomed behind the sheer curtain covering the front door’s glass at the foot of the steps. It was a hulking man’s silhouette against the porch light. No sign of a woman beside him.

Ashley paused on the bottom step. At the least she should have brought her cell phone with her despite the terrible reception inside the house there in the hills. The gun her brother insisted she own for protection on her lonely nighttime excursions to patients was, as usual, locked in the glove compartment of her Tahoe.

She turned to retrieve her cell.

Three rings of the bell in rapid succession conveyed a sense of urgency. She was being silly. No burglar was going to announce his arrival by ringing the doorbell so persistently. Emergencies brought men and their expectant wives, daughters, girlfriends, to her door.

You have me hooked, Laurie Alice. Where can we find you on the Internet?
You can find me in numerous places. My Web Site http://www.lauriealiceeakes.com has information about and excerpts from my books.
I am on Twitter: http://www.twitter.com/@LaurieAEakes
On Facebook https://www.facebook.com/authorlauriealiceeakes/
I am working on a Pinterest board with midwifery resources, so keep an eye out for that in the next couple of weeks.

Posted by Lena Nelson Dooley at 8:28 AM

would love to win Angela in KY

Mystery and intrigue... would like to read on. Kathleen ~ Lane Hill House ~ Missouri

The first page leaves me intrigued, as does midwifery. Thanks for sharing!
Blessings,
Connie from KY
cps1950 (at) gmail (dot) com

I'm an RN and enjoy reading medical novels. My Mom was a midwife in N. Ireland many moons ago. Thanks for your interview. sm CA wileygreen1(at)yahoo(dot)com

This one sounds great! Thank you for the opportunity!

What an intriguing and exciting beginning. I want to know who is at the door & why.

Midwifery is fascinating. The birthing of babies has become so mechanized, the work of a midwife is, to me, more like birth is meant to be.

Great first page! I had midwives with all of my kids. Sounds like a great read! Thanks for the chance to win!

Pam said...
This comment has been removed by the author.
9:21 AM

The first page sucked me in again! I've read some of Laurie's historicals but would love to try a contemporary like this one.

I enjoy Laurie's books and look forward to reading this one.
I live in Oklahoma!
karenskrayons(at)gmail(dot)com

I love Laurie's writing and this will be an all new storyline for me!

I love Laurie's writing and this will be an all new storyline for me!

I have never read one of your books before. I can tell I have been missing out on a great read after reading your first page. I shall check my library for your books.
Thank you for sharing.
Have a blessed Christmas

The book certainly catches my interest with the first page. I would love to read it.
Edward A in VA

Enter me in your amazing giveaway!!
Conway, SC.

I read the first page and now I want to read it all. Enjoyed the interview.
Brenda in VA

Our church library readers love her books. Thanks for giving me the chance to win this one.
Janet E.
von1janet(at)gmail(dot)
Florida

"Mountain Midwife" sounds like my kind of book :-) Thank you for the chance and the interview!

What a first page! I look forward to reading this book.

Loved the first page really would love to win.

This would be a real page turner for me. Being a mamma of 12 I am fascinated to read midwives stories and this sounds like it's great.