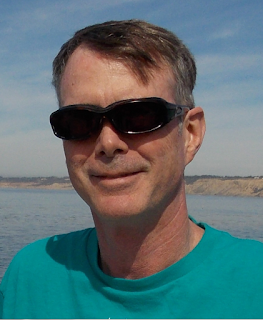 Welcome, Glenn. Tell us how much of yourself you write into your characters.
Developing empathy for others helps me to create and sustain characters that are hopefully rich, varied, likable, and entertaining. Since I question whether I could be described with any of those characteristics, I believe my characters are more imagined than reflective.

What is the quirkiest thing you have ever done?
I’ve never thought of myself as a quirky person—all the more reason to construe such an attribute. But I do, and always have to my memory, twiddled my hair when concentrating on something. Harder to do with my current short haircut, I have to dig hard to get enough hair to rub between my fingers.

When did you first discover you were a writer?
When my short story “Way the River Runs” was accepted by a magazine in 2007, I began to think that maybe I was a writer after all.

Tell us the range of the kinds of books you enjoy reading.
C.S. Lewis, J.R.R. Tolkien, and other epic fantasy writers with a Christian worldview on the one hand and John Grisham, Andrew Klavan, Eddie Jones, and other mystery/action adventure writers are among my favorites. I think I have also read nearly every Western written by Louis L’Amour. I enjoy historical fiction, beginning with Bode Thoene to Francine Rivers and even the sometimes profane work of Bernard Cornwall. And I read non-fiction historicals, such as Forth to the Wilderness by Dale Van Every, nearly everything written by Stephen Ambrose and David McCullough and many more. But the most rewarding read and study for me is the Bible – by far.

How do you keep your sanity in our run, run, run world?
Sanity? I used to have a heavy bag, but now I have to settle for peddling really fast on my stationary bike.

How do you choose your characters’ names?
Sometimes I look up lists of common names, either current or of another period of history. But more often I overhear a name that sounds cool to me. When I occasionally delve into fantasy, I like to use Greek, Latin, or Hebrew names that mean something either representative of or ironic to the character in question.

If you were an animal, which one would you be, and why?
As a kid, I sometimes fantasized that I was a talking mountain lion that went around doing good—sort of an animal superhero. Maybe influenced by Jack London’s dog characters “Buck” and “White Fang” both of whom were loyal and saved or tried to save their masters from the bad guys.

What is your favorite food?
Great coffee, strong, freshly ground and dark roast but with cream and sugar. Our Keurig makes a fast fix, but if I’m desperate, a shot of espresso and hot chocolate in a cup of skim milk will also power me through writer’s fatigue

What is the problem with writing that was your greatest roadblock, and how did you overcome it?
My greatest roadblock was thinking that creative writing was just too massive and that I wasn’t smart enough to pull it off. I overcame it by focusing first on trying to write a compelling short story. When others subsequently pointed out how pathetic my first attempts were, my self-doubts were reinforced. The only way to overcome was to keep studying, keep listening to criticism with discernment, and keep trying. 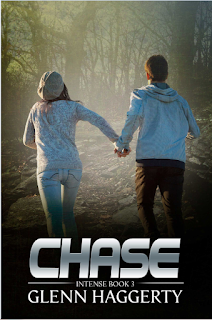 Tell us about the featured book.
In Chase, , a middle school newbie, watches helplessly as his friend, Jake, descends into drugs. With the help of a couple of classmates and encouraged by the local police, Tyler begins shadowing drug runners to rat out the methamphetamine dealer before his friend turns into a brain dead druggie. But has underestimated the power and raw evil that is about to be unleashed against him. There are lots of twists and turns and character surprises as and his friends come face to face with organized evil. Faith and courage are tested to the max, and many lessons are learned regarding life and friendships.

Please give us the first page of the book.
Prologue
Erick Donaldson crept from tree to tree scanning the hushed forest for his prey. Three-foot ferns screened the ground on either side of the path, but on the dirt trail ahead, cloven-hoofed prints pressed deep into the soft black soil.

He stooped. Fresh. His quarry was close.

A smile tugged at the corners of his mouth. He’d ditched algebra that morning, but Mom’s grounding would be worth it—especially if he had a new antler rack mounted to his wall.

Through a break in the tall trees, wisps of vapor rose from the valley below, and the domed roof of an old barn poked above the early fall greenery. Erick narrowed his eyes. He’d never seen buildings out here in the state park, but he’d never roamed this far north either. The dim trail twisted downhill and disappeared toward the barn. He touched the hunting license in the cargo pocket of his fatigues and stole after his game.

At the valley floor, he pushed through the brush line and stepped into the clearing.

Mist swirled against the barn and decay ate away the corners. Broken and missing boards lined the structure like unraveling bandages on a gigantic mummy. Elm saplings crowded the ruin. Just an abandoned barn. And yet . . .

The hair on the back of his neck prickled.

Thank you, Glenn, for sharing this new book with us. The teaser is intriguing.

If you’re reading this on Goodreads, Google+, Feedblitz, Facebook, Twitter, Linkedin, or Amazon, please come to the blog to leave your comment if you want to be included in the drawing. Here’s a link:
Http://lenanelsondooley.blogspot.com
Posted by Lena Nelson Dooley at 9:59 AM

this sounds so good! Shelia from Mississippi

Thanks, Shelia! I hope you get a chance to read Chase.

Wow! I was right there in the mist with Erick! I love books that draw me into them! Thanks for sharing Y'all!

Glenn Haggerty is a new to me author but one that I'd love to explore through reading "CHASE". The subject matter is intriguing but very interesting. I'm thinking it would be not only a very good book to read but one with eye opening moments and lessons to learn along the way. Thanks for the chance to win a copy!
Kay Garrett of Mountain View, AR
2clowns at arkansas dot net

Most of Chase (80%) is written from the hero's point of view. But I do use a couple of other POVs that increase the stakes and usually keeps readers turning the pages

This sounds intriguing. I believe there is a need for YA besides fantasy.
Connie from Texas

Forth to the Wilderness by Dale Van Every, written as creative non-fiction, was actually used as a text in a college U.S. History class I took in the 1960's. My wife saw the book on the table and thought it was a novel. She was halfway through reading it, and thoroughly enjoying the story, before she realized it was a history text.

That's funny! But I agree with your wife, the history was so engaging and his focus on characters made it a fascinating read IMO. You'll see my love for that part of the country in Chase, as well as in Run, Intense Book 2

Enter me in your awesome giveaway for the print book copy!!
Conway SC.