Dear Readers, today we’re welcoming back one of my favorite Texan Christian authors with book one of a new series. Be sure and express your welcome. 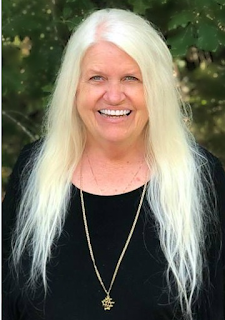 Carol, do you have a favorite genre to write? If so, what is it?
I do, and I’d say it is historical romance because of the gentility of the romance back then. Young girls dressed very modestly and were chaperoned when beaus came to call. And the young men always went through the father to date the daughter. Folks were more neighborly then, and parents didn’t have to worry about the safety of their children in the community.

If you didn’t live in the part of the country where you do, where would you live?
Oh, what a good question as I’ve ever only lived in and never even thought about living outside her borders. I guess I can say if I didn’t live in , I’d live in the Texas Hill Country. Hope that’ll work because I just don’t want to live much farther away!

The Lord moved us from the DFW Metroplex where we’d lived fifty-plus years in Irving to Clarksville, seat of Red River County (about 3 hours north and east) We live on thirty-four acres in a house we built in 2013. I call it The Peaceable. My husband’s brother has six hundred acres on three sides of our place, so we have lots of room to play! 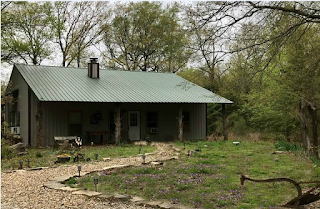 What foreign country would you like to visit and why?
This is the easiest question ever. I have always longed to go to and would go in a minute, at the drop of a hat! Why, because it is my heart’s desire to walk where my Savior walked, pray at Gethsemane, and lose myself in ! When I imagine myself there, the minute I get off the plane I go to the ground, prone, and worship. But since I’m 69 now, and cannot get off the ground by myself . . . I probably shouldn’t try that. First chance I got though . . . I kiss the ground!

At 76, I totally understand that not getting off the ground, or floor, by myself. Describe what you think would be the most romantic vacation you could take.
Ron and I went to for our belated honeymoon. I’d love going back there again with him. Otherwise, the only other place I even want to go is .

For decades, I’ve had a yearning to go to . I know. I will only see it from afar. Where would you like to set a story that you haven’t done yet?
Hmm, I don’t know. Most of my characters live in . They come from , and one daughter moved there. Another daughter ran away to San Francisco, so some of the family is there now, and in JEWEL’S GOLD—my new release next month—my heroine goes to Alaska! My Biblical fiction have all been set in . . . and of course in UNIQUELY COMMON and REMI (my April and May releases this year) they travel from to , and then on the Oregon/California Trail! I haven’t thought about any other place . . .

What is the main theme of this novel?
The theme of JOHN DAVID’S CALLING is following the Lord wherever He may lead you. It’s about praying and researching and finding your own way along His chosen path for you. David had two grandfathers who loved the Lord, hearts, souls, and minds, yet were so different.

The one who reared him, John Harris, went to every time the doors opened and followed its strict doctrines, believing whoever wasn’t a member in his church would be going to hell. These days most aren’t so staunch. The other grandfather, Nathaniel Nightingale, preached in tents most his ministry before settling in a .

But God doesn’t have grandchildren, and David needed to decide for himself how he would worship God. Each of us must do the same.

He elects to attend and is soon called to the mission field.

Tell us about the story. 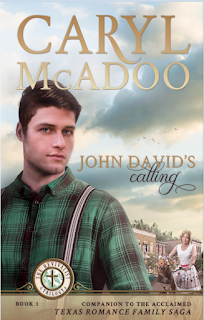 JOHN DAVID’S CALLING is Book One in the Revivalist Trilogy. Being a romance, David’s one desire beyond pleasing God is to make Hannah Claire his own. But like me, she never wanted to move far away from her parents and hometown. Back when we were still in our teens, I made Ron promise not to carry me way off!

It looks like, though the two have loved each other since they were children, the mission field call will keep them apart.

Book Two HANNAH CLAIRE’S WILDERNESS released in March and Book Three in the trilogy, KING DAVID’S TABERNACLE will launch in 2020.

Please give us the first page of the book.
The book opens with a scene between David and his favorite cousin.

He'd about made up his mind; been thinking on it a while though he hadn't asked anyone's counsel. David eased the truck to a stop right at the edge of Aunt Iva's property then faced his cousin. Good as any to try it out on.

“Hey! What are we talking? You finally given up grape for Coca-Cola? Because I know you ain't decided to enlist.”

His favorite cousin could always put things in perspective. He grinned. “Nah, nothing as dramatic as that. I've decided to change my name. I'm going to court and make it official. But from now on, I'm John David Nightingale.”
“Oh man! You can't do that. Everyone will think you’re copying John David Crow! Plus, why whip up all the tongue waggers? Reminding everyone about your mama and daddy can't be any good for her.”

“Hey, she ain't going to like it any more than Uncle John. What? You wanting to give them all a good reason to call you a bast—”

“Don't you dare, Sonny Harris.” David held up a warning finger then waved him off. Of all people!

“Just like you said. I know who my father is, and it's for sure I don't want to carry Harry Prescott's name. I like John David way more than David John. Sounds better; don't you think?”

Thank you, Caryl, for sharing this new series with us. I’m eager to read it.

Readers, here is a link to the book.
John David's Calling (The Revivalist Book 1)

If you’re reading this on Goodreads, Feedblitz, Facebook, Twitter, Linkedin, or Amazon, please come to the blog to leave your comment if you want to be included in the drawing. Here’s a link:
Http://lenanelsondooley.blogspot.com
Posted by Lena Nelson Dooley at 1:00 AM

I love Caryl’s books and would certainly love to read this one.
Melanie Backus, Texas

Welcome Caryl. I too have a dream to go to Israel. LOL and no I would not be able to get if I got down. I love your style of writing. I feel like I am a part of the story. Woohoo. I would love to read another one of your books. Thanks for the interview today
quilting dash lady at comcast dot net

I can agree with you about the "gentility" of times past, when girls/women dressed modestly and acted modestly. I yearn for those days again, and that's why I love historical romance. I write modern murder mysteries with a touch of romance, but I've thought how cool it would be to time travel back to historical moments--and the best way to get there is through a book! As a Texas girl myself, I've been to Clarksville many times. My sister used to teach at the high school there. I'm looking forward to reading your book. God bless you.
Tamara G. Cooper
Northeast Texas girl, too!

My sister and her husband just got back from the Holy Land.
Lucy from WV

This sounds like a wonderful book! Thanks for this giveaway.
Connie from Kentucky
cps1950(at)gmail(dot)com

I enjoy Caryl's stories! I'd love to read this one.