Welcome, Jackie. Tell us how much of yourself you write into your characters. 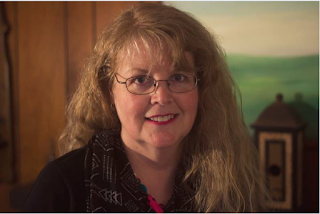 Even though my characters have their own likes, dislikes, and back story, some of them enjoy art as I do or cooking/baking. Human nature is fascinating and offers a lot to pull from, so it’s more fun writing characters who aren’t me.

What is the quirkiest thing you have ever done?
The quirkiest thing I’ve ever done was baking Lembas Bread, the Hobbit bread from Lord of the Rings. It has the ability to keep Hobbits satisfied for hours when they eat a small amount. Amazingly, it did work. If that’s all there is to eat, you don’t want to eat it. Ha!

When did you first discover that you were a writer?
I knew that I loved to write when I was a teenager and wrote a play (comedy) for our art club. I didn’t realize that I could be a writer until much later when I wrote my first book in my forties.

I started writing novels when I was in my forties, too. Tell us the range of the kinds of books you enjoy reading.
I loved reading Phyllis A. Whitney, Mary Stewart, and Victoria Holt back in the day. Then Agatha Christie and other mystery writers Martha Grimes, and Diane Mott Davidson. Christian authors that I especially enjoy are C.S. Lewis, Frank Peretti, Stephan Lawhead, Colleen Coble, and many new authors. Favorite genres: Mystery with a thread of Romance, Science Fiction, Fantasy, and Adventure.

And I enjoy many of the same authors that you do. How do you keep your sanity in our run, run, run world?
Both reading and writing are calming to me and give a feeling of accomplishment. It’s nice to sit down with a book and a big cup of tea.

How do you choose your characters’ names?
Oddly enough, the character’s names just come to me for the majority of the time. If it’s a character from another country, I’ll Google names for that particular place.

What is the accomplishment that you are most proud of?
I think it would have to be the ability to write a book from beginning to end. It seems astonishing to me. I’m thankful for any amount of enjoyment, entertainment, or comfort that it can bring to others.

If you were an animal, which one would you be, and why?
I would be a seeing-eye dog or a therapy dog. I would want to give the most help and caring possible.

What is your favorite food?
Dessert. Ha! Is that a good answer? *Blushing* 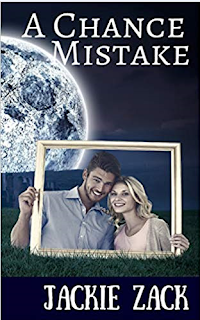 A Chance Mistake is a Sweet Romantic Comedy with Suspense. Kory Slate is a famous author who is in need of some rest and relaxation. He makes a split-second choice by a flip of a coin to go to . On the flight there, he begins to suspect that he’s being followed. He takes in a bit of sight-seeing in , , and is drawn to a quaint bookstore with his books displayed in the window. He meets a delightful clerk named Dafina who is the spitting image of the female character in his newest book. The dynamic of his whole trip is altered into a comedy of errors by meeting her. Kory gets pulled into playing the part of Dafina’s husband to help her out of a terrible problem. But the two men are still following him. By helping Dafina has he implicated her to the danger that follows him? And how can he possibly keep from falling in love with her?

Please give us the first page of the book.
Kory Slate stepped aboard the jet with seconds to spare, and he wasn’t the only one arriving late. Two men hurried one pace behind him and entered. A flight attendant slid the door shut with a gliding, whooshing sound. As Kory strode to his seat, the accordion walkway slid away from the plane. Each window he passed by gave a slightly different perspective of the retracting motion against gray clouds. Why had he chosen to go out of the country? Not his plan at all.

His paranoid editor had been right, at least about one thing. Kory needed an updated passport. Good thing he got one and had it on him. In the back of his mind, he must’ve toyed with a foreign destination. But Wales?

He hefted his backpack in the overflowing compartment above his seat and jammed it in. He dropped down into the aisle seat. A quick glance over his shoulder told him the two men had found seats—aisle seats cattycornered from him. One man sat four seats behind him and the other six. Weird. Nothing stood out about their appearance, except the taller one closest to him had tattered green shoe laces.

If he had to identify them in a line-up, it would be near impossible. Both had a medium build. Their jeans with muted t-shirts and hoodies could belong to anyone.

Kind of took on the air of his first manuscript that lay moldering in his old bedroom closet. The hero of the story had been tailed for close to three months by two nefarious thugs. He was unaware of his shadows until the day he put it all together. The near fatal ‘accidents’ that the main character experienced were orchestrated.

The novel seemed to capture his essence, since it had been his first attempt at storytelling. His close friends and family, well—the ones he could get to read it—raved about it. His editor said to keep his focus on the next new thing.

Yeah, right. But with six best sellers in two and a half years, he needed to clear his mind. Step off the train for a while. Do a mental cleanse and stay away from Facebook. His editor had balked at Kory’s announcement that he was slipping off the grid for a couple of months, maybe more. No social media. No writing. And where was he going? Sorry, Ed. Can’t tell ya. Kory didn’t know the answer himself. Only that wouldn’t be seeing him for quite some time.

A blur caught his attention out of the corner of his eye, causing a sinking dread. Too much like his last book and, he hated to admit it, probably the real reason for the needed break. An unwanted shiver raced down his neck to his spine.

Interesting, you have me hooked. How can readers find you on the Internet?
Facebook https://www.facebook.com/profile.php?id=100008256105515
BookBub: https://www.bookbub.com/profile/jackie-zack
Twitter: https://twitter.com/JackieZack1
Amazon: https://www.amazon.com/Jackie-Zack/e/B00V2GC32E/ref=dp_byline_cont_ebooks_1
Readers, here’s a link to the book.
A Chance Mistake

If you’re reading this on Goodreads, Feedblitz, Facebook, Twitter, Linkedin, or Amazon, please come to the blog to leave your comment if you want to be included in the drawing. Here’s a link:
Http://lenanelsondooley.blogspot.com
Posted by Lena Nelson Dooley at 11:34 AM

The story, "A Chance Mistake," Is wonderful. Keeps you turning until the end.

This sounds like it will be very interesting. It already has piqued my curiosity. I'd like to read more. Linda in SoCal

Thank you! I had so much fun doing the research for A Chance Mistake. Wales is a very interesting place!

Sounds like this could tickle my funny bone. Thank you for sharing. Blessings from WV.

Thank you for your comment, Lucy. I love to add humor whenever I can. And Dafina has a sweet, quirky way about her. :)

A romantic comedy with suspense will make this a very interesting book! I enjoyed the interview!
Beth from Iowa

Thank you, Beth! So glad that you enjoyed the interview!

I always enjoy suspense in a story. Thanks for sharing!
Connie from Kentucky
cps1950(at)gmail(dot)com