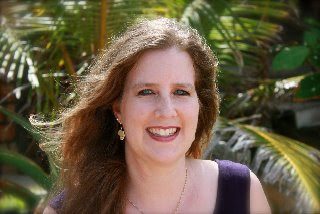 Lisa Harris is the second author we're interviewing with this release. Welcome, Lisa. What contribution did your story make to the collection?
A Matter of Trust was one of the first romances I wrote, and when Lena, Beth and I decided to submit a collection to Heartsong, I knew this was the story I wanted to use. But I also knew that it was going to take a lot of rewrites to make it sellable. Because I already loved the story, I really enjoyed going back, reworking the story, and fleshing out the characters the second time around.
Here’s the back cover blurb: A year ago Kayla Marceilo had it all - a great job in Boston and a handsome, successful fiance who loved the Lord...or so she thought. When Ty turned out to be a liar, Kayla's world was shattered. Moving back home seemed like a good way to try to pick up the pieces. Just when she feels like everything's falling into place, Ty reappears in her life, claiming to have changed. But has he?
Ty Lawrence is sorry for his past. Tragedy and heartache made him hit rock bottom and realize what truly matters. He's changed his ways and his hoping for a simpler, more meaningful life in Farrington...and another chance with Kayla. When Ty's past catches up with him and he's accused of defrauding his former company, can he ever earn Kayla's trust - and love - back?

Did you enjoy working with the other authors in the collection?
One of the blessings in writing for me has been the authors and readers who I’ve befriended throughout the years, and Lena and Beth are some of my closest writer friends. So yes, I definitely enjoyed it.

Did it take a lot of interaction?
This collection took little interaction. Beyond the setting, each story stands alone.

How was the setting chosen?

I believe originally, Beth had done a lot of research on cranberry farms which we all thought was a unique setting. Massachusetts proved to be the perfect location for the series.

What do you like most about this collection?
I enjoyed the setting and the fact that there is a thread of mystery, which I always love to add to my stories.

What book are you currently writing?
I’m currently brainstorming book two in my Mission Hope series for Zondervan. The first book in the series, Blood Ransom, will be released next March and is a fast-paced suspense novel.
“Deep in the heart of Africa, two American lives are about to change forever. Natalie Sinclair and
Dr. Chad Talcott want to make a difference in under-developed African villages … but they didn’t count on risking their lives in the process. Romance and adventure drive this powerful thriller about the modern-day slave trade and those who dare to challenge it.”

Tell us a little about your family.
My husband and I, along with our three children, moved to South Africa about six years ago to work with my husband’s aunt and uncle in leadership training and church planting. About a year ago, after six months learning Portuguese in Brazil, God called us to Mozambique where we are continuing our work for African Outreach Ministries. Life is always an adventure, but we feel blessed to be a part of the work here.

What is the first page of your story in the collection?

Ty Lawrence was running out of time. He drummed his fingers against the top of his polished mahogany desk that sat near the window of his office and tried to calm his staggered breathing.
One more minute, Lord. That’s all I need.
The computer whirred as it copied the files onto his flash drive. He might not have evidence to hand over to the police for an actual conviction, but he did have enough confidential files at his apartment to keep a government official busy for weeks if Abbott Financial Services was ever indicted. These last files, thanks to an unanticipated inside tip and his password, were the best corroboration he’d found so far in linking the CEO, Richard Abbott, to fraud.
And thirty years behind bars if Ty had his way.
Forty-five seconds left.
Ty stuck a dirty coffee mug and a half-eaten bag of peanuts from his desk drawer into the cardboard box he’d brought from home. The corner office with windows overlooking the city, the company Jag, and a yearly bonus that could pay off the debt of a small, third world country hadn’t been enough enticement to stay in the game. Not since the morning he’d awakened with a hangover and the front page of the Boston Times in his lap with pictures of five executives from
Orlando arrested for fraud and conspiracy charges.
It was a sobering thought, requiring little imagination to realize that was where he was headed if he didn’t get out before it was too late. The unexpected letter from an old friend offering him a job in Farrington, Massachusetts, had cinched the deal. Never mind the fact that he’d make a third of what he made now, drive his old car, and work from an office smaller than his bedroom closet.
He’d have a clean conscience, which was worth more than Richard Abbott could ever give him.
Ty glanced at the computer screen. Twenty seconds. His head throbbed. Once Abbott received the resignation letter with his morning correspondence, security would be sent up to escort Ty off the property.
Voices buzzed in the hallway, growing louder as they neared his office. Five seconds. . .
His office door slammed against the back wall as his boss crossed the threshold. Ty looked up from the potted plant he was setting in the cardboard box.
A real hook. Now, Lisa, where can the readers find you on the Internet?
I keep a blog on our life in Africa at http://myblogintheheartofafrica.blogspot.com/ . Stop by and leave a comment. I’d love to hear from you! I also have a website at http://www.lisaharriswrites.com/ . Thanks so much for having me, Lena. It’s always a privilege to be here!
And I love having you, Lisa. Readers, you'll want to go to her blog and sign up for it. I love reading about her life in Africa, complete with pictures.
Here's a link where you can order Cranberry Hearts:
Leave a comment for a chance to win a free copy of the book. The only notification you will have will be the winners post on this blog, so be sure to come back to the blog a week from Saturday to see if you won.
If you're reading this on Feedblitz, Facebook, or Amazon, please come to the blog to leave your comment. Here's the link:
http://lenanelsondooley.blogspot.com
Posted by Lena Nelson Dooley at 3:04 AM

Hi! I love the story Lisa, it really sounds great. And your blog is really exciting place :)

Hi this hot summer day from SC. Enjoyed the interview with Lisa and sure would love that book, sound to be a winner.

Wow, I can't wait to see what happens next! I would love to win Cranberry Hearts, please add me for the drawing. Thanks!

Thanks for stopping by, ladies and for doing the interview, Lena!

Now to get a copy of the book in my hands. Living so far away, I'm always the last one to see it. LOL

This book is currently on my Wish List, so I would love to win a copy. It sounds like a great book!

Lisa, you have me definitely hooked! I can hardly wait to read Cranberry Hearts! Please enter me in the drawing.

What a hook! I'm hoping to read more.

I love Lisa's Africa blog, it's so cool! Thanks for the giveaway Lena!

This book sounds extremely interesting. I can hardly wait to read it. Please include me in your drawing. Abby

Your book sounds great, and I love the hook of mystery involved. Please enter me. Thanks for another great giveaway.
desertrose5173 at gmail dot com

Lisa leads such an interesting life!
Her books are fabulous.
Many thanks, Cindi
jchoppes[at]hotmail[dot]com

Hope you all enjoy the book. (Wish you all could win :-)) It was definitely a blessing to do this project with Beth and Lena!

I'll be giving a way copies on my blog next week, so be sure and pop over and say hello then!

I would love to enter for this book again also.
I actually love the South African Accent and am a cricket fanatic thats has a very soft spot for the South African team. I know you are now in Mozambique but its close! We have a few South African and Zimbabwean people living in my town.
I hope the winter isn't to cool for you. its been quite cold here

I love the South African accent too, Jenny. My youngest had a very strong accent until we moved to Mozambique and I'm so sad he's lost it!

We were in SA last week where it was very cold. Warmer at home, but I'm still wearing a jersey in the daytime! Stay warm!

Sounds like a book I'd love to win and read. Thanks.

I'm looking forward to your Africa series. They look very exciting. I just finishing a riveting book about Africa called Scared by Tom Davis. It's one everyone should read.

Would love a chance to win this too!

Scared is on my to buy list when I come back to the states for a visit this fall. And of course I can't wait for Blood Ransom's release next year either. :-)

I will pick up almost any book that has a New England setting, and Cranberry Hearts looks like a very enjoyable read. Thank you so much for the interview and giveaway.

Thanks for the interview. It's always fun to learn more about the authors. Thanks
Kristen

I've read another of Lisa's books and know what a fantastic writer she is! Would love to win Cranberry Hearts!

Thanks for the compliment, Edwina. I'm thrilled you loved the book!

Thanks for entering me in the drawing.

I really enjoy your books Lisa,
Thanks for the opportunity to win your newist book,
Wendy

This looks like it is going to be absolutely wonderful. Please include me.

This sounds like a good book and something about the title just grabbed me!

Very interesting interview. I would love to read the book.

Wow! This sounds really good. I will definitely be looking for this book if I don't win. Thank you for the chance to win.