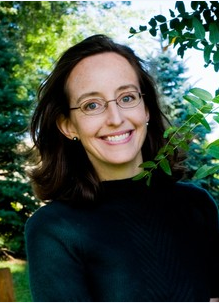 I have loved all of Siri's books. Welcome, Siri. What are some of the spiritual themes you like to write about?

Most often, I’ve written about the idea that the only thing worth being is yourself and that God loves you just the way you are. We create big problems in our lives when we don’t consider ourselves worthy of accepting God’s love.

A Heart Most Worthy released at the beginning of March. My next book, The Messenger, will be releasing in spring of 2012.

I must feature it on my blog. If you could spend an evening with one contemporary person (not a family member of yours), who would it be and why?

Anyone on staff at Colonial Williamsburg Foundation’s Decorative Arts/Textile and Costume area. I love history and fashion and the Foundation does such an excellent job of research and documentation that it would be a dream come true to spend an evening listening to them talk about period clothing.

What historical person would you like to meet (besides Jesus) and why?

I would be thrilled to meet any of the characters from my historicals because I would love to know if I got it right. If the general lifestyle I described in my books is the lifestyle my characters would have lived.

That would be interesting. How can you encourage authors who have been receiving only rejections from publishers?

For ten years, I only received rejections and I received 153 of them. Success in this business often comes from persevering and learning from your writing mistakes. Hang in there!

That is so true. Tell us about the featured book.

A Heart Most Worthy is a story set in 1918 among a group of Italian immigrants. The best elements of Romeo and Juliet, Snow White, and The Boy Next Door collide in the teeming streets of Boston’s colorful North End. Each day Julietta, Annamaria, and Luciana enter the world of the upper class, working on gowns for the elite of society. The three beauties each long to break free of their obligations and embrace the American dream--and their chance for love. Their destinies intertwined, each harboring a secret from their families and each other, they long to be found worthy of the love they seek.

I know I'm going to love this one, too. Please give us the first page of the book.

On May 2, 1918, a short article appeared in the Boston Globe. It was only three sentences long; not an article really. Just a mention. It appeared on page twenty-four on the outside column, where most people hold on to a newspaper. I'm sure you wouldn't be very surprised to know that few people noticed it as they read the paper that morning and several people smeared jam on it as they turned the page. Only a very few read it.

On the night of April 12, the Count of Roma was assassinated by an anarchist's bomb at his house in that eternal city. His mother, the contessa, and his daughter were not harmed in the blast, but were later found to have disappeared. The new count suggests sinister persons may be involved.

Rare was the person who consulted the Globe those days for any news other than the war. There were no tears in America to spare for luckless Italian counts and their vanished daughters; there were still too many left to shed for lost sons and wounded fathers. For the scores—the hundreds, the thousands—being killed on the battlefields of Europe every day. So it could be expected that a small article about an insignificant foreign incident, buried in the depths of the newspaper, garnered little attention.

Except that actions committed on one side of the world have a way of impacting the other. And people previously unknown to one another happen to meet all the time. In the Italian-speaking North End that day, copies of the Globe were used to wrap fish and line cupboards, while up on Beacon Hill, the newspaper was read from page to page, top to bottom. And in one particular house, the lady of that mansion sniffed as she sipped her tea and thought how it was just like an Italian to be blown up by one of his own kind.

Two of the people mentioned in the article had access to the paper that day, but the hapless heiress couldn't read English, and the sinister persons were too busy hatching evil plans to bother with a propaganda tool of the capitalists' machinations. And so the fact that there had been an assassination registered on no one in particular. And life went on just the way it usually does.

But fate has a way of laughing at human ignorance and God spins mysterious plans, and by August that Italian count's death would start to matter very much to quite a few people who had never known him at all.

Very intriguing. How can readers find you on the Internet?

I would love them to visit my page at Facebook or to look up my website at http://sirimitchell.com/ And I love to hear from readers at siri@sirimitchell.com

Thanks so much, Lena, for this opportunity to visit your blog!


The only notification you’ll receive is the winner post on this blog. So be sure to check back a week from Saturday to see if you won. You will have 6 weeks from the posting of the winners to claim your book.


If you’re reading this on Feedblitz, Facebook, or Amazon, please come to the blog to leave your comment. Here’s a link.


http://lenanelsondooley.blogspot.com/
Posted by Lena Nelson Dooley at 2:01 AM

Email ThisBlogThis!Share to TwitterShare to FacebookShare to Pinterest
Labels: A Heart Most Worthy, Siri Mitchell

Stunning post thank you so much for sharing it with us I feel inspired !

I'm a huge fan of Siri's books and would love to win this one!

I've loved all Siri's books too!!

I am so intrigued by this book. It sounds like a terrific read.

Siri's books are so beautifully written! They leave a lasting impression. Thank you for the opportuntity to win a copy.

I love Siri's books & look forward to reading this one also.

Siri, I love your books!

I would love an opportunity to win your book...please enter me in the giveaway:)

Thanks for the interview and the chance to win Siri's book. i have not read one of her books - my list of new authors grows! thanks again. mitzi_wanham[at]yahoo[dot]com
Marianne from Arizona

Thanks, everyone, for your kind words about my writing! What a great way to start a Monday as I plot out a book!!

I've read A Constant Heart and loved it!! I've also heard nothing but great things about She Walks in Beauty. I would love to be entered for A Heart Most Worthy.

Really like the cover of the book. It sounds like a great book. Would enjoy reading it.
From the Bible Belt

I love Siri's books!! Enter me, enter me.

Wow after ten years and that many rejections I probably would have given up! I'm glad you didn't though! I love your books!

I love a good historical but I've haven't yet tried any of Siri's books. This one sounds incredibly interesting!! Thank you for the chance to win.

I live in the Ozarks of Missouri, where it was 75 degrees on Saturday and there's a chance of snow today. I thought we'd left winter behind us... I guess not!

The cover is gorgeous! I haven't read anything by Siri yet, but look forward to reading this one! Thanks for the chance to win!
Kari in ORegon

I LOVE Siri's novels....thanks for the opportunity to read her latest :)

Love the cover. I would love to win a copy of this book. Angela from KY.

Ohhh! This book looks really good! I've read another book by Siri, and really enjoyed it! Please count me in for the giveaway

Please enter me! I would love to win this book. Thanks!

I love the book's cover! My dad who will turn 93 this year and her book takes place in 1918...
Thanks, Cindi
jchoppes[at]hotmail[dot]com

I read the first 3 chapters of "A Heart Most Worthy" online and found it and the writing style to be very intriguing. I'd love to win it and finish the book.
Thanks.

I'm also a HUGE fan of Siri. I can't believe she was rejected that many times. In a twisted way that is encouraging.

I would love to win this book by Siri Mitchell. Thanks for the chance. I live in Alabama. ybutler at oppcatv dot com

Sounds like a great read!
Thank you for making it possible!
Charlotte Kay, Ohio
charlovesmark at gmail dot com

I'm always excited about Siri Mitchell's new books. :) This one sounds like another winner - thanks for the giveaway!

Please enter me in this giveaway.

A Heart Most Worthy sounds like one I willl look forward to reading. Please enter me in the giveaway.

Would love to be entered to win A Heart Most Worthy. It sounds like a wonderful book.

I would live to win Siri's new book. Please enter me.

Please enter me! I'd love to read this book. The cover is gorgeous! :D

I live in the midwest.