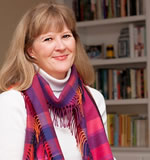 Tell us about your salvation experience.
This always feels like an awkward question to me because I didn’t have a type of conversion. There have definitely been points in my life when I deepened my relationship with God—there still are points like that—but I don’t remember a time of not believing. Even as a child, I believed. It’s been a blessing—because life isn’t easy! God is good but life is hard.

You’re planning a writing retreat where you can only have four other authors. Who would they be and why?
Phillip Yancey, Barbara Kingsolver, Malcolm Gladwell and Walter Isaacson. Each talented writer is overly blessed with skills I’d like to improve on. Phillip Yancey—his biblical knowledge and story telling ability. Barbara Kingsolver or Jodi Picoult (either one!)—for characterization and plot development. Malcolm Gladwell—his brilliant insights into history and current events. Walter Isaacson—a top notch biographer. I will pepper them with questions during the entire writing retreat…until they get fed up with me and insist on leaving.

Do you have a speaking ministry? If so, tell us about that.
Could I re-phrase that? I accept speaking events that are related to my book ministry. It’s been very positive to develop and sharpen speaking skills (used to terrify me!), but mostly, I enjoy interacting with people. Right now, most of my speaking events have focused on lessons from the Amish.

What is the most embarrassing thing that has happened to you and how did you handle it?
Well, that’s not hard! Most recently, I spoke at an event without realizing that a pink Velcro hair roller was stuck to the back of my jacket. Mortifying! Someone finally removed it and handed it to me with a sly grin on her face. Ah well…this author gig is constantly reminding me not to take myself too seriously.

People are always telling me that they’d like to write a book someday. I’m sure they do to you, too. What would you tell someone who came up to you and said that?
Then write. Each day, every day. Treat your daily writing as piano scales—practice, practice, practice. Set goals, join a writers’ group, attend writers’ conference, get experience in all kinds of writing (church newsletter, blog). Develop a tough skin for constructive criticism. Study the publishing business. Most importantly, just write!

Tell us about the featured book.
If you don’t mind, I’m going to let a review from Publisher’s Weekly describe The Haven: Popular Amish romance novelist Fisher (The Choice) continues her Stoney Ridge Seasons series with a stand-alone tale focusing on Amos Lapp’s middle daughter, Sadie. Returning from where she has spent the winter with older sister Julia and her husband, Sadie picks up an unexpected traveling companion. Instead of the safety and support she expects from her Amish friends and family back home in , Sadie bristles as hurtful perceptions are formed primarily based on gossip and innuendo rather than truth. She does, however, develop a confidence in Will Stotz, an intern for the county’s game warden who moves onto the Lapp farm to oversee two nesting falcons. Their relationship complicates Sadie’s relationship with Gideon Smucker, a local boy who has had his heart set on Sadie since they were children. Fisher’s style is light and engaging. Her setting may be a simple Pennsylvania Amish community, but the struggles of faith, trust, and forgiveness are common to a wide-ranging audience. Moral elements are so deftly woven into the plot that most readers will learn the lesson before realizing there is one.

Please give us the first page of the book:
1
It never failed to amaze Sadie Lapp how the most ordinary day could be catapulted into the extraordinary in the blink of an eye. She was still a little dazed. She couldn’t shake the feeling that it seemed her whole life had been leading to this particular moment. She had a strange sense that this day had come into her life to change her, to change everything.

But that didn’t mean she felt calm and relaxed. Just the opposite. She felt like a homemade sweater unraveling inch by inch. As she caught her first glimpse of Windmill Farm, she hoped that, maybe, things could get straightened out, once she reached home.

Sadie had spent the winter in , , helping Julia and Roman, her sister and brother-in-law, settle into ’s childhood home. A part of every day was spent shadowing Deborah Yoder, an elderly Old Order Amish woman who was known as a healer. Knowing of Sadie’s interest in healing herbs, Rome arranged a meeting with Deborah that resulted in a part-time job. A part of Sadie wished she could have spent years studying and watching the wise old woman.

But last week, Sadie woke and knew she needed to return home. When Sadie told Julia, her sister’s face fell with disappointment. She had expected Sadie to stay through the summer and tried to talk her out of leaving. But Old Deborah understood. “The wisest people I know,” she had told Sadie, “learn to listen to those hunches.”

The taxi swerved suddenly, jerking Sadie out of her muse. A few more curves in the road and she would be at Windmill Farm. She hoped the family was there for her homecoming. Wouldn’t it be sad to try to surprise everyone, only to arrive to an empty house?

Maybe she should have called first, to let her father know she was coming. But he would have asked her why she was changing her plans and she didn’t want to say. Maybe she should have at least tipped off Fern, their housekeeper. The one person she knew she couldn’t confide in was Mary Kate, her twelve-going-on-thirty-year-old sister. It was well known that M.K. liked to babble and tell. She was the self-appointed bearer of all news—truth or otherwise.

Sadie gazed out the window. Coming home felt harder than she thought it would be. The family was much smaller now. It would be quieter without Rome and Julia. Without her brother, Menno. Even Lulu, Menno’s dog, was living with Rome and Julia now. Sadie leaned her head on the back of the seat and closed her eyes for a moment, remembering. They used to be a family with a mom and a dad, three sisters and a brother, and crazy Uncle Hank. Pretty normal.

Until her mom passed and her dad, Amos, developed heart trouble. Then Uncle Hank found a housekeeper in The Budget. The sisters secretly called her Stern Fern. She took some time to warm up to, but she was just what the Lapp family needed. Sadie would have to add the Bee Man to the “just what we needed” list too. When Roman Troyer came to live at Windmill Farm last summer, life took a happy upturn. For Julia, especially.

But then Menno died in a terrible accident and his heart was given to his father. Everything changed again.

They weren’t a normal family anymore. Julia had married Rome and moved to Ohio. And wasn’t that also the way life went? Sadie thought, moving the basket beside her out of the direct sun. One minute you felt like laughing, and the next thing you knew, you were crying. She glanced at the basket. Would she ever feel normal again?

I loved book one in this serried. I know I’ll love book two as well. How can readers find you on the Internet?
Oh…I love to connect with readers! I can always be found at www.suzannewoodsfisher.com, plus on Facebook www.facebook.com/SuzanneWoodsFisherAuthor and Twitter suzannewfisher. Thanks for hosting me today!

My pleasure, Suzanne. I love having you.

Readers, here are links to the book. By using one when you order, you help support this blog.
Haven, The: A Novel (Stoney Ridge Seasons)

I love reading about the Amish!

I will have to track down the first book in the series if I win this one!

Please enter me! This sounds like my cup of tea! :)

I have really been enjoying reading Amish books lately. I wouild love to read this one.

I love Suzanne's books! You can tell she does her research. The Keeper was wonderful, and I've been anxious to read The Haven.

thanks for hte chance to read suzanne's latest novel

definitely a fan of Suzanne. Thanks for the chance to read this
cheryl in IL
'msboatgal at aol.com

I would love to read this! I'm in MN.

Such a fabulous interview. THE HAVEN looks wonderful.

I loved the first book in this series, and just reading this excerpt brought tears to my eyes all over again! Whether I win or not, I will be getting this book :)

I have bought and read every Suzanne Woods Fisher book from the time she first started writing, with the exception of The Keeper, (which I have), but got behind on! She is definitely one of the finest authors of Amish fiction out there! I would love to win this, so that I can read the two back to back! Thank you!

I enjoy Suzanne's Amish books so much! I'd really like to read this one.
Beth from Iowa

i would love to be able to give this to my Mom as she recuperates from emergency surgery. Of course, that means i have to get the first books in the series, too.

I really love to read anything Amish and Suzanne does such a great job with her writing. Would love to read "The Haven".

I love reading about the Amish from different authors perspectives.

The Amish genre is so fascinating and I would love to win this one, please count me in. Blessings!

Hi Lena and her readers! So sorry I didn't pop by earlier this week--I thought the interview was scheduled today. Thank you for your warm and encouraging comments! Thank you, Lena, for hosting me on your blog. Warmly, Suzanne Woods Fisher

Would love to win this book...Dee-Dee's Nana

Would love to win this book, love Suzanne's books....Angela