Martha Rogers is both a long-time writing friend and a fellow Charisma/Realms author. 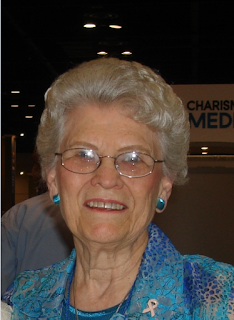 Welcome, Martha. Since you’re being published regularly, what new avenues will your future books take?
I have a new series planned also set in Texas that will be about a quest for treasure left by a great-grandfather for three great-grandchildren to find who discover an even greater treasure of love.

What conferences will you be attending this year? Will you be a speaker at any of them?
I’ll be conducting two workshops at the Texas Christian Writers Conference in August here in . Then I will attend the ACFW conference in in September.

If you were in charge of planning the panel discussion at a writing conference, what topic would the panel cover, and who would you ask to be on the panel, and why?
Several topics come to mind. If it’s for new writers, I would say a discussion of how to make manuscripts attractive to editors and how to pitch them. That panel would include authors and editors: Colleen Coble, Brandilyn Collins, Ami McConnell, Kim Moore, Sue Brower, James Scott Bell, and Randy Ingermansson would be good have on the panel.

How important is it to you to be active in writing organizations?
To me it’s very important. Making contacts with other authors, feedback from others about your work, meeting and making new friends in the writing world, and attending workshops to learn more about the craft of writing are all good reasons for being a part of a writing group, whether local or national.

Where in the community or your church do you volunteer?
We’ve been members of ’s First Baptist church for over 50 years. I sing in the choir, co-lead a weekly First Place 4 Health class and I’m a group leader for a weekly Bible Study, Grace Walk.

Who are the five people who have made the most impact on your life, and how?
My husband because he believed in me and my writing and supported me.

Marge Caldwell set an example of a life well-lived for Christ and gave me very good advice.

My paternal grandmother, Lella Whiteman who taught me the importance of having a personal relationship with my Lord and Savior.

DiAnn Mills because she took me under her wing and mentored me in the early days of my writing career, and she also introduced me to Kathleen Y’Barbo Turner and Janice Thompson who have become close friends of mine.

Tamela Hancock Murray, my agent, contracted me as an unknown and worked with me and believed in me all these years.

If you could write the inscription on your tombstone, what would it be?
Martha Rogers:
1936 - ??
She lived the “Dash” well.

Tell us about the featured book.
The featured book is a fictionalized account of my great-grandparents’ love story just after the close of the Civil War. He was a POW at , , and the story is of his journey home to his true love, Sallie, in . Real names, places, and events are all a part of this historical novel.

Please share the first page with us.
Monday, April 10, 1865
Cold air chilled his arms and a sharp object poked at his cheek. Manfred Whiteman reached down to pull a ragged blanket up over his arms and brushed away the straw scratching his face. A few moments later a sudden brightness aroused him again. His lids opened to a slit. Slivers of sunlight peeked through the tiny windows and dispersed the shadows of the night.

He shut his eyes against the sun’s rays, but sleep would not return. He lay still in the quiet of the new morning and sensed a difference in the air that settled over him like a cloak of peace. Raising his head, he glanced around the room. The same familiar stench of wounds, dirty hay, unwashed bodies, and death permeated the air, but in it all, the difference vibrated. Something had happened, he could sense it, but nothing unusual appeared in the confines of the prison barracks.

After being captured in the Battle of Nashville in December, he, his younger brother Edwin, and other prisoners had made the long march from to . From there they were transferred to in . Then, in the first week of February, they had been loaded onto trains like cattle and sent to , a prison housing nearly fifty thousand men. Upon their arrival, the captured soldiers had been stripped of everything personal, and as the days progressed, hundreds of men died. Manfred mourned the loss of friends, but thanked the Lord every day for sparing his life, as well as the life of his brother.

Edwin lay sleeping on the pallet next to him, curled on his side as usual. Others still slept, their snores filling the air with sound. No use in trying to sleep now. Manfred’s stomach rumbled with hunger, but most likely the only breakfast would be hard tack or biscuit.

Where can my readers find you on the Internet?

Thank you, Martha, for sharing this new book with us.

Posted by Lena Nelson Dooley at 6:43 AM

Thank you so much for this giveaway. I have been wanting to read some of Martha's books.
Amy C
VA

Love that epitaph. Great post. Thanks for the chance to win!

I would love to win. Angela from KY

Martha, I would love to read this, especially due to the tie in with your grandparents! What a great way to honor them! Jeanie in Phoenix

Thanks for stopping by. A lot of research went into this book that began as a simple story to share with my cousins. We kept brainstorming and thinking "what ifs" until I had to make it into a novel.

How neat that Martha's own family was the inspiration for the story!

I have read several of Martha Roger's books and loved them all. I can't wait to read this one!

I would love to read this.

Wendy Newcomb said...
This comment has been removed by the author.
7:02 PM

I love that it's based on her great-grandparents! Gotta read it now :)

Like that the book is based on her family's personal experience and grandfather was a POW. Love to win the book. sharon, ca

Thank you for the first page. So heart felt. LOVE STAYS TRUE is a must read for me.

sounds like a wonderful book thanks for chance to win

thanks for the chance to read this wonderful story

I like that this is based on a true story! Thanks for the giveaway!

I would love to win a copy of Love Stays True. Thank you for the post.

I love stories based on true events! I'm in MN.

I would love to win a copy of, Love Stays True.

Thanks for the opportunity to do so.

Martha, I love the inscription you chose. I would be happy to win a copy of your latest book.
I live in Tennessee, which is quite lovely this evening.

I would enjoy reading this book. Sounds like a great setting after the Civil War.
Beth from Iowa

We have Martha's books in the church library.
I would love to win this one for our collection.
Thanks!
Janet E.
von1janet(at)gmail(dot)com
Florida

Sorry I haven't been back before now. This was a busy week. Had supper with one of my cousins in Georgetown, Texas on Friday night. We talked about the fun we had doing the research into our family history. I wish all of you could win a copy, but I'm anxious to see who does win.

Thanks, Lena, for hosting me.

I'm in! Kandra in OK