Dear Readers, I was privileged to read Gabriel’s Atonement for endorsement. Here’s what I said:

“I’ve long known about Vickie McDonough’s interest in history, especially the land runs. She took the details of history and skillfully worked them into the lives of her characters, who leapt off the page and grabbed my heart. Using several plot lines that could have been ripped from the pages of history, she wove them carefully together to give an interesting and thoroughly satisfying tale. You won’t want to miss this wonderful read.” 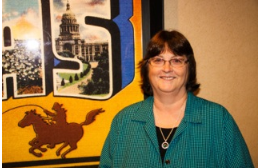 Welcome back, Vickie. You have a lot of books out now. What is your favorite setting to use in your books?
I’ve enjoyed writing about my home state of in my Land Rush Dreams series, but I keep going back to for book settings. has a much longer history than , and it’s a great setting for a story and popular with readers.

What do you look for when you’re shopping for a book to buy for yourself?
I usually gravitate to the historical fiction section and look for something with a western setting or cowboy on the cover. I fell in love with cowboys and westerns when I watched TV with my dad when I was a kid. I prefer stories set in the late 1800s.

Give us a little tour of the setting for this book.
Gabriel’s Atonement, Book 1 in my Land Rush Dreams series, starts out in southern , but moves into the when my hero and my heroine’s family prepare to ride in the first land run. Readers also get a glimpse of the settling of the city of , which was the first capital. The town was a prairie water station for trains on the morning of April 22, 1889, but by evening, it was a massive tent city with a population around 10,000 people. It was a fascinating time in ’s history.

What other books do you have coming out soon?
In June, I have a novella releasing called The County Fair Bride, which is part of The 12 Brides of Summer Collection. In September, the print version of The 12 Brides of Christmas will be available. It includes my novella, The Fruitcake Bride. The ebook version was released last fall. Then in November, Joline’s Redemption, Book 2 in my Land Rush Dreams series releases.

Please give us a glimpse inside your home.
I’m currently sitting in my living room in my recliner, using my laptop, which sits on a lap desk. My couch and pair of recliners are gray. I have teal pillows on the couch and dark teal valances on the windows and a dark teal glider rocker sitting next to our TV. The Berber carpeting is a dark green and white. There’s a fireplace on one wall. You pass through the living room to get to our kitchen and dining room, which are at the back of the house. Our house is two-story with a vaulted ceiling that goes all the way up to the second-story ceiling in the living room. The staircase has a curved wall, giving the room added character. One bedroom is downstairs and two more and an office are upstairs. The people who lived here before us built a third-story loft in the attic, which now serves as my husband’s office.

Is this novel part of a series or a stand-alone book?
Actually, it is both. Gabriel’s Atonement is part of the Land Rush Dreams series, but it is a complete story on its own. Book 2 features Jo, who in Book 1, is the bratty younger of Lara, the heroine. I’ve just started Book 3, which features characters you’ll meet in the Joline’s Redemption.

I love it when a series has stand alone stories in them. Tell my readers about the story. 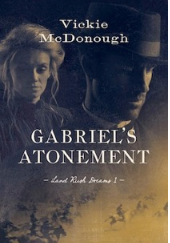 Gabe Coulter has a successful night gambling, but a drunken cowboy who wants his money back confronts him in a dark alley. Gabe refuses to returns the man’s money, and a gunfight ensues. The dying man tells Gabe the money was for his wife and son. Though the shooting was self-defense, Gabe wrestles with guilt. The only way he knows to get rid of it is to return the money he fairly won to the man’s wife.

Lara Talbot sees Gabe as a derelict like her husband and wants nothing to do with him. But as she struggles to feed her family, she wonders if God might have sent the gambler to help.

Please give us the first page of the book.
The cool metal of the Morgan silver dollar warmed as it rolled over Gabe’s knuckles and between his fingers. One thing he’d learned in the last nine years was how to read people, and the cocky cowpoke at the bar looked ripe for the picking.

Like an early morning fog, hazy smoke floated in the saloon’s tepid air. The cowpoke swigged back his drink and slammed his shot glass onto the counter, patted his pocket, and looked in the direction of the gaming tables. Gabe caught his gaze and nodded.

With a leering grin, the cowboy brushed past Trudy, one of the buxom saloon girls, and strode across the room toward Gabe. “I’m of a mind to double my money.”

“Are you now?” He leaned back in his seat, one arm over the back of the chair, and waved a hand. “Have a seat,” he hollered to be heard over the din of the crowd. He recognized the man from a month ago when he lost his paycheck at Tricky Dan’s table. If he remembered right, the cowboy worked for Walt Whiteman, owner of the largest cattle ranch in the area—and the best paying one.

“The name’s Tom Talbot.” He nodded and pulled a pouch of coins from his pants pocket.

Slim and Will McDaniels, two other regulars, pulled out chairs and joined them. The tinny music of the piano mixed with masculine laughter and chatter as men at each table talked loud enough to be heard over the racket. With his thumb and forefinger,
Gabe slowly pulled his pistol out of his jacket holster as usual and laid it on the table—a sign that he brokered no funny business. Two hours later, the cockiness had gone out of Talbot’s blue eyes, replaced by disbelief at the first hand he lost, and then simmering anger as he tossed the last of his coins into the pot. Gabe had seen that look many times in his years as a gambler, even felt it himself often in the beginning of his career. But he couldn’t tell who Talbot was angry at—himself or Gabe.

Talbot ran a shaky hand through his disheveled, curly blond hair and shoved away from the table. “That’s it. I’m broke.” Slim pushed up from the table. “Guess that pretty wife of yours ain’t gettin’ no money again this month.”

Talbot grabbed the man by the collar. Gabe rested his hand on his pistol and watched. With a loud growl, Talbot heaved Slim backward into the wall. Then he turned and sidestepped, bumping into a barmaid, and wove his way to the exit. The double saloon doors banged and remained swinging as Talbot lurched outside.

Thank you, Vickie, for sharing this new book with us. I know my readers will love it as much as I do.

Posted by Lena Nelson Dooley at 7:04 AM

A gambler with a conscience? Sounds like an interesting premise for the story. Would love to win this book!

Sounds so good! I live in NW Washington State! :) jenalunde at yahoo.com

Jenalunde and J.C., If you enjoyed the movie Far and Away, you'll probably like Gabriel's Atonement.

I've been reading such good things about this book. Lot's of good comments too. I'd so wanting to read this book :)
dkstevensneAToutlookD OtDo M
Dee from NE

A fascinating story line thank you.

I would love to win a copy of Gabriel's Atonement. Thank you for the chance to win.

Lena, has anyone told you lately that YOU ROCK?!!! You feature the most interesting authors. I loved her room! Thanks for the opportunity to win this novel. I've been reading novellas set during this time and am fascinated about it.
Marianne
Arizona
mitziUNDERSCOREwanhamATyahooDOTc

Sounds like an interesting story! Thanks for the chance to win.

Thanks, everybody, for your kinds comments about Gabriel's Atonement. The Oklahoma land runs were an interesting and unique part of American history.

I just went and checked out the reviews for this book. Everyone seems to love it. I must admit that I have not read anything by this author but would be delighted to give her a try.
Please enter my name in the drawing to win a copy of Gabriel's Atonement.
Thanks!!
Cindi Altman from Pennsylvania.

Marianne, thanks for thinking I rock.

Cindi, you'll be glad you checked her out, and I'm sure you'll become a big fan.

I love reading historical fiction, especially those books about the settling of the American West. I think this fits the bill.

Enter me for your awesome book!!! You are one of my favorite authors.
Conway, SC.

Oh my! I am hooked and definitely want to read this story!
Tennessee

Thanks for visiting Lena's blog and checking out my interview, everyone. Gabriel's Atonement has been well received among those who've read it. The land rush days in Oklahoma Territory were an interesting and exciting time.

For anyone who's interested, I'd love to have you sign-up to receive my newsletter. You can do so by visiting the Home page on my website and clicking on the wanted poster.

Vickie McDonough said...
This comment has been removed by the author.
10:30 AM