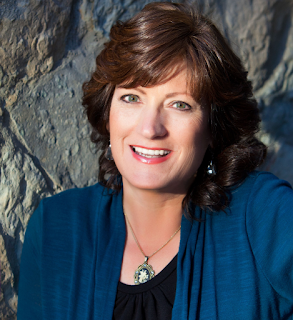 Welcome back, L R. By the way, I love your author photo. What are some of the spiritual themes you like to write about?
For my historical fiction I emphasize salvation by faith alone through grace alone—to show that it can’t be earned by being religious. In the early 19th century in , which is an era I write about, Church membership and attendance was thought to suffice for one’s spirituality. So bringing the message of true faith to that backdrop works to highlight its simple truth. In my contemporary novels, I also emphasize the simplicity of the gospel. I never imply that living out a life of faith is easy, but that salvation is never more than a prayer away—for the heart that is sincere and turns to Christ.

What other books of yours are coming out soon?
With the completion of , The Pulse Effex Series is now a trilogy, so I’m turning my focus back to regency romance for the time being. The next regency ought to be out by around June of 2018, if not sooner.  I hope to follow that with a couple of other romances, both historical and contemporary, that are in the works right now. 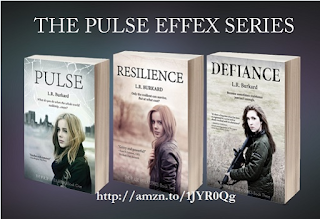 If you could spend an evening with one contemporary person (not a family member of yours), who would it be and why?
Amy Grant. I’ve been an Amy fan since my college days and I always felt Amy and I would hit it off as friends if we met. I actually botched a real opportunity to meet her—at her invite! (via her management company)—to my sorrow. But I would love to meet her and talk a night away together.

What historical person would you like to meet (besides Jesus) and why?
Well, as a Jane Austen fan, I look forward to meeting Miss Austen in heaven, but I’m not certain I’d want to meet her on earth. Why? Because she possessed a caliber of intelligence probably quite beyond my own. I’d be afraid of boring her, to be honest. I don’t doubt that if she had been less polite and more in society, her reputation would have mirrored Oscar Wilde’s for ready wit and brilliance. As it stands, Jane was polite—in public—and sometimes surprisingly cutting in her private remarks (which we know from surviving letters). If I could, I’d love to observe her at a public gathering—from a safe distance—until I gathered my courage and dared approach her!

How can you encourage authors who have been receiving only rejections from publishers?
There are real reasons for authors to be encouraged by rejections, and here are two: One is that they are in good company. A bona fide writer gets rejections. Nearly every famous writer throughout history has had to face them. So it’s really a rite of passage. In addition, a rejection is merely a notice that they haven’t found the right home for their work yet. It does NOT mean that home doesn’t exist. So they have to keep trying.

The second reason to be encouraged is that publishers are no longer the only gatekeepers of what gets published. As long as an author’s work has been thoroughly edited and rewritten until it shines, self-publishing is a viable option. It’s a different path with its own set of challenges and shouldn’t be embarked upon lightly, but after counting the cost and studying best practices, self-published authors today can do just as well if not better than traditionally published authors.(A word of caution: It is far easier to get one’s book out there via self-publishing, but in most cases far more difficult to get as wide a distribution as traditional publishers have access to. ) 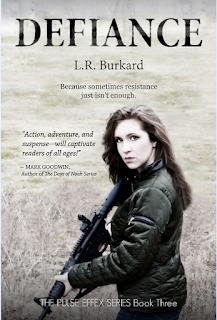 Tell us about the featured book.
is book three in the Pulse Effex Series, which shows the aftermath of a catastrophic EMP (electromagnetic pulse) as seen through the eyes of three teens and their families. It’s a cautionary tale, a survival tale, and a journey of faith in very dark times. The response from people who usually don’t read YA/suspense has been wonderful—the first book hooks them, and they’re really glad to have read about what life could look like if an EMP were to really happen. Part of my motivation was to help the church get prepared for just an event—or one like it. I felt moved by the Lord, actually, to write this series.

Please give us the first page of the book.
I think your readers would enjoy the SNEAK PEEK from the front of the book, first. Which I’ll follow with the first page.
SNEAK PEEK
Angel took a handgun out of a side holster and handed it to me. “We’re gonna need you, Sarah.”

“Just aim and shoot when you need to,” she said, quietly. “It’s already chambered. Remember what we taught you—when a bullet’s chambered, it’s ready. Don’t aim it until you’re gonna use it and don’t put your finger on the trigger until you’re gonna shoot.”
“Here they are!” Richard cried.

The gang of marauders appeared, descending upon the cabin with hoots and shouts that made my blood curdle.  I took the gun with a sense of unreality. How could this be happening? It couldn’t be, because I, Sarah Weaver, did not take part in real battles! Sarah Weaver was an anxious, fear-filled teenager with enough insecurities for ten girls. I was the one to have panic attacks when alone; the one who’d been taking anti-depressants for two years—until the pulse stopped that.

I held the pistol up with shaky hands. And I knew: This was reality now. This was life, and there was no room for the old Sarah. I could not allow myself to crumple in weakness or fear.

PAGE ONE
I saw him through the morning fog, appearing like a phantom out of the haze. You’d think the sight of a man approaching through the field would send me scurrying to the house in alarm. You’d think it would have me shouting for Angel and to come with rifles at the ready. But I knew who it was. I recognized the wearied determination. That deliberate walk.
But not at first. I’d been out at dawn fetching the morning’s water at the pump. I froze when he came into sight, my heart thumping with fear. People were about the scariest thing you could encounter these days. Then I saw: Richard! He’d left me here at and Angel McAllister’s homestead three weeks ago. When he left without a word to any of us, the McAllisters let me move from the barn loft to their living-room so I wouldn’t be alone at night.
See, the McAllisters took us in, letting us sleep in the barn. After the EMP knocked out the electric grid in the dead of winter seven months ago, we were forced from our apartment by a building fire. At first we’d taken shelter in the town library—everyone from our building did. But the library was dirty and crowded, and we were slowly starving. As soon as the weather allowed, we took off to make our way to Aunt Susan’s farm. It was a treacherous journey and we never got there—instead, we ended up here with and Angel. They were wonderful to me and extra kind since Richard took off. But I missed my brother.

A huge lump filled my throat when I saw how defeated and beaten he looked. But I swallowed it and slammed down my half-filled bucket, and ran. I barreled into him, crying on his shirt.
“Hi, sis.” He wrapped a weak arm around me. Poor Richard! He must have endured a lot out there.

And thank you, Linore, for allowing me to introduce my readers to this series.

Readers, here are links to the book. By using one when you order, you help support this blog.
Defiance: A Post-Apocalyptic YA Tale of Survival (The Pulse Effex Series) (Volume 3)

If you’re reading this on Goodreads, Google+, Feedblitz, Facebook, Twitter, Linkedin, or Amazon, please come to the blog to leave your comment if you want to be included in the drawing. Here’s a link:
Http://lenanelsondooley.blogspot.com
Posted by Lena Nelson Dooley at 11:32 AM

No need to enter me....just wanted to say that this series is fantastic! These characters will be with me for a long time.

This is a new author for me. The books sound great.
Dianna in TN

Thanks, Chappy Debbie! I love a satisfied reader.😊
And thank you, Dianne, for checking out the post.

Would love to read this book. This is a new author to me.

I'd like to be entered, please :)
Great interview, and thank you for the giveaway!
Raechel in MN

Defiance sounds like a book that will have you sitting on the edge of your seat and not wanting to put it down so you can read to see what happens. Would love to win a copy!

Thank you, Cindy, Rechel, and Vivian. I'm so glad you saw the post. Vivian, your comment reminds me of what a great many reviewers kindly wrote about the book on Amazon: that they couldn't put it down! Best of luck to you all. For those who don't win a book here, I do a monthly drawing for free books from my newsletter subscriber list. You can join the list at either of my websites. http://www.LinoreBurkard.com, or the Pulse Effex companion site: http://www.LRBurkard.com. Thanks again!

Sounds like an incredible series! Thank you for the chance.

I am excited to read this series. Thanks for sharing.
Blessings!
Connie from KY
cps1950(at)gmail(dot)com

My daughter and I were just discussing that Christian books can be as awesome as secular books with varied themes and compelling plots - all without the worldly point of view but instead drawing us closer to God. I would love to win this book to give to my daughter. Thank you for this opportunity.

Thank you, Carol, Connie, Sharon and Cheri. And for all who entered, if you don't win here, there's another giveaway posted on my FB page. And don't forget my monthly drawings through my newsletter. God bless!