Bio: Lori Benton was raised east of the , surrounded by early American history going back three hundred years. Her novels transport readers to the eighteenth century, where she brings to life the Colonial and early Federal periods of American history. When she isn’t writing, reading, or researching, Lori enjoys exploring and photographing the wilderness with her husband. She is the author of Burning Sky, recipient of three Christy Awards, The Pursuit of Tamsen Littlejohn, Christy-nominee The Wood’s Edge, and A Flight of Arrows.
Find out more about Lori at http://loribenton.blogspot.com. 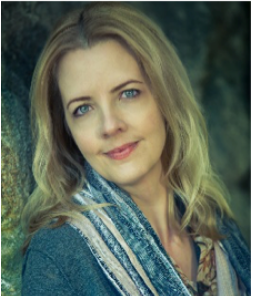 Welcome, Lori. Tell us how much of yourself you write into your characters.
I believe every character I write is a part of me—I’m not sure it could be otherwise—but of course some characters are more like me than others. That said, I never intentionally write “me” into any of my characters. I believe it’s a process that happens organically and I’m only aware of it as I look back on their creation.

What is the quirkiest thing you have ever done?
Well, I guess quirky is in the eye of the beholder… or committer! Some might call taking your bow out into the mountains to target practice on the beer and soda cans hunters leave scattered around in the fall a quirky thing. I think it’s perfectly normal!

When did you first discover you were a writer?
When I was about nine years old. My best friend wrote a story and showed it to me. I was an avid reader, but it had never crossed my mind to write a story myself. It seemed like something too fun to pass up, so I wrote one too. I’ve been writing, more or less ever since.

Tell us the range of the kinds of books you enjoy reading.
Wow, it’s pretty wide. I’ll read Christian fiction of nearly every genre, mysteries, nonfiction of nearly every type, historical fiction, YA dystopian, and time-travel stories, just to name the genres off the top of my head. I’m sure there’s more. And I love audio books!

How do you keep your sanity in our run, run, run world?
By getting away from it all for personal retreats to seek the Lord. There really is no other way. If I’m near the computer then the work is always calling to me.

How do you choose your characters’ names?
It varies. Sometimes they come with their names attached and I have no idea where they got them! Other times I search and search and it takes trial and error. I read old ship manifests, delve into my family tree (it goes back to the 1600s in this country alone), watch the credits on movies filmed in the country where my character hails from, the names of actors, producers, directors, writers on TV shows as they are coming on. I have my antennae up all the time, waiting for the right name to come along.

What is the accomplishment that you are most proud of?
Signing my first book contract after 20 years of working toward that goal.

If you were an animal, which one would you be, and why?
Perhaps a lion. They get to sleep a lot, and they have nice hair.

What is your favorite food?
Not sure I have a favorite. I seem to make tacos a lot for dinner though!

What is the problem with writing that was your greatest roadblock, and how did you overcome it?
Writing concisely. I learned how to deal with it (not overcome it, I still do it) after a writer friend took one of my bloated, over-written manuscripts in hand and slashed it to bits with her digital red pen. When I saw what she felt could be cut and realized I wasn’t really losing anything vital to the story by its omission, I took it even further and reduced a nearly 400,000 word manuscript to about 125,000 words, without losing more than a scene or two. Yes, I do mean 400K. I’m not kidding when I said I overwrite my first drafts. I still do. Just not that badly. 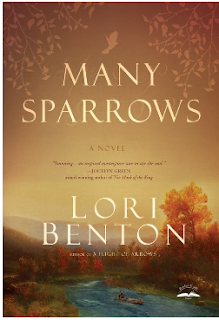 Tell us about the featured book.
Many Sparrows (WaterBrook Multnomah August 2017)
When settler Clare Inglesby is widowed on a mountain crossing and her young son, Jacob, captured by , she’ll do everything in her power to get him back, including cross the and march straight into the presence of her enemies deep in Indian country. But not alone. Frontiersman and adopted , Jeremiah Ring, promises to guide Clare through the wilderness and help her recover Jacob. Once they reach the and discover Jeremiah’s adoptive sister, Rain Crow, has taken custody of Jacob—renaming him Many Sparrows—keeping his promise becomes far more complicated, the consequences more wrenching, than anyone could have foreseen, and Clare faces her greatest challenge. Can she be still and let God fight this battle for her?

Sounds really interesting. Please give us the first page of the book.
May 1, 1774
Ohio River near Yellow Creek
Jeremiah Ring had witnessed death as often as the next man on the Allegheny frontier, but in all his thirty years he had encountered no deaths more dismaying than those confronting him now.

The dead had been laid on the wet spring earth near Joshua Baker’s tavern and trading post, made as decent as such desecrated bodies could be. Now the living moved among them as men whose joints had aged a score of years, tongues held captive by grief and outrage. Jeremiah’s friend, the Mingo, Logan, wept in silence beside the body of a young woman, his sister Koonay.

Jeremiah felt his gorge rise as it had at first sight of Koonay. Someone had draped a blanket over her after cutting her down from the tree in which her body was found hanging, but they’d all seen what was done to her. Koonay had been heavy with her second child, but not even the unborn had escaped this slaughter. No one had yet found her firstborn, a daughter, two years old, though they knew she’d been with her mother in one of the canoes that crossed the to Baker’s post, a thing done in friendship many times before.

It wasn’t only Koonay whom grieved. Jeremiah choked back his own sorrow, watching the man absorb the slaughter of nearly all the blood kin he’d had in this world—his older brother, his mother, his nephew, his sister, her unborn child. The few warriors who’d accompanied them, slain along with his kin, had been ’s friends.

Here’s a link to the first two chapters:   http://waterbrookmultnomah.com/wp-content/uploads/2017/07/Sneak-Peek-MANY-SPARROWS.pdf

- Amazon
Many Sparrows: A Novel - Kindle

Email ThisBlogThis!Share to TwitterShare to FacebookShare to Pinterest
Labels: Lori Benton, Many Sparrows

Many Sparrows does sound complicated just from reading about the story. Would enjoy reading this to see how it ends.

This sounds like a very interesting book...one that I would love to read. Thank you for the chance to win a copy.

I have not read any books by Lori Benton yet. I've read reviews and her books sound excellent. I am most interested in reading historical fiction and I enjoy readng about Indians in books. I used to read Cassie Edwards when she was publishing still.

This book sounds so fascinating. I haven't read any of Lori's books yet, but I've heard so many wonderful things about them. I'd love to win a copy.

I always enjoy history and have read quite a bit, in general, of that time period, partly in doing family genealogy/history. Thank you for the interview, as this sounds a very interesting book, and a new author for me to follow. I have not previously read anything by Lori. Thanks from TX

I am intrigued by Lori's book and would love to read it. Thank you for this opportunity.

Connie Porter Saunders said...
This comment has been removed by the author.
6:43 AM

This first page is riveting. Thank you for sharing.
Blessings!
Connie from KY
cps1950(at)gmail(dot)com

I have two of Lori's book waiting for me on my shelf. I would love to add this one! Thanks for a great interview. Paula from Missouri.

Karen from Oklahoma. I love Lori's books and this sounds intriguing

I have yet to read anything by Lori and would love to win a copy of her book. I love the beautiful cover, and the story sounds intriguing.
Vangie from NC

This book sounds great! Thanks for the chance!
-From Quebec, Canada

I have read all of Lori's published books and absolutely love them. She is a "must read" author for me. I'd love to win a copy of Many Sparrows.

Love Lori's books and can't wait to read this one. Thanks for the chance to win!

Lori writes the best historical fiction! Her first novel Burning Sky is one of my favorites.

I've read most of Lori Benton's books and loved them. This was a really fun post to read!

Forgot to say that I'm from Kansas City, Missouri

I am reading my first Lori Benton book - Burning Sky - and I can't put it down. the story draws me in and I feel like the characters are my friends.

Amazing! I've been waiting like forever to get the chance to read one of Lori's books.

Much love from Romania!
ddoru_05(at)yahoo(dot)com

I've heard SO many GREAT things about this book, I've been LONGING to read it!!!! :)

I'm really looking forward to reading this book - I enjoy learning about different periods in history.

I'm in Pennsylvania. Thank you for the giveaway chance! It sounds really interesting.