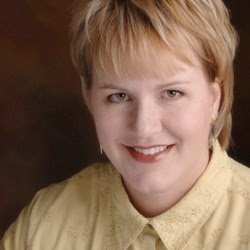 Welcome, Lisa. I've been waiting anxiously for the release of this book. What are some of the spiritual themes you like to write about?
The thing I try to work into every book I write is a message about God’s love and care. I think it’s a theme that all people need to hear repeatedly.

What other books of yours are coming out soon?
The second in the Grand Tour series, GRAVE CONSEQUENCES, is coming out Spring 2013, GOD GAVE US EASTER (a children’s book) and UPSIDE-DOWN PRAYERS (a devo) are coming out then too.

If you could spend an evening with one contemporary person (not a family member of yours), who would it be and why?
Jim Gaffigan, a comedian, because I like to laugh.

What historical person would you like to meet (besides Jesus) and why?
C.S. Lewis. I’d love to just sit and listen to him think aloud…

How can you encourage authors who have been receiving only rejections from publishers?
Keep that chin up and see if there are improvements that can be made to your manuscript. I’ve never seen a book that’s totally done—meaning, there are ALWAYS improvements and fixes we can make. So take the opportunity to go through it yet again, seeing where God is directing you. These days, self-publishing through e-books and POD printing is a great option. With traditional publishing opportunities narrowing, trying your hand at self-pub is pretty cool…just don’t invest too much. Don’t get sucked into paying a lot, because you can do it for less than $250 yourself. Some things you may want to invest in—a professional cover; editing; someone to format it for the three different kinds of ebooks. But weigh those expenses carefully.

Tell us about the featured book.
TRIBUTARY is the continuation of the of , a YA time travel series about two modern girls who end up in medieval (WATERFALL, CASCADE, TORRENT, BOURNE, TRIBUTARY). It’s available as it’s own e-novella or combined with BOURNE, the e-novella that preceded it, in e or in paperback later this month. In TRIBUTARY, Gabi and Marcello face an unexpected crisis, Lia is embroiled in some post-traumatic stress that holds her back in critical ways, and Lord Greco just might find himself falling in love…

Please give us the first page of the book.
She was gaining on him. She leaned hard, pulling on the reins, leaning around a giant oak to pick up his trail again. There! She glimpsed his brown, furry rump, the speck of hooves as the boar dived into the bramble, hoping to lose her.

But he would not lose her. She’d tracked him for hours, losing his trail and then picking it up again. Through two woods and a creek. All she could think of was bringing him back to the villa, tied over her gelding’s back. Cooking fat chops over the fire, Papa curing the hocks. Eating their fill, for once.

Ever since the battle, times had been terribly hard in their house. Her brothers, gone. No beau, coming around to court her. She and Papa circled each other, uneasily, neither of them sure how to proceed as family, alone. But summer was almost upon them. Hope surged. And this boar was a symbol of that new beginning.

She ignored her thirst, nagging at her for hours, and leaned forward, urging her gelding to give his last to the effort. She knew the horse was weary, desperate for drink, but they almost had him! The boar grunted and then squealed as she closed the distance between them. He had to know that his moments were short.

She pulled the brim of her father’s hunting hat low, and lifted her spear in hand, concentrating on naught but the boar, seeing it on a roasting spit this very night, her family washed, ready, eyes bright with hope…

“A rider approaches, hard,” Luca said, glancing over at me and Gabi.

“Only one?” Marcello asked. “Are you certain?”

Luca and Lord Rodolfo Greco listened, together, and then shared a long look and brief nod. Still, they edged over to me, Marcello and Gabi, slowly drawing their swords in a protective stance. We were in a clearing, the woods fading for a moment, the shock of a threat startling us all. Things between and had died down. A skirmish here and there, but nothing like last year. We’d settled into the peace, like a new snow covers the ground.

As the rider drew closer, we tensed, bracing ourselves. I ran my hand over the curve of my bow, but resisted the urge to nock an arrow. It was only one rider. What harm could be coming our way? That three of ’s finest couldn’t handle? Not that I was really ready to shoot anyone again. Not since—

I heard the snort of a boar, then glimpsed the hunter, a bit of a man—a boy?—but still coming at a full gallop, long spear in hand, heading straight toward my sister. Did he mean to—

“Gabi!” I shouted, as the men shouted too, moving to intercept him.

But the boar emerged then, running between our horses, making Gabi’s mare rear and Luca’s shy, whipping him around in a circle.

But I was too late. Rodolfo charged, angling himself so that the hunter would hit him instead of my sister. He swung his sword, hitting the tip of the intruder’s spear, sending it flying. The hunter’s horse collided with his, faltered, then went down, while Rodolfo held his seat.

“He was hunting! Only hunting!” I yelled, as all three men dismounted and approached the slight man, swords drawn. Confusion filled their eyes. The hunter lay frightfully still.

Thank you, Lisa, for sharing this book with us.


Readers, here’s a link to the book. By using it when you order, you help support this blog.
Tributary (River of Time 3.2 Novella)

WOULD LOVE TO WIN. ANGELA FROM KY

This sounds great!! I love time travel and this sounds like something I could share with my kids.

thanks for the interview/giveaway!!

Just reading about this series and it sounds great! I'm sure my daughter we would enjoy them as well!

I'd definitely love to win this book.

This book sounds great and I would love to win it! I live in Wa State and right now it is nice and sunny!

Looks great! Please enter me in the drawing. Portsmouth, VA

Lisa - Congratulations on your Christy Award! Would love to win a copy of Tributary for our church library (after I read it first, of course!).
Sharon from Eagan MN

Sounds great. What a good blog you have here, Lena!