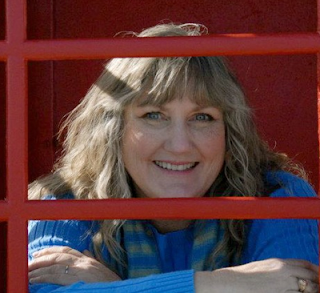 Welcome back to my blog, Kathleen. As an author, I know it takes a lot of people to birth each book. Who were the people involved in the birthing of this book, and what were their contributions?
My editor Emily Rodmell was instrumental in every step of the novel from its inception to the final publication. My husband, Robert Turner, read every word of the novel and helped greatly with characterization and edits.

If you teach or speak. What’s coming up on your calendar?
I am on holiday hiatus, but I do have some events on the calendar for 2013. In February I will be teaching on social media at the Oklahoma Chapter of ACFW, and in March I am teaching two workshops at the NOLA Conference in .

If you had to completely start over in another place, where would you move, and why?
I already did this, actually. In 2010, I left —my home of 15 years—to marry my Tulsa-based husband.

I remember that wonderful time. If you could only tell aspiring novelists one thing, what would it be?
Write. It is so easy to get involved in the other aspects of writing—meetings, critique groups, and conferences—and forget that until you actually complete a book, you have no chance of seeing it published. So write. Regularly.

You’ve been asked to be in charge of a celebrity cruise. Who would you ask to take part, and why? (AS in what program, singers, etc. [it doesn’t have to be writing related])
Wouldn’t it be fun to do a television show themed cruise? Something with the cast and possibly an interactive with those on the boat. So, what about a Castle cruise? Maybe NCIS or Dr. Who? The possibilities are endless, aren’t they?

HER FIREMAN (Love Inspired) From his first encounter with the feisty redhead, widower and fire marshal Ryan Owen knows he's in trouble. He's in to heal, not to find romance. As for Leah Berry, she's come home strictly to lay claim to her family's restaurant and fend off developers. Leah is infuriated when Ryan shuts down the restaurant on violations. Both are determined to have their way, even as something unexpected starts blossoming between them. They'll need to learn the hardest thing about love and faith-letting go.

“Leah, somebody needs to tell the guy at table seven that we closed twenty minutes ago. He just ordered another plate of fried shrimp then had the nerve to ask me to bring him a dessert menu.”

Leah Berry looked up from the list she was making to see the offending customer. Dark hair, muscles, and a leave-me-alone expression marked him as a guy who wasn’t expecting company.

Or, apparently, to hurry even though the sign on the door was clearly marked with the news that Pop’s Seafood Shack was only open for lunch on Wednesdays from the first of November through the end of the year.

Much as Leah needed to get over to the stables and see to the horses, it wasn’t worth losing a customer over. If she’d learned anything since she left her curator’s job at The Galveston Preservation Society last spring to run the family restaurant, it was that the customer came first.

“Be nice and go fill his tea glass,” she said firmly. “And smile when you hand him that menu.”

The waitress, barely out of her teens and more set on a modeling career than one in food service, opened her mouth to complain then obviously thought better of it. While Kate had been a star pupil Vine Beach High, she hadn’t taken to the skill of being a waitress with the same gusto.

But she was local to and willing to work for what the restaurant could afford to pay her during the winter season, two qualities that insured she would have a job, at least for the foreseeable future. Then there was the fact that her father was the mayor of and an old friend of Pop’s. Much as Leah hoped Kate Murdoch made a success of her modeling dreams, she didn’t wish for it to happen soon.

Grabbing a menu with one hand and the tea pitcher with the other, Kate wound her way through the maze of tables to where the stranger sat staring out at the view of the Gulf beyond the wide expanse of windows. By the time Kate sat the menu down, he’d offered the waitress a nod then gone back to gazing out at the water again. Leah watched to make sure the future super model offered no evidence of her irritation before going back to her counting.

“I told you we needed a rule about ordering all-you-can-eat in the last hour before
closing,” Kate said when she breezed past to deposit the empty plates. “He’s picking at the shrimp and staring out the window. Seriously. I’m so over this.”

“He probably just doesn’t realize we’re only open for lunch on Wednesdays,” she offered to Kate’s retreating back.

Orlando, her father’s best pal and the only cook Pop’s Seafood Shack ever had, stepped into her line of sight. Arms crossed over his barrel-chest, seemed to study the US Navy tattoo on his forearm before lifting his gaze to meet Leah’s stare.

“What?” she asked softly as she once again set her work aside. “We hold the kitchen open until the last diner’s done. House rules, even on Wednesday. You know that.”

“Don’t get all riled up, Lee-Lee.” The cook went back to studying the inked insignia as he managed a shrug. “Just thinking of the bottom line. Overtime for the two of us plus all that food the guy’s putting away means you’re losing a whole bunch of money. I’d put up the closed sign and flash the lights, if it were up to me.”

Oh, goody, a story set on . I love that setting. Where can we find you on the Internet?
www.kathleenybarbo.com, on Twitter at KathleenYBarbo, and on Facebook

Readers, here are links to the book. By using one when you order, you help support this blog.
Her Holiday Fireman (Love Inspired)

Looking forward to reading Kathleen's book. I am an Indiana resident, but spend much of my time in Ontario on the banks of Georgian Bay where I write.

I enjoy reading the small love inspired books and I have read Kathleen so know this will be a good read, I like stories that are about beach areas and a big handsome fireman will make it even more so...thanks for sharing.

i would love to win this book. Lena and Kathleen. Thanks for the great interview and giveaway. Love to read about people in uniform!

What a perdicament! My parents are small business owners and I know you have to really cater to the customers.

Hubby's a FF/paramedic so I have to read this!
cheryl in IL
msboatgal at aol.com

This sounds like a great book for this Hoosier to read, especially this cold winter. : )

Sounds great! Please enter me. I would love to win. I'm from NC.

Sounds great! Please enter me. I would love to win. I'm from NC.

I would love to read this book.Thanks...Jackie Tessnair from N.C.

I would love to win this book and thank you for the opportunity!

I forgot to mention that I am from Southern Arizona

I love a wonderful Christmas book and spiced tea! I've got the tea...just need the book!

HER HOLIDAY FIREMAN looks fabulous. Thank you for the first page.

Enjoyed the first page. Sounds like a fun love story.
Beth from Iowa

Oh, I love the idea of a TV show theme cruise, Castle or Leverage casts would be fun! Please add me to the drawing, thanks.
Merry in TX

Thanks for the opportunity to get this book.
Lyndie Blevins

I would love to win,Enter me!!
Thanks for the giveaway and God Bless!!
Sarah
Blanch,N.C.

Thanks for another wonderful interview and review. Looking forward to reading this book.
Nancee in Michigan
quiltcat26[at]sbcglobal[dot]net

Her Holiday Fireman sounds good. I would love to win it.
sharon m.
san diego, ca

Breanna said...
This comment has been removed by the author.
6:43 PM

So looking forward to reading this book.

I really enjoy Love Inspired books, and I'd love to be able to read this!

I would love to win this book as a Christmas gift for my niece who in real life did marry,
"Her Holiday Fireman".
Janet Estridge
von1janet@gmail.com

"Her Holiday Fireman" sounds good! Thanks for sharing the excerpt!

Please enter me.I would love to win this book.Thanks...Jackie Tessnair from N.C.