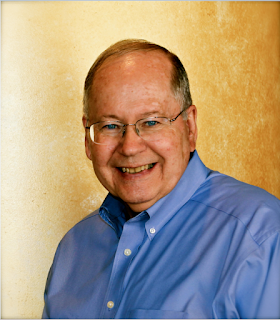 Dear Readers, I know you have been enjoying the romantic medical suspense novels by my friend Richard Mabry, MD. Today, we’re finding out about his latest release.

Welcome back, Richard. How did this book come about?
I’ve read a couple of books about the physician caring for the current President of the , but couldn’t recall seeing much about the doctor assuming that responsibility for an ex-President. Since we have an ex-President living in the area, my curiosity was piqued. So I asked the author’s favorite question: What if? What if an ex-President came back from overseas infected with a disease for which no cure existed? What if a doctor suddenly had the responsibility for this person’s care thrust upon him? And what if the infection also involved the nurse the doctor was dating? The novel sprang from those thoughts.

I like those “what ifs.” Tell us about the book’s cover and what makes it unique.
My publisher, Abingdon Press, has done a great job conveying both the subject matter and mood of my books via their covers. In this case, the look resembles the cover of my preceding novel, Fatal Trauma, yet clearly shows it’s about an infection that requires protective garb of some type.

Please explain and differentiate between what’s fact and fiction in the book.
People may not believe it, but I completed this book before Ebola became nationally known. Because I was plowing new ground, I had to guess about the measures medical professionals would take to avoid the spread of my imaginary infection—much as those initially called on to treat Ebola in the US would later do. As the Ebola epidemic got a foothold in the and became of more than academic interest, some measures of both prevention and treatment were used that I couldn’t have foreseen when I wrote Miracle Drug. In summary, I think it’s valid in some respects, total conjecture in others.

How much research did you have to do for this book?
A lot! As I’ve said, I was making up things right and left, yet wanted them to be believable. I had to walk a fine line between fact and fiction throughout the novel, and this required quite a bit of research.

What are some of the most interesting things you found about this subject that you weren’t able to use in the story?
I discovered that, although Bacillus decimus infections (as detailed in the novel) aren’t real, there are numerous infections in various parts of the world that are just as dangerous—and there are brave men and women who risk their lives every day to combat them.

What inspired and surprised you while you were writing the book?
After the book was written and edited, I followed with great interest the stories of the health care professionals who battled the disease and won, as well as the saga of the patient who came to and succumbed to the infection.

What do you hope the reader takes away from the story?
We’re all human, with frailties and a tendency to think first of ourselves.
When the reader turns the last page of Miracle Drug, I hope they remember the sometimes-silent witness of one of the characters who unselfishly faces death if her sacrifice can help another live.

What is the next project you’re working on?
My next novel, which is already written and edited, is Medical Judgment. It’s scheduled to be released by Abingdon Press in the spring of 2016.

We will want to find out about that one on this blog when it releases. What do you do when you have to get away from the story for a while?
I sometimes escape for minutes to hours into the plot and pages of a novel. Many of my favorite authors are now deceased—people like Robert B. Parker, Michael Parker, and Ross Thomas—but I keep coming back to their work because I love their writing.

I have had a weekly golf game with my friend and attorney for over ten years. That time away from professional responsibilities has been good for us both. We don’t keep score, and purists would cringe at the way we play, but it’s enjoyable…and that’s all that counts for us. 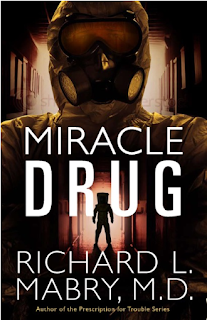 Tell us about Miracle Drug.
Back cover copy:
The infection wasn’t supposed to happen, but it did. The treatment was supposed to take care of it, but it didn’t. Then Dr. Josh Pearson discovered why—the patients had another infection, one that was universally fatal. The only chance for their survival was treatment with an experimental drug, but the manufacturer might already have discarded its supply.

The stakes were high because the patients were the former President of the and a nurse with whom Josh was falling in love. The situation was bad and getting worse by the minute. Overcoming all this would take more than a miracle drug—it would take a miracle.

Please give us the first page of the book.
Dr. Ben Lambert stood at the bathroom sink washing his hands. He sensed more than saw the movement behind him.

“You’re not supposed to be in here,” he said without turning. The intruder didn’t respond. Lambert repeated the words, this time in Spanish. “Supone que no debe estar aquí.”

When there was still no answer, Lambert, his hands wet, the water still running, turned toward the intruder. That’s when he felt it—a sharp pain in his left upper arm. Within seconds a burning pain swept over his extremities. His vision became fuzzy. He tried to reach out, but the commands his brain sent went unheeded by his arms and legs.

With agonizing slowness, Lambert crumpled to the ground. He felt his heart thud against his chest wall in an erratic rhythm, at first a fast gallop, then slower and more irregular. He tried to breathe but couldn’t satisfy his hunger for air. His calls for help came out as weak, strangled cries, like the mewling of a kitten.

Then the next wave of pain hit him—the worst pain he’d ever experienced, centered over his breastbone as though someone had impaled him with a sword. Lambert struggled to move, to cry out for help, to breathe. Through half-closed eyelids, he could barely see a patch of worn linoleum, topped by an ever-enlarging puddle beneath the soapstone sink. Then that vision, and the world around it, faded to black, and Ben Lambert died.

Wow. What a place to leave us! I want to know what happens next, and I’m sure my readers do as well. How can readers find you on the Internet?


My home page is http://rmabry.com. I blog twice weekly at http://rmabry.blogspot.com. I’m on Twitter (RichardMabry) and Facebook (rmabrybooks), as well as some other social media sites.

Thank you, Richard, for sharing this new book with us. As always, it will go to the top of my to-be-read pile.

Readers, here are links to the book. By using one when you order, you help support this blog.
Miracle Drug - Christianbook.com
Miracle Drug

Posted by Lena Nelson Dooley at 7:51 AM

would love to win. Oreo and Angela in KY

Lena, as always, I appreciate your friendship and the opportunity to interact with your blog readers. Thanks for this opportunity.

If this is the first page....I can't imagine how exciting the rest of the book is!
Thanks for this giveaway.
Connie from KY
cps1950 (at)gmail (dot) com

Sounds very interesting. I love your books. I have read all the ones in the public library.

Every time I see this book it makes me want to read it more. I have decided to buy The Tender Scar.

Thank you for the interview and the chance to win Miracle Drug.

Oooh! This sounds intriguing! I'd love to win a copy!
J.C. -Indiana-

This does sound exciting. I'm in.

I am intrigued by this one!

Hi Richard! I so enjoy each interview I've read about you & your books. As I've often said before, I love medical thrillers, think Harry Kraus (which I know is a fellow Doctor friend of yours). I have a copy of "Fatal Trauma" awaiting me on my bookshelf & this one would be a welcomed addition! It does sound quite intriguing from the very first page, and the fact that you wrote it before the Ebola breakout in America is uncanny :-) I know I would enjoy reading this one! Thank you for the chance

I enjoy these books so very much. I would love to read it.
I am a big fan of the author.

Enter me in your awesome giveaway!!
Conway, SC.

I love Richard's books and look forward to reading every one that he writes! Thanks for the giveaway.
Jackie in GA

Thanks to everyone for your comments and kind words--as well as to Lena, for hosting me.

This sounds like an outstanding novel!! It sounds so good - thank you, Dr. Mabry and Lena for the opportunity to win! Jeanie in Phoenix

I would love to win this book. It looks so good.
Thereadmaster@me.com

I would love to win this book. Thanks so much for the giveaway!
bettimace at gmail dot com

Sounds very exciting--thanks for the giveaway!