Christmas at Schoenbrunn in 1773
In the wilderness of in 1773, there were a band of missionaries and Lenape Indians celebrating Christmas at , the first settlement in . They’d come to this wilderness and started the village a year earlier to preach the Gospel to the Lenape, also known as the Deleware.

The missionaries, both white and native families moved from a town in called . Moravians had come to years earlier when a preacher named John Wesley had donated the land to them. But the Lenape had been forced west as more white men had moved into the area, so the Moravians decided to move west with them.

Life was hard in Schoenbrunn. Cabins were quickly made and community gardens were planted that 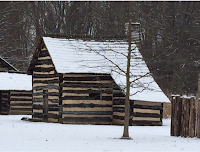 included beans, corn, and squash. Most villages also planted potatoes and turnips next to their cabins. The rest of their food came from hunting. But the real danger came from the many Indian tribes surrounding the village, some of them hostile.

They didn’t have time to build a fence to keep out varments and the first church until Spring, 1773, but they did manage to build a school, the first built in . The school taught both boys and girls, a first for the colonies, how to read the Scripture in their native language and in English. The Moravians printed a Bible in the Lenape language.

The village council was led by David Zeisberger and including white Moravians and Lenape converts. The rules for the village were established by the Lenape Christians. These missionaries did not consider the native converts to be beneath them but instead brothers in Christ.

After a year and a half in Schoenbrunn, the villagers were excited to celebrate their first Christmas. They had many traditions that we still use today. They would have a candlelight Christmas Eve service called a Lovefeast. During this service, they sang Christmas hymns, shared sweet rolls and coffee together, and prayed for each other. The service concluded when they gave each child a bleached beeswax candle and a scripture to hang on their trees at home. The white candle symbolized the purity of Christ and the flame showed that Jesus is the light of the world. A red ribbon would be wrapped around the candle to symbolize how Jesus shed His blood for a lost world.

In every home in Schoenbrunn, families decorated artificial Christmas trees with candles and papers with scriptures written on them. The trees were made by putting together a wood frame and decorating it with real pine branches. The family would also make a putz, a nativity village that included the nativity scene, the wise men, and other Biblical scenes and place it under the tree. Most Moravians gave small gifts at Christmas, but resources were so limited that the children in Schoenbrunn were happy with their candles they received at the church. After a Christmas feast, the family would read the verses hung on the tree and talk about God’s blessings at Christmas.

has been restored and is open to tourists. Find out more at this link (http://www.ohiosfirstvillage.com) . 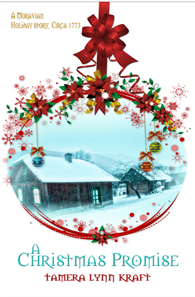 During colonial times, John and Anna settle in an village to become Moravian missionaries to the Lenape. When John is called away to help at another settlement two days before Christmas, he promises he’ll be back by Christmas Day.

When he doesn’t show up, Anna works hard to not fear the worst while she provides her children with a traditional Moravian Christmas.

Through it all, she discovers a Christmas promise that will give her the peace she craves.

TAMERA LYNN KRAFT has always loved adventures and writes Christian historical fiction set in because there are so many adventures in American history. She is married to the love of her life, has two grown children, and lives in .

Tamera is the leader of a ministry called Revival Fire For Kids where she mentors other children’s leaders, teaches workshops, and is a children’s ministry consultant and children’s evangelist. She has curriculum published and is a recipient of the 2007 National Children’s Leaders Association Shepherd’s Cup for lifetime achievement in children’s ministry.
You can contact Tamera online at these sites.
Word Sharpeners Blog: http://tameralynnkraft.com
Revival Fire For Kids Blog: http://revivalfire4kids.com
Adventures in American History: http://tameralynnkraft.blogspot.com
Facebook: https://www.facebook.com/TameraLynnKraft
Twitter: https://twitter.com/tamerakraft
Contests:
Lena Dooley is on Word Sharpeners today for the Christmas Blog Hop at this link and is giving away a copy of her Christmas novel, 24 Christmases.
http://wordsharpeners.wordpress.com/2013/12/13/lena-nelson-dooleys-christmas-stories/
I will give away a digital copy of A Christmas Promise. The Moravians lived a life of giving. To enter the drawing, comment on this post about a charity or ministry doing something special for Christmas.


Click this link (http://wordsharpeners.wordpress.com/2013/12/09/christmas-blog-hop-this-week-129-1214) to hear about how I’m also giving away a Shoenbrunn Christmas Ornament and a copy of my books.
Posted by Lena Nelson Dooley at 1:00 AM

I love what Operstion Christmas Child does! It brings joy to children and presents the gospel message in each language in the booklet included in esch shoe box.

our church serves a Christmas dinner to all the out of state oil/ gas workers who are in our town who cant go home for Christmas.

Charlotte, I love Operation Christmas Child. What a great ministry.

What a great idea, Jackie. I've never heard of anyone doing that, but it sounds like a needed ministry.

Melanie, thanks for your comments.

Lena, thanks for having me on your blog. Lena is also on my blog talking about her Christmas stories and offering a giveaway here. http://wordsharpeners.wordpress.com/2013/12/13/lena-nelson-dooleys-christmas-stories/

We participate in Operation Christmas Child every year. When our church plays the video showing the children receiving their shoe boxes, it makes me cry every time.

Also my husband and I set aside money that we label God's money. Each Christmas time we choose two waitress's or waiters that we feel God is leading us to and we give them a card with money in it. We add a sentence or two witnessing for God's Glory. We also write in the card that this gift was from Jesus and to thank him. We never sign our names. One year we gave a card with a gas card inside to a man who really needed it. It is always done in HIS name.

I put up our tiny tree with my Mum yesterday and we enjoyed reciting the scriptures we hung on it.

Sheila, what a great way to celebrate Christmas

Sam, I love the idea of giving to missionaries at Christmas. This year, we decided to give money to help in the Philippines.

Our church has a prison ministry, one of their projects is providing Christmas gifts of the children of incarcerated parents.

Our family made up 10 boxes for Operation Christmas Child this year. We love that project!!
Beth from Iowa

Our Church has an angel tree for all of our bus ministry children. We also send each one if them home with a CHRISTmas dinner food box for their families.
Tonja VA