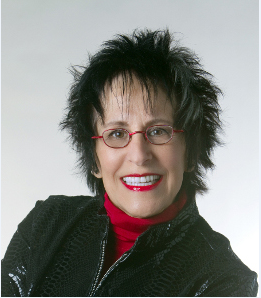 Bio: Our guest is an Author, Speaker, Inspirational Humorist, a member of the Christian Comedy Association and has two released DVDs (“Who put the elephant in my stocking?” and “Been There – Got The Wig!®”).

She is formerly a TV News On-Air Reporter in , and College Professor of Broadcasting Arts and Speech Communication.

Jana’s an ovarian cancer survivor and founder of the BEEN THERE – GOT THE WIG!® Breakfast Club & Ministry, who shares her story of challenging her battle with fear using humor, a positive attitude, and faith to inspire others to never give up!

Welcome, Jana. Tell a little about your background in battling fear.
I was misdiagnosed for a year, went into hospital for hysterectomy, and when I awoke two days later I was told they found ovarian cancer which had spread to stage 3c. I was cut from the pelvic bone all the way up to my ribs and has over 80 staples. I spent 1 month in rented hospital bed at home before starting 5-months of chemotherapy, followed by a 2nd major operation using the same big cut, and another month in rented hospital bed at home. But greater than my physical challenge, was dealing with my response to the doctor’s words “cancer,” “chemotherapy,” “surgeries,” each one hit me like a sock in the nose. In that moment, to my dismay, decades of faith were chipped away and I was down for the count. My biggest battle was not against cancer, but fear that overwhelmed me, robbed me of hope, and threatened to defeat me.

In your book Fight Fear and Foster Faith you provide practical tips to KNOCK OUT FEAR and move forward, what are the 3 most important things someone who’s facing a hardship can do to fight fear?
Adopt a positive attitude, program your heart/spirit for victory not defeat, add humor to your life.

What can one do to acquire and maintain a positive attitude?
Hang out with positive people because hope is contagious. And avoid negative people, even if they’re related. Avoiding negative people’s comments is key to fighting fear, which is produced by believing the wrong things. Seemingly innocent remarks, like “There aren’t any jobs out there, nobody’s hiring,” can be as a fiery dart that plants seeds of fear in us.

How can you ignore a comment you’ve already heard?
That can be a battle, but you can win that struggle by not meditating on the negative thought, by not repeating it, and by countering the negative messages with positive statements/thoughts.

Why is it important that we counter negative comments with positive statements?
It is important because words not only reflect our attitude, words can shape our attitude. Positive speech promotes positive attitude. Accenting a positive aspect of a situation can have beneficial results. Even a child can do that.

For example, my 8-year-old granddaughter, Zoe, went to a donut shop for a treat with her mom. She was told she could choose one donut, but instead, she picked up a CUPCAKE and insisted her mother buy it. “We’re not buying CUPCAKES today,” her mom responded, “And besides, it looks like someone licked this one.”

The expression on the 8-year-old’s face betrayed her. Her mom was aghast that she had sampled a snack they hadn’t paid for; and upset that they now had to pay for the damaged CUPCAKE. After being advised she would not be allowed to eat the CUPCAKE, nor any other treat that night, Zoe was pulled from the shop. Those famous words “just wait ‘til your father comes home!” were hanging in the air.

At home, Zoe sat in time-out and meditated on her crime while she waited for her father to arrive. When my stepson walked through his front door, she joyfully jumped to her feet and announced, “GOOD NEWS, DAD! There’s a CUPCAKE for you.”

She knocked out her fear with her positive words, put a positive spin on the situation, and taught us a valuable lesson. That lesson is: don’t lick the frosting unless you’ve paid for the cupcake.

Why is humor and laughter important in the fight against fear?
Humor is a powerful weapon against fear because it can defuse or lessen fear by redirecting our focus onto the something light-hearted. Laughter lifts our spirit, when we laugh we feel better, and when we feel better, it’s easier to have hope.

How does laughter make us feel better?
Laughter releases natural pain-relieving endorphins in our body, it activates our immune system, reduces stress hormones. Laughter is life’s medicine. Laughter can help us to see the light at the end of the tunnel as we’re going through tough times and keep us from throwing in the towel.

Tell about couple examples of finding humor in your hardship.
Soon I noticed that people reacted differently to me when they’d heard I had cancer. One lady came up to me in church and apologized, “I’m sorry that I didn’t get to know you,” and she left. She just missed her 2nd chance.

Another woman approached me said “I’m sooo glad I’m not you.”

“What does it feel like knowing you’re going to die soon?”

I think they meant well, so I wasn’t offended, but their remarks suggested maybe there’s a Cancer Card to be played here: I went to a camera store to return an expensive cable and was told that I would not get a refund because the 7-day grace period had passed. So as the manager turned to walk away, I blurted out “I’m a cancer survivor!” and lifted my shirt to show him my huge scar.(SHRUG)

I flashed him. Well I can never go back to that store again. The worst of it is ... now I’m not sure why I got the refund! This could revolutionize shopping as we know it!)
Where can people find out more about your book and public speaking?
My website is www.janaflaig.com.)

Final comment:
Don’t let fear defeat you. Put on your boxing gloves, jump in the ring and fight fear!

Thank you, Jana, for visiting with us today.

Readers, here’s a link to the book. By using it when you order, you help support this blog.
Fight Fear and Foster Faith: Gain the Hope & Courage You Need to Overcome Difficult Circumstances

If you’re reading this on Google +, Feedblitz, Facebook, Linkedin, or Amazon, please come to the blog to leave your comment if you want to be included in the drawing. Here’s a link.
Http://lenanelsondooley.blogspot.com
Posted by Lena Nelson Dooley at 6:41 AM

I admire your approach in writing and talking about cancer. You are right some people mean well but miss the mark in commenting and their approach when they talk to people who are in this battle.
I am 4 yr. survivor and my late husband was 11 year survivor who passed 1 1/2 years ago. I would be honored to read your book. Prayers & Blessings to you
Ohio
mcnuttjem0(at)gmail(dot)com

Jana, I love the fact you can turn fear into faith. I have had melonia twice in the same place on my face and had to have plastic surgery twice. Would enjoy reading your book.
plhouston(at)bellsouth(dot)net
Mississippi

Hello Melanie.
Out of state company left this morning,so first time in 2 days to turn on computer. I'm delighted to hear from you.
Hope you had a Merry Christmas! Wishing you a Happy New Year 2014!

Jackie, Prayers and Blessings to you too! My husband is also a cancer survivor. Now we both know each day is a gift. And each day with eyebrows and eyelashes = a plus.
Praising God that you are a 4-year survivor!

Hi Patsy, Wow--cancer & plastic surgery twice. People watch us to see how we face "the Big C" and the fear that comes with it. You are a hero (even if you don't feel like one sometimes).

I would love to have this book for my mom who is undergoing treatment for breast cancer while trying to take care of my dad. fishingjan@aol[dot]com I live in Texas

Dear Jana,
I have been there and done that so I can really relate to the title of your book.
Thanks for giving me the opportunity to win your book.
Janet E.
von1janet(at)gmail(dot)com
Florida

My husband is also a cancer survivor! You definitely have faith and that is what has carried you through.
Beth from iowa