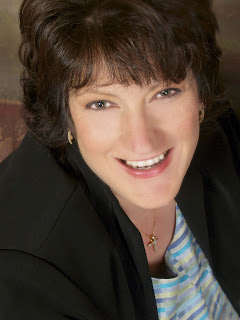 Welcome back, Linore. Tell us about your salvation experience.
I got saved in a confrontation very similar to what Richard experiences in RESILIENCE, when asks him the simple question, “If you died tonight, would you go to heaven or hell?” It started a dialogue that led me to the Bible and eventually, to following Jesus. For me, coming to faith in Jesus Christ was the beginning of learning how to live. Jesus quickly began changing the course of my life, and since then, I have been blessed beyond measure.

You’re planning a writing retreat where you can only have four other authors. Who would they be and why?
Well, I just did a retreat with seven other authors, and found that It’s hard to write when instead you can talk about writing! I think I'd prefer just one other author unless my aim was to pick the brain of a writer I admire. (That one author I’d enjoy doing a retreat with in order to actually get writing done? My best retreat buddy, fellow Ohioan author Teresa Slack.)

Do you have a speaking ministry? If so, tell us about that.
I've done speaking engagements in the past, but I took a sabbatical to concentrate on writing and homeschooling. Likewise, I love to do workshops for writers, but haven’t been doing them recently for the same reason. I hope to start up again in the near future.

What is the most embarrassing thing that has happened to you and how did you handle it?
The "most" embarrassing might not fit here, but once when my husband and I had just started dating, we were seated in a crowded, pricey restaurant for lunch in . I picked up a glass of ice water and somehow proceeded to drop it—water and ice went everywhere, including all over me. My date, (my future husband) was watching to see how I’d react, so I looked at him as though I was completely unfazed—and smiled. He later told me how surprised he was when I remained so cool about it. For me, it was either "act cool" or die of embarrassment!

People are always telling me that they’d like to write a book someday. I’m sure they do to you, too. What would you tell someone who came up to you and said that?
First, I help them explore whether they really mean it or not (because many people say that, but few really mean it). If they do, I try to encourage them and often give information on local writers’ groups and things like that. That’s my usual. But I have a big exception to the rule. If I’m on the last legs of a book manuscript, for instance, when my schedule is crazy busy due to writing, I might say, “Poor you! Don’t write unless you’re called to it!” (And then I encourage them, honest!) 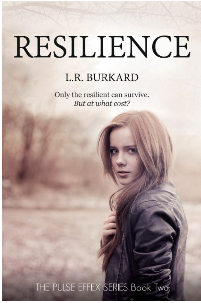 Tell us about the featured book.
RESILIENCE is the sequel to PULSE. It’s Book Two in the Pulse Effex Series—an apocalyptic YA exploration of the aftermath of an EMP that renders the United States powerless—literally. There is no electrical grid, no technology that still works, and the story unfolds through the eyes of three teen girls who tell what their lives have become—in a country without internet, cell phones, grocery stores, and lights, to name a few. The thing about this series is that the idea for it—that an electromagnetic pulse can send the country into the dark ages—is not fiction. Not only can it happen, but just yesterday a headline told us that now has satellites above our nation that can cause such a thing to happen. Ted Koppel’s book, LIGHTS OUT, tells how it can be done. My books show what it will look like.

Please give us the first page of the book.
It’ll be a teaser, but you asked for it..

I knew before we left that something was wrong, but Richard never listens to me.  It was dusk, time to get moving.  Most people stay in after dark, which is why we travel at night. It's safer this way. People are the primary threat. Not regular, normal people like your grandmother or neighbors, or kindergarten teacher; those people are mostly gone. All the nice ones, gone! The ones left? They're the reason we move at night.

“We don’t have time, Sarah.” I looked up at my brother, my only family in the world I know for sure is still alive now that the EMP has sent our country into the dark ages.

He frowned as I hurried to scribble a few more lines in this journal, one of my meager belongings I’ve held onto from the time life was normal.  Since before the EMP—the electromagnetic pulse that took down the power grid of the nation.
We had slept in an abandoned barn, on old, dusty hay. It was far cleaner than other places we’d slept in recently. Richard brushed hay out of his hair, and pulled a comb from his back pocket. I have to hand it to him—he’s grown a beard, but still manages to stay neat and groomed. His hair is short—he shaved his off not long after I shaved mine and for the same reason—lice. But unlike me, he looks good with the crew cut, like a military guy off duty. Except Richard is on duty. He’s always on duty. Life is too dangerous to ever relax, ever let down our guard.

“C’mon, time’s up.” My eyes met Richard’s and I sighed, shutting my book and letting him pull me to my feet. I knew he was right. I could hardly see what I was writing in the fading light. I shoved my journal and pen into my purse, strung it around my neck and tied it across my torso, close to my body. I shook hay off and pulled on my coat and zipped it, hiding the purse. Richard had already replaced his knife into its ankle holster, checked the pistol in his pocket, and was ready to move on. He slung the military-issue daypack over his back, then his rifle, and nodded at me.

Sometimes it was hard to remember this was Richard, my brother who had gone off to college and come home thinking guns should be banned. Or that building a strong military was foolish. Now he looks for firearms all the time. Sometimes we find them on fallen bodies … that’s all I can say right now about that.
[For more of a sneak peek, readers can download the first two chapters here]

Interesting. How can readers find you on the Internet?
Right now I have two websites, which reflect the two genres I write in. By next year, I hope to be unveiling a single integrated site. For my YA/Futuristic novels, the Pulse Effex Series, I’m at http://www.LRBurkard.com.  For my historical romance, I’m at http://www.LinoreBurkard.com I’m also on Facebook, Twitter, LinkedIn, and GoodReads. To be among the first to hear of new books or contests and giveaways, readers can join my newsletter mailing list. (I don’t send a lot of mail—ever—and I don’t share my list!) They can sign up at either of my websites.

Thanks for having me on the blog,

If you’re reading this on Goodreads, Google+, Feedblitz, Facebook, Twitter, Linkedin, or Amazon, please come to the blog to leave your comment if you want to be included in the drawing. Here’s a link:
Http://lenanelsondooley.blogspot.com
Posted by Lena Nelson Dooley at 7:55 AM

angela in ky would love to win

Hi, how many books are planned for this series?

This series sounds intense and would love to read it. Thanks for the giveaway.

This sounds like a thoughts provoking book. Thanks for sharing!
Connie from KY
cps1950(at)gmail(dot)com

Thanks for your interest in The Pulse Effex Series. As of now, there will be three to four books. (Three, definitely, four possibly.)
If I do four, who knows--by that time I may wish to do another!

Would love to read this series. Thanks for the interview.
Brenda in VA

I am intrigued by the premise of this series. I really liked Terri Blackstock's Restoration series and this sounds like a similar topic. Thanks for the interview and the giveaway!

The Pulse Effex series sounds so interesting and scary if it happened!
Merry in MN

I'd like to be entered if there's still time.

It's been Linore's tweets about Pulse that have really gotten me interested in this series. Reading Jolina Petersheims book The Alliance, which also deals with the aftermath of an EMP also sparked my interest in Pulse and Resistance.

My husband and I have a little homestead here in Central Arkansas. While we are not "preppers" our friends like to tease us that if there is an economic collapse or a zombie apocalypse that they will be coming to our farm.

Hi linore & Lena! I really enjoyed Pulse so I'm very much looking forward to this next chapter in your Pulse Effex series!
Kristen in OK

Thank you all for entering the contest. I'm happy to see the interest in my series because raising awareness of the threat (of an EMP) was the prime motivating factor for me to write the books. I'm not sure when Lena will close the comments and draw a winner but I wish you all good luck! Remember, if you don't win, the kindle copy is only $3.99--or, to know of other contests I'm doing, join my mailing list at my website: http://www.LRBurkard.com. I won't send you a lot of mail or share your email, ever.
Thanks!