SONG OF THE PRAIRIE - Vickie McDonough - One Free Book

Dear Readers, I was privileged to read this book for an endorsement. Song of the Prairie is a satisfying conclusion to Vickie’s Pioneer Promise series. I’ve loved the Harper family all through the series, and each of the heroines has brought a different dynamic to the family. I think you’ll love it as much as I did. 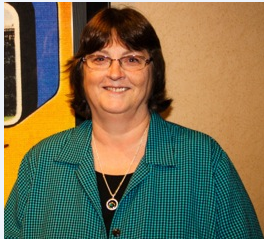 Welcome back, Vickie. How did this book come about?
I visited the Mahaffie Stage Stop in , , on a research trip, and got the idea for a story about a family who ran a stage stop along the . Song of the Prairie, which is set in 1870s , is the third book in my Pioneer Promises series, a saga about the three Harper brothers. I’ve written Ethan’s and Josh’s stories in Whispers on the Prairie and Call of the Prairie, so it’s time for Aaron’s. He’s the oldest brother, a widower with two young children.

Tell us about the book’s cover and what makes it unique.
The sunflowers represent , but the picture of the woman and child is what makes it special. She sacrifices her dream to protect her cousin’s baby from his cruel father.

Please explain and differentiate between what’s fact and fiction in the book.
I placed Harpers fictional ranch on the real , which thousands of pioneers traveled in the years before the railroad crisscrossed the country. Rabies is a real disease, as we all know, but in the 19th century, if a person contracted it, it was a death sentence. There was no treatment for it. Some of the towns are real places, but Windmill, , is fictional. The rest of the story is pretty much all made up too. It is fiction, after all.

How much research did you have to do for this book?
Since this is the third book in the series, I didn’t have to do as much research for it as with the other two. I did study up opera and musical terminology for the heroine’s story and on rabies and how it affected bitten animals and people. Writers sure look up some strange things.

Yes, we do. What are some of the most interesting things you found about this subject that you weren’t able to use in the story?
I found the research on rabies rather interesting. It’s a horrible disease, and people who contracted it back in the 1800s suffered terribly. I chose not to show this in my story and opted instead to have a character die quickly after he has an encounter with a rabid coyote.

What inspired and surprised you while you were writing the book?
Aaron, the hero, is a good man. He’s the oldest of the three Harper brothers and used to being a take-charge, responsible man. He was extremely kind to Janie after Paul’s death, and helped her a great deal, even though he was wrestling with his own problems. He freely opened his heart to Benji, Janie’s adopted son, and he’s a fine example of a godly man.

What do you hope the reader takes away from the story?
I hope readers will see that no matter what they are going through—no matter how hard the circumstances in their lives are, God is always ready to help them if they call on Him.

What is the next project you’re working on?
I’ve just finished Gabriel’s Atonement, which is book 1 in my Land Rush Dreams series. That series centers around two of the land runs and the land lottery. Gabriel’s Atonement releases in January. I’m also working on a novella for a summer collection called The County Fair Bride.

What do you do when you have to get away from the story for a while?
Several things. My sister and I have a booth at a vintage/antique mall, and I like to shop for things to sell in it. Sometimes I paint on a project for the booth. I also dabble in stained art, but my favorite get-away is probably to get lost in the pages of someone else’s book.

Please give us the first page of the book.
September 1874

Juliet Fairchild bounced on her toes, nervous anticipation making her limbs quiver, as she waited off stage to hear her name introduced for the first time. Years of training and sacrifice had brought her to this moment—her debut performance in ’s opera house. A crescendo of applause heralded her entrance. A grinning stagehand winked, tipped his cap, and tugged the curtain open, and she walked onto the stage. Exuberant cheers and whistles joined the ovation. Smiling, Juliet curtsied and glanced up at the private box seating to her left where her parents sat, but shadows greeted her instead of their happy faces. The audience’s clapping shifted, taking on a repetitive tempo.

Juliet blinked as her dream faded. Her eyes focused on the moonlight peeking through the opening between the curtains—her bedroom curtains. She wasn’t in an opera house, preparing for her debut performance, but in her small rented room down the street from the music school where she taught voice lessons to young girls from affluent families. Though the chimes of the church bell down the street signaled five in the morning, the overly warm room was still shadowed in darkness. She bolted up from her bed, suddenly aware it wasn’t applause she heard but knocking.

And she wasn’t Juliet Fairchild but plain Jane Dunn, teacher at Boston Academy of Music for Young Women.

Yawning, Janie tugged her robe over her gown and hurried across the room. Who could possibly need her at this hour?

She unlocked the door and pulled it open just far enough for her to see out. “Who’s there?”

“Mazie?” Her mind ran through her list of new music students and fellow teachers, but she couldn’t remember anyone with that name.

The woman took a step back, and in the faint illumination of the lamp the landlady had placed on the hall credenza to help boarders to find their way downstairs to the privy, she recognized the dark-skinned young woman who worked for her cousin Carolyn.

Janie’s heart pounded a hard staccato beat. She pulled the door back and motioned for the maid to enter, then lit her lamp. “Has Carolyn gone into labor?”

Mazie flipped back her cloak, revealing the bundle she held. Tears glistened in her eyes. “Yes, ma’am, but she done had d’baby.” Mazie sniffled and held out the blanketed package.

“What this?” Janie shook her head and stepped back, fearful of the thought that charged across her mind.

“What?” Janie crossed her arms. “Why did you bring it here?”

Thank you, Vickie, for letting me share this new book with my readers.

Posted by Lena Nelson Dooley at 7:04 AM

Email ThisBlogThis!Share to TwitterShare to FacebookShare to Pinterest
Labels: Song of the Prairie, Vickie McDonough

Song of the Prairie is such a great title. It definitely pulls me in to read this book. It sounds wonderful and I can't wait to read it.

Thank you Vickie and thank you Lena!

I loved Vickie's interview and would be thrilled to win a copy of SONG OF THE PRAIRIE! I know it's a wonderful story! Thank you so much for the chance to win.

Thank you for the chance to win this book. It sounds like a great read.
Susan in Texas

Thank you for the interview with the lovely Vickie.
Amy C
VA

would love to win. Angela in Ky

There are so many different things going on in this story. I would love to see how you put it all together. Jan in sunny West Texas

I've been a fan of Vickie's since reading her Texas Boardinghouse Brides series. I'm looking forward to starting this series- it's always fun to follow a family throughout a series!

Thank you for the fabulous first page.

I've adored this series by Vicki! Just reading the preview of Song of the Prairie, my heart is moved. I know I will love this one.

Would love to win Vickie's book.

I loved Vickie's writing! Thanks for the interesting post! I would love to win.

Hi everyone! I see some names I recognize here. I'm glad Song of the Prairie sounds intriguing. It has some suspense in it, as well as a lot of leaning on God during hard times. Thanks for stopping by today!

Love all of the books I've read by Vickie!
Lancaster County, PA.

What a surprise to open your door to!

The first page pulled me right in!!!

thanks for the chance to win Vickie's book
live in ND

It's exciting to so many of my fans here. Thanks so much visiting Lena's blog this week and for reading my books. Blessings!

Any book of Vickie's I want to read and review. They bless me so. Bless you Vickie.
jrs362 at Hotmail dot com

I'd love to win a copy of this book. I'd buy it on the cover alone!!

Looking forward to reading this series! I enjoyed reading about some of Vickie's research for her books! Kelly from Virginia

Vickie McDonough is a favorite author of mine. Will enjoy this book.
Beth from IA

Thanks, everyone, for stopping by Lena's blog and reading my interview. I hope you'll consider signing up for my newsletter. You can do that by visiting my website. There's a sign-up link on the Home page below the navigation bar.

thanks for the giveaway!
Sydney Harries GA

Great interview. Would love to win and read this book. I read the first book of the series and really enjoyed it. Thank you for the chance to win a copy.
Karen G, NY
kmgervais(at)nycap(dot)rr(dot)com

Nice interview. Song of the Prairie sounds like another great book. Thank you for the opportunity to win a copy.